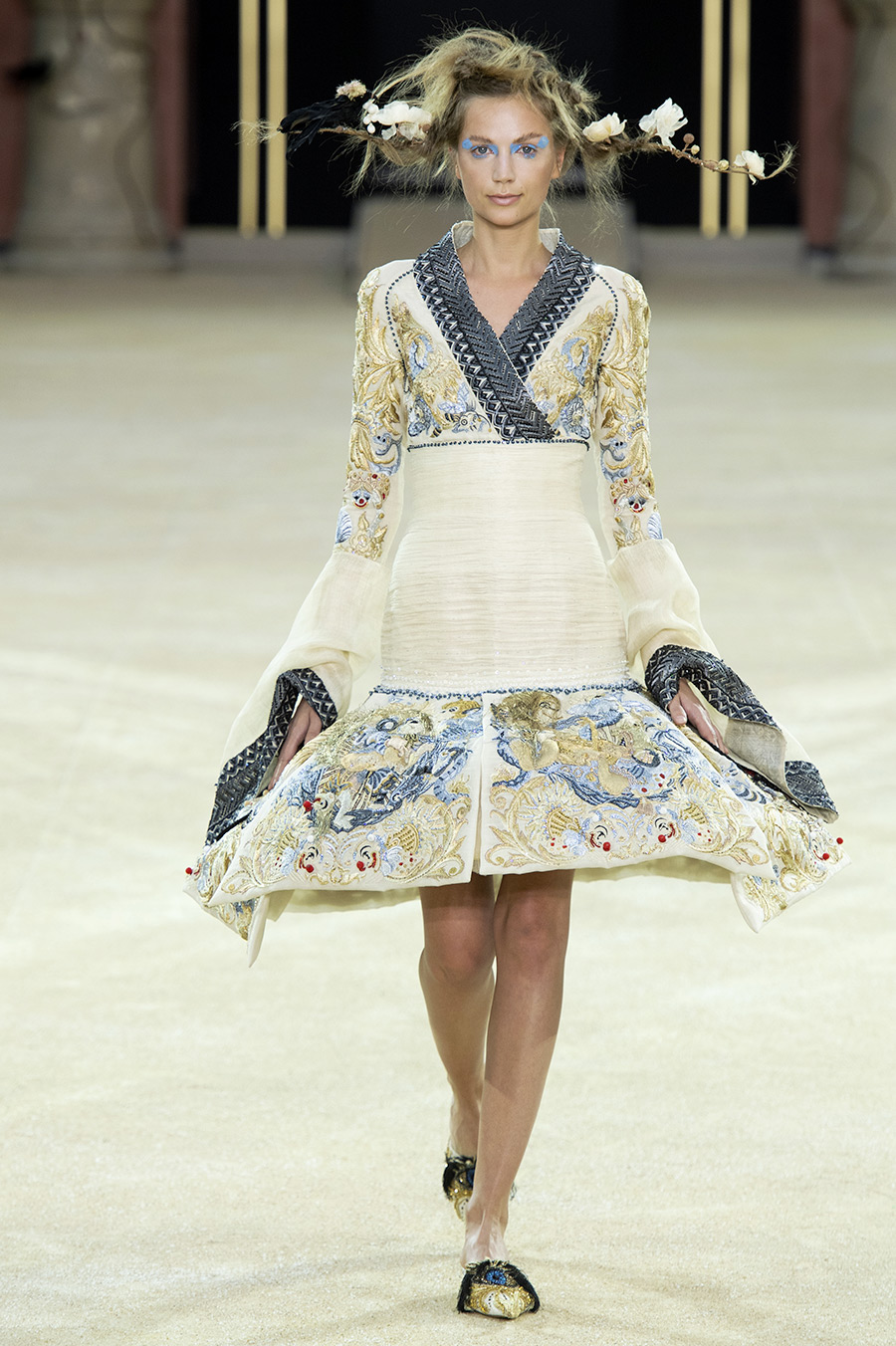 Guo Pei lights up the world of Haute Couture with her fantastic embroidered works. She was kind enough to answer a few of my questions – Thank you!

All photos come from Atelier de Guo Pei and are copyrighted.

Guo Pei was born in 1967 and showed great artistic talent very early on. In 1986 she graduated from the Beijing School of Industrial Fashion Design. She won numerous awards for her work and was named one of China’s five top designers by Japanese magazine Asahi.
She founded her Rose Studio in 1997 to train a new generation of embroiderers based on ancestral Chinese techniques while opening them up to the future with her incredible creativity.

Since 2006, she has participated in the great fashion weeks and each time her creations are a revelation. She opened a salon in Paris in 2015.

In a world where change is essential, where speed is an integral part of creation, Guo Pei denotes. Her dresses, her works require thousands of hours of work from the embroiderers who stitch them. It sometimes takes two to three years for a work imagined by the artist to finally see the light of day.

Meeting with an artist of the extraordinaire –

What is your history with embroidery?
It was my grandmother who raised me. She was born under the last dynasty, the Qing (1644-1912) and kept telling me how, in her time, flowers and butterflies were embroidered on fabrics. I couldn’t believe it, I couldn’t imagine this art. But my grandmother told me so much about it that, even without ever having embroidered myself, I knew it was an essential technique for expressing beauty.
In 1997, when I created my business, I started to get interested in embroidery. At the time it was all about jeans and sunglasses, plain or printed fabrics on which the embroidery appeared very little. I found a piece of traditional embroidery and wanted to use it in my creations. 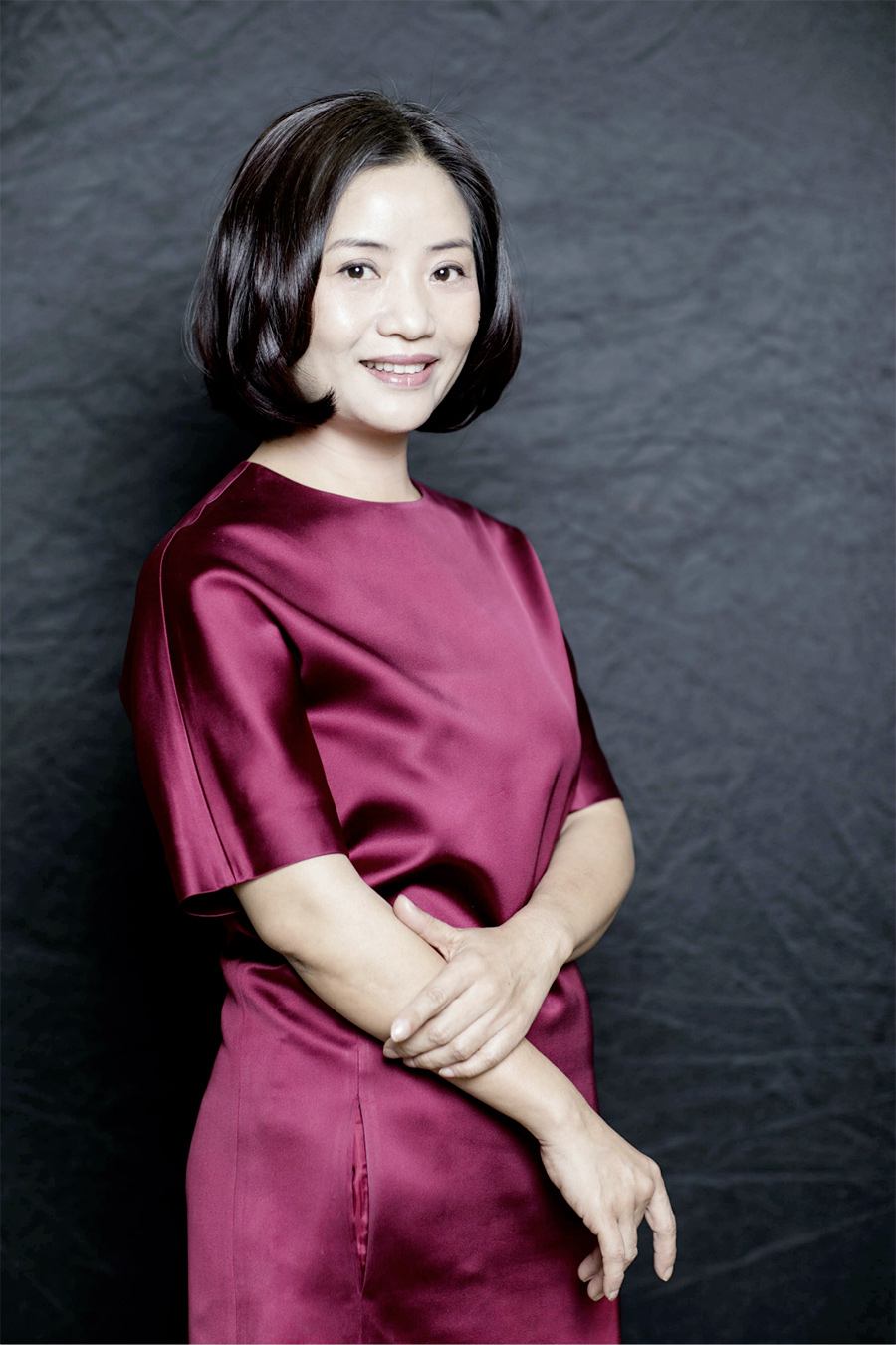 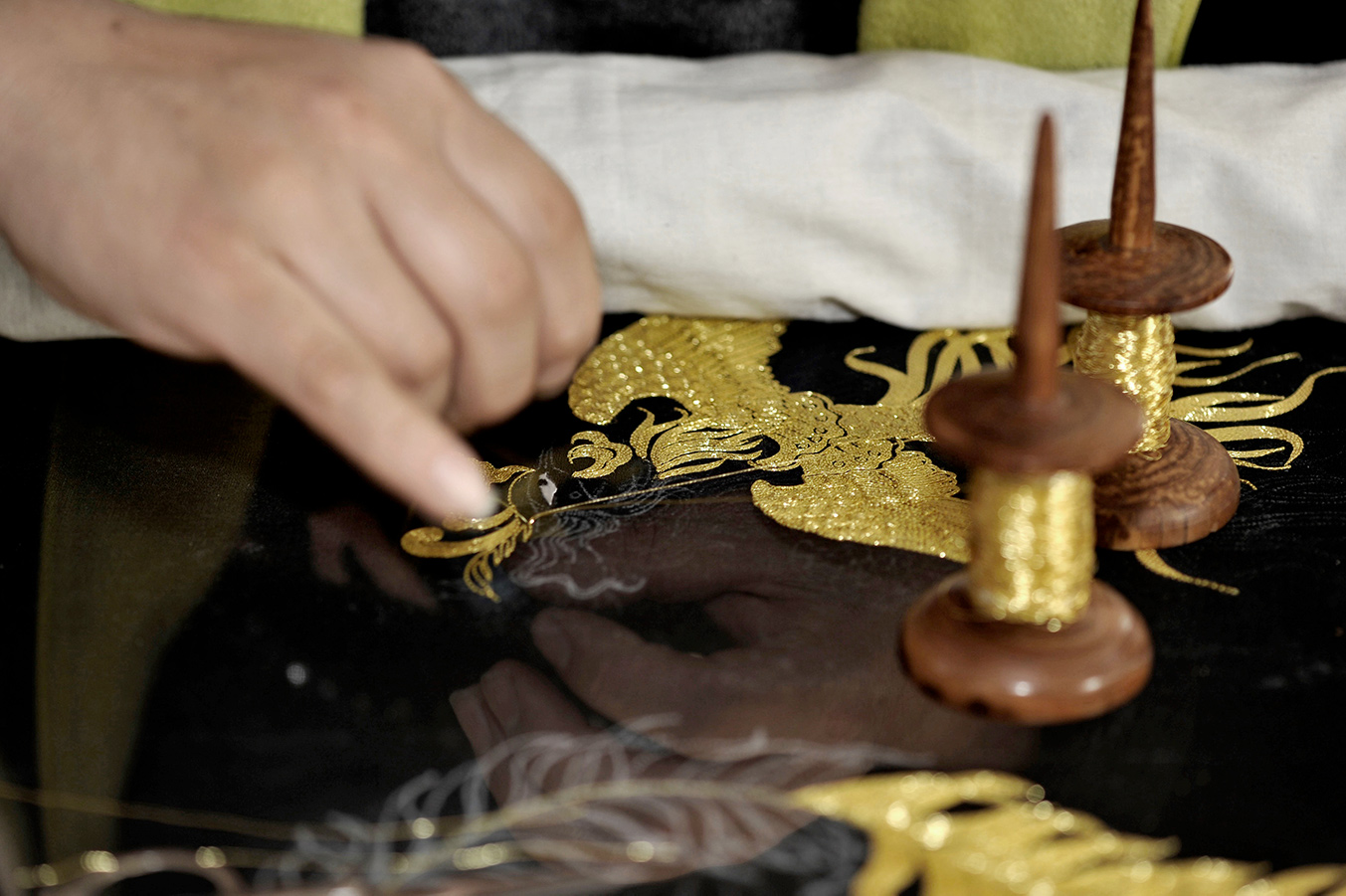 I’m actually quite traditional and like to look back for inspiration. I love to visit museums. In Paris, Singapore or Switzerland, there are many museums on traditional arts. I spend a lot of time there, observing these parts carefully, especially what is not normally seen (the back for example).

What are the techniques, the supply you use?
All of them – from China and elsewhere. I am curious and I like to mix techniques, old and new, and even create new ones. The important thing is to be able to express something, an emotion, a theme. 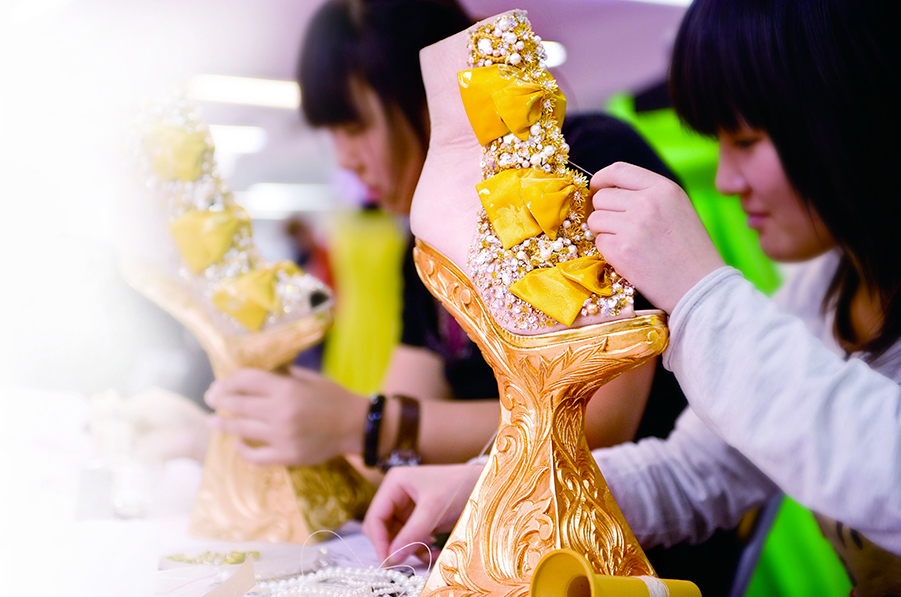 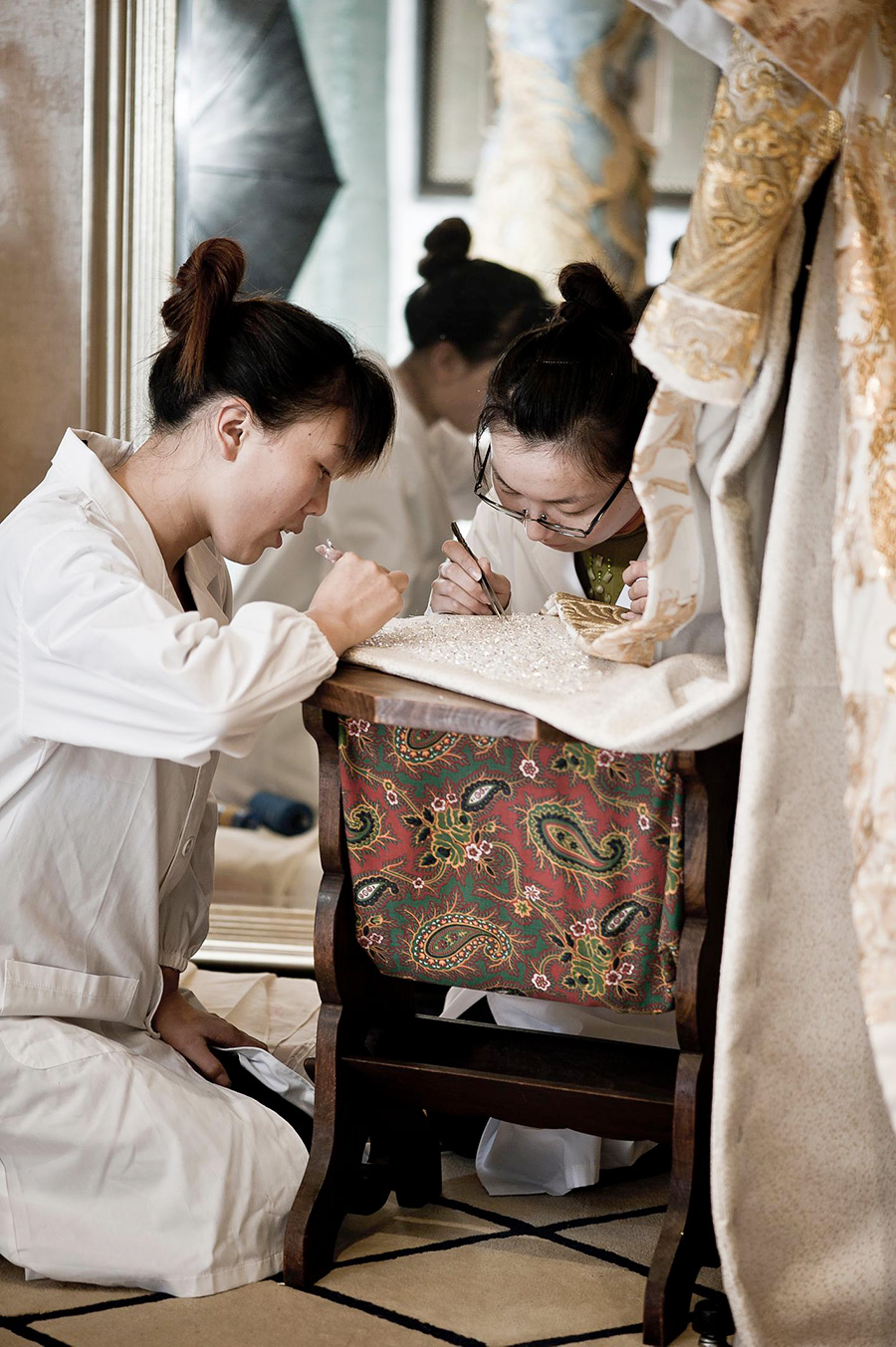 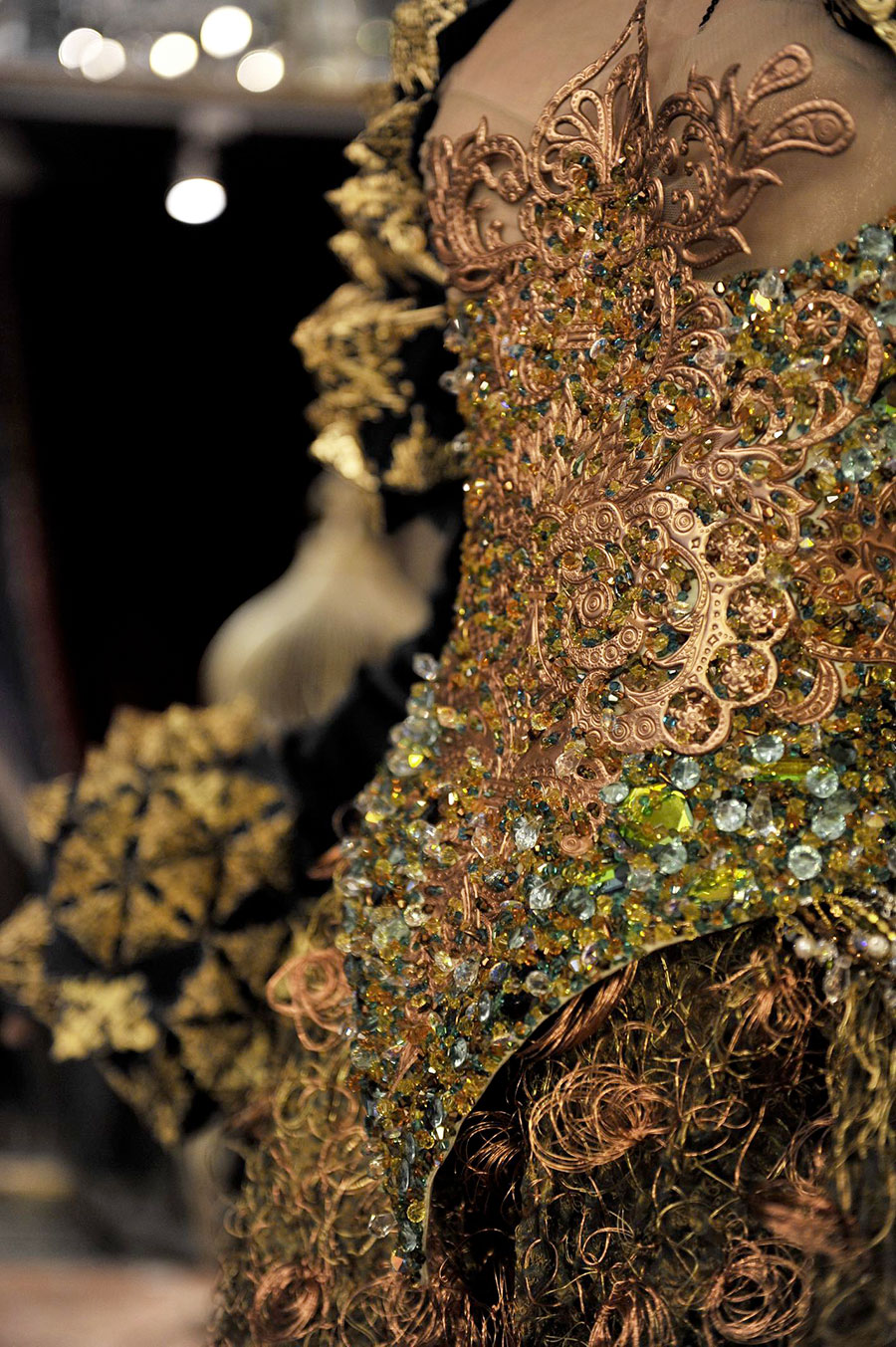 I like to work with beautiful materials. I order my fabrics from the best factories, like Jakob Schlaepfer, which often have a long history. For my Legend collection, I used all the stock of gold thread that was left in a small shop in the Marché de Saint-Ouen, run by a lady over 60 years old. Her father had opened the store and worked with the world of haute-couture. The threads were no longer produced and I found it interesting, even symbolic, to use the latest spools for this collection to make them a Legend as well. For my East Palace collection, I used fabrics from Tamiya Raden, a Japanese boutique that has been around for 2 generations and provides the finest kimono fabrics in Japan.

One day I saw a uniform from Napoleon’s time, adorned with beautiful patterns embroidered with gold threads. I was touched by the care the couturiers had taken to create this garment even as it was about to be worn on a battlefield. This respect gave life to Dajin (Magnificent Gold). I searched for this type of yarn around the world and ended up finding a yarn wrapped around an empty heart. But you couldn’t get it through the fabric, you had to couch it down. We have implemented a special technique to couch the thread and create relief patterns. The work looks like the sun, brightly shining – exactly what I wanted to express Eternity. 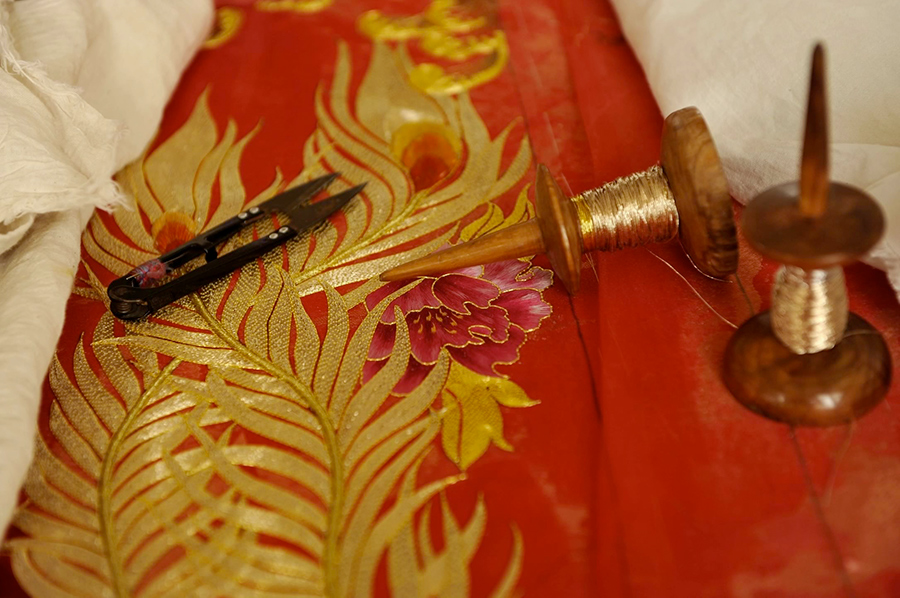 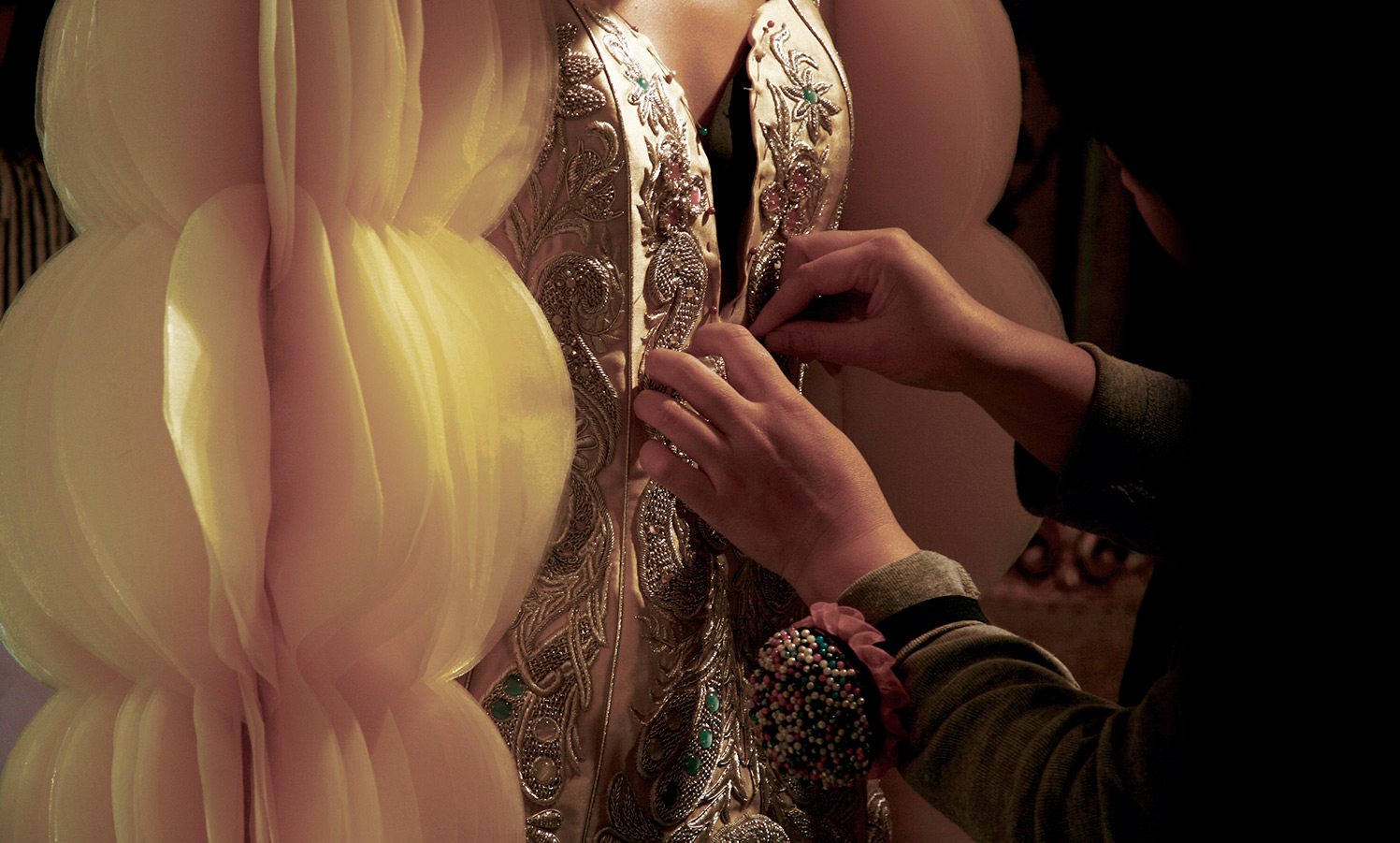 After that, I created Xiao Jin (Little Gold) with gold threads as thin as hair. But these threads are so fragile that you had to keep threading new needles. Each thread could be used for 6 to 7 stitches only! Our patience was severely tested! But this experience has helped us to invent a unique method to create designs with this kind of thread.

Tell us about the Rose Studio
I love the eternal beauty of roses! By choosing this name, I had the hope that my designs will become so too.

In fact there are several teams at the Studio – the embroiderers, the decorators, the designers, etc. There are around 500 people working there, either in Beijing or in workshops around the city. 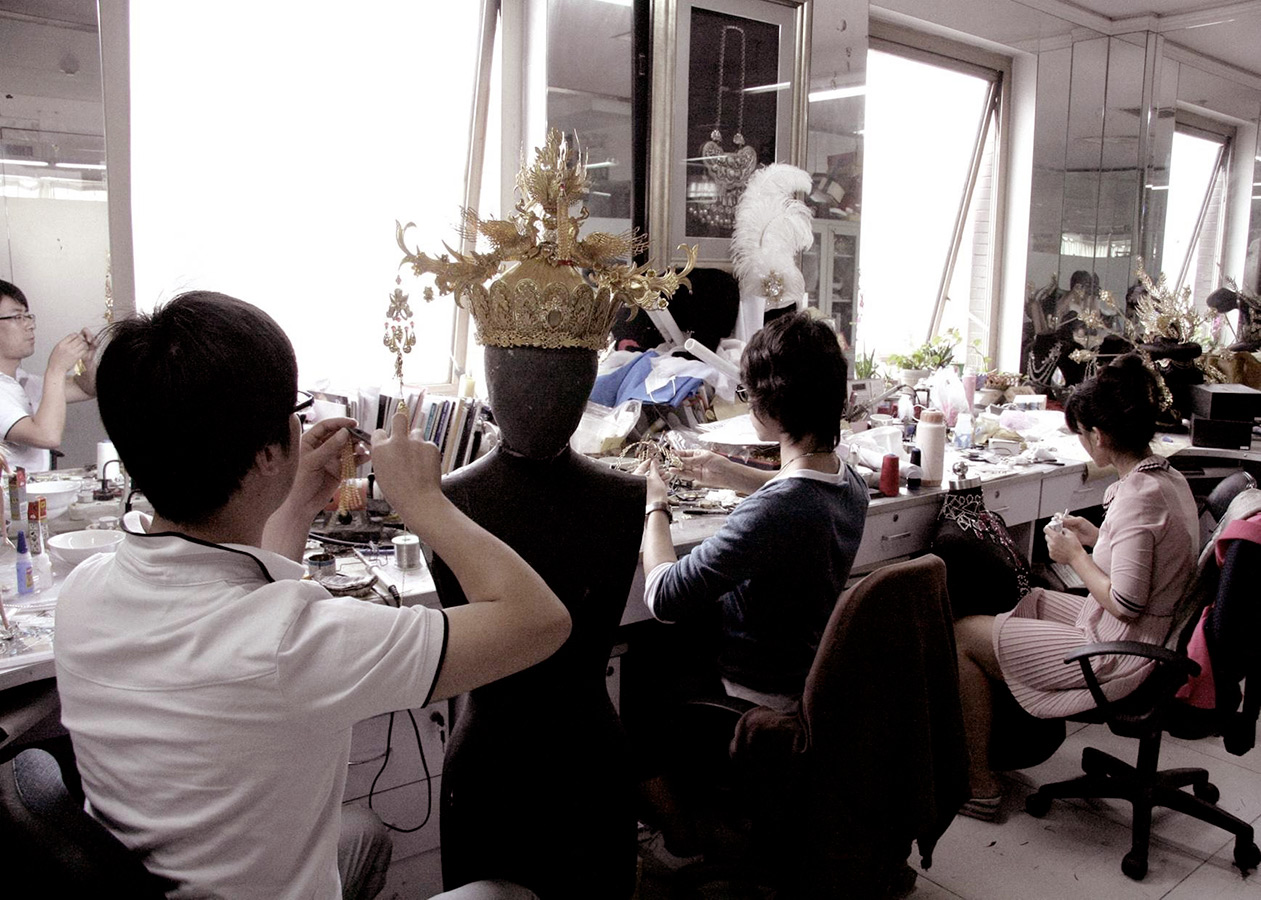 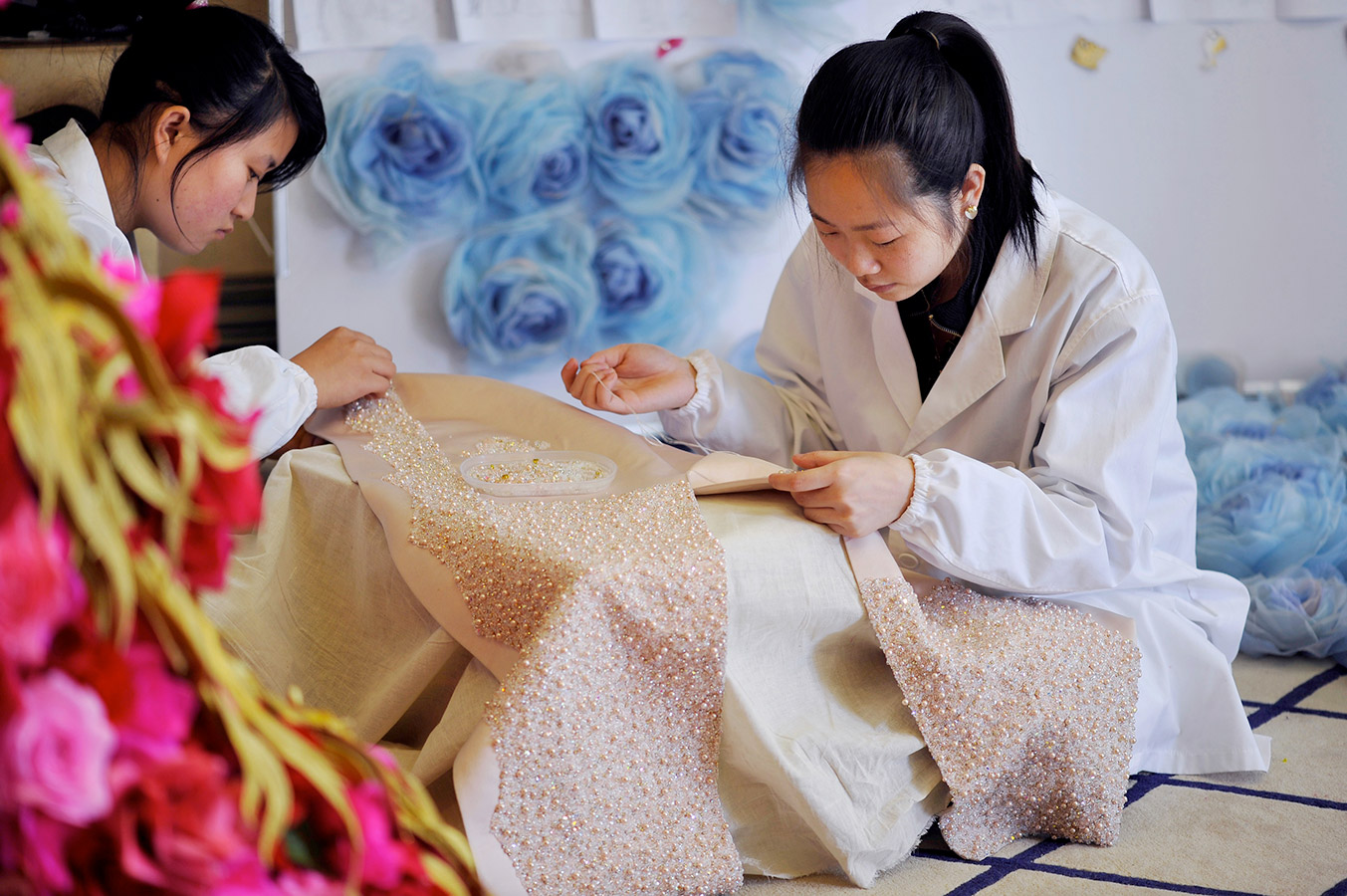 It is primarily a workshop, but we have developed a collaboration with the Beijing Industry and Trade Technician College. We offer them teachers but also internships or even work places.

Since the Studio opened, I have noticed that the number of people and students interested in embroidery is growing. There are also more and more schools or institutions related to this art. Embroidery is part of the intangible heritage of our culture and in this sense it is starting to receive a lot of attention as well. For me, these reactions are essential because embroidery is a magnificent part of traditional Chinese culture. In addition to the official support, I find it essential that designers open up new avenues to make this art known, that they use tradition in new contexts.

I’ll end this interview with this quote from Wendi Murdoch, in The Times, 2016: “Guo’s influence in fashion and culture is enormous, breaking down the barriers between East and West. No matter where you come from, you feel an emotion in front of her works. This is the very role of art: to touch us. “ 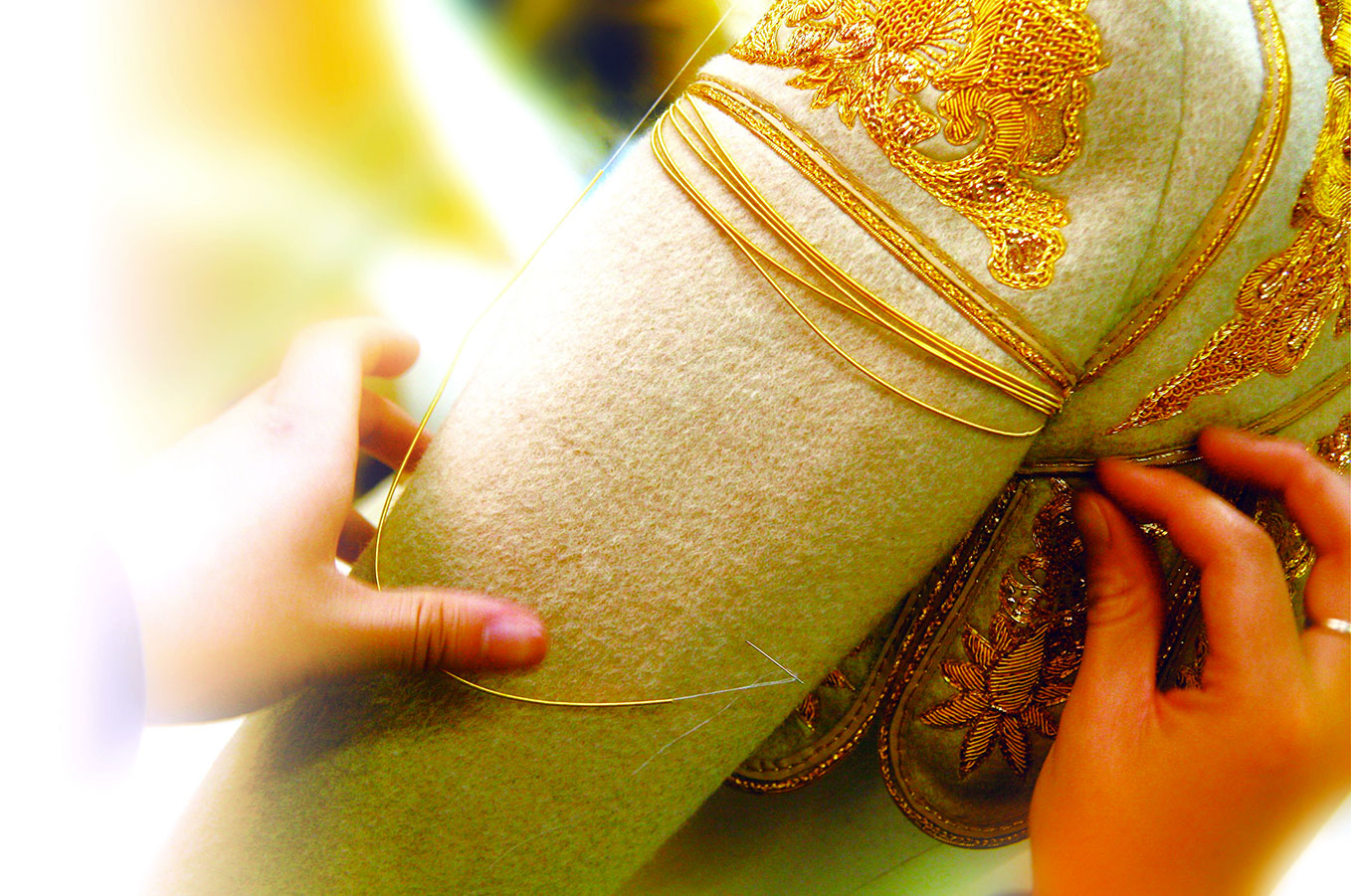