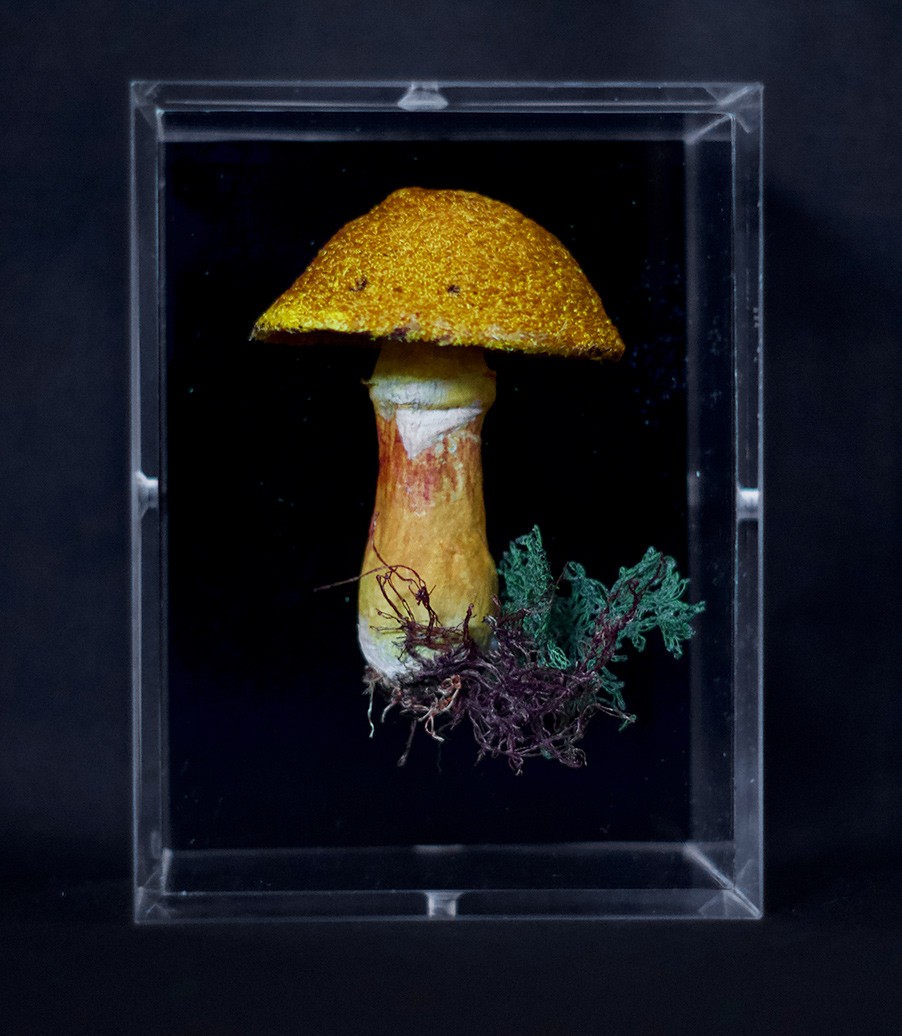 There are high profile artists who we think we will never be able to meet. Well I was wrong! Amanda Cobbett may be well known, but she is always open for a new meeting, a “conversation” as she likes to call it. 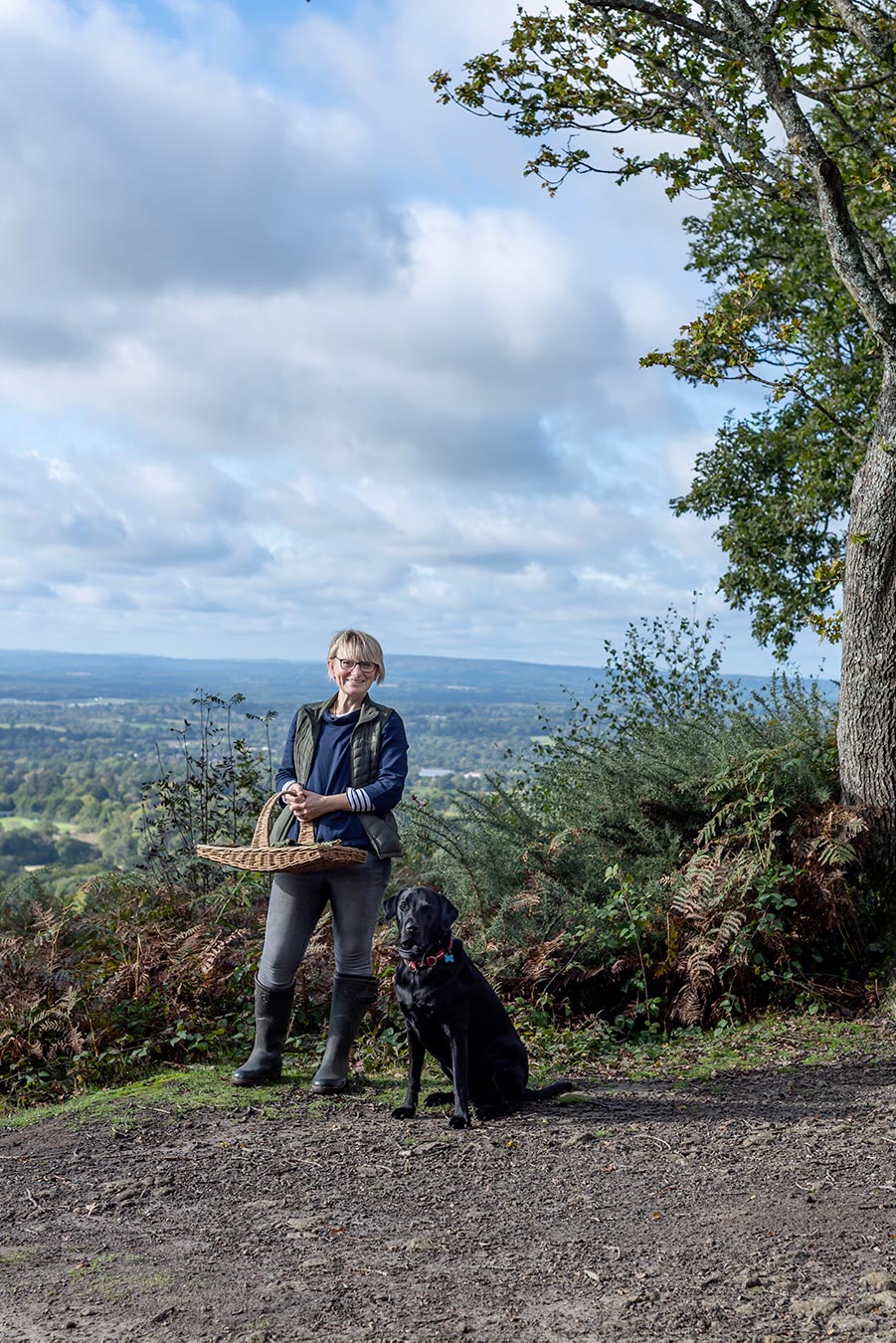 For almost two hours we talked about forests, soils, mushrooms, The Alps, about a book by Elisabeth Gilbert (The signature of all Things) and New Zealand. Amanda is an artist and a fascinating woman who wants us to see those tiny details of life that we don’t usually see in our busy lives.
Interview: Claire de Pourtalès

To watch, a lovely film about Amanda

Amanda and her dog Frank, walking in the forests of Surrey © Julia Currie

In Amanda’s life, luck has an interesting place. Born into a family turned towards “construction” (an engineer grandfather capable of building a television for his grandchildren, an illustrator father, a mother and a grandmother both seamstresses), she very early on wished to create in three dimensions. As a kid, she could see, outside her window, a very old oak tree glaring at her every morning. There she found her raw materials: acorns, twigs, leaves with which she built small worlds.

After her studies at Chelsea College of Art in London, she worked in the world of printed textiles – a universe that did not fully satisfy her, not being able to control the entire production chain. But chance kept watch. With her family, she moved to the countryside, discovering the fantastic English forests teeming with life. Her mother-in-law gave her a sewing machine and then came the revelation: Amanda, who does not know how to embroider, was going to use her new tools to create. The very fact of never having taken an embroidery course gave her the freedom to invent her own techniques.

During many years, she tried both patterns (like birds) and tools (the discovery of a small soldering iron will change her life). Little by little she found her gestures, her patterns (mushrooms, mosses, lichens, bark…). She loves the sea, especially the cliffs of Cornwall and the countryside, but it is in the forest that she will find her inspiration.
She aims for hyperrealism to let us see those magnificent details that light up her daily walks. Each piece is unique and sometimes Amanda can’t remember what she did to achieve a certain effect. She loves the path of creation and despite a large flow of orders, she does not want to be helped, nor to teach her art. She wishes to offer her customers unique, exclusive pieces, out of respect and also to meet this need to create each piece from A to Z. A seasoned entrepreneur, she also knows that she can justify her prices as long as the demand is there. She has thus succeeded in creating a win-win situation where the sale of her works allows her to devote herself to her passion, to take longer walks, to take her time for each creation, even to travel to discover other treasures.

When traveling, does she bring back specimens to study? Usually no. It is important to respect the fragile biological balance of each place. An alien species could endanger local species.
What is essential for her is sharing the emotions she feels when looking at each of these tiny natural wonders. And this is where the invention of her plexiglass boxes (Perspex) comes in, in which she attaches a small rod that allows her to hang her work. Thus protected, each creation can be seen from all angles. The details are endless – she hopes in this way to provide an emotion of joyful discovery for years to the happy owners of her pieces. Ideally she would like to use glass, but the costs are prohibitive at the moment.
Where did she get this idea from? She likes organized exhibitions, which allow comparisons. Showing her work in this way also makes reference to the past, to the thousands of insects stung with entomological needles presented to our curiosity.

In Amanda’s projects we find the desire to create a book (a Pop-Up of course!) Or a catalog. She is a little reluctant to the latter idea, which does not match her taste for a three-dimensional object. But she begins to see the need for it. She does not keep any piece at home, and cannot organize an exhibition. For the Chelsea Floral Show of 2019, she had to work day and night for months to create enough new works… all of which were sold in turn! So she is thinking about what kind of book she could create. An ancestor of her husband wrote the Rural Rides which are observations made at the beginning of the 19th century on peasant society. These comments are essential now that this world is gone. Amanda would like to start this “conversation” through the generations. Who knows which world will be that of 2100? 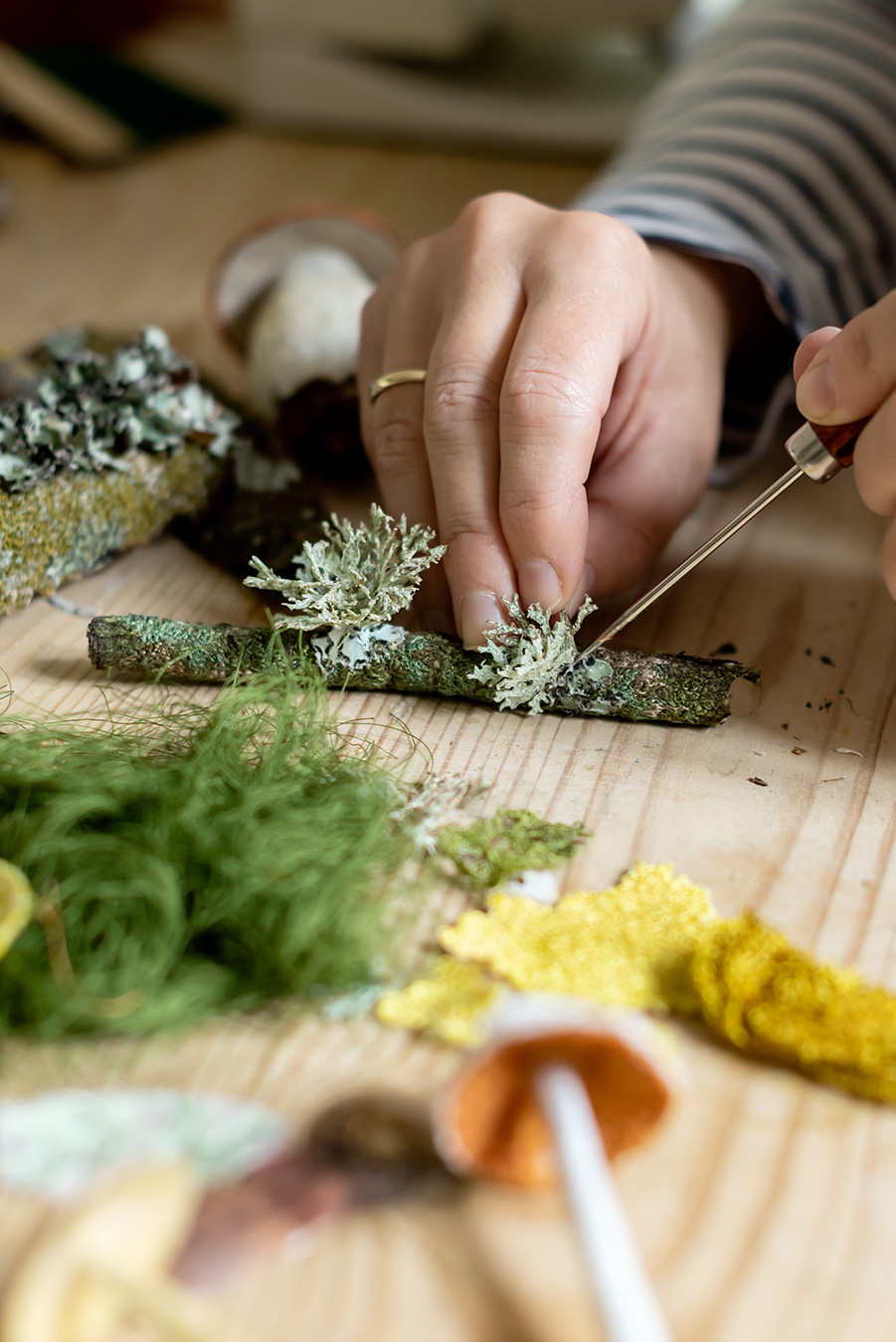 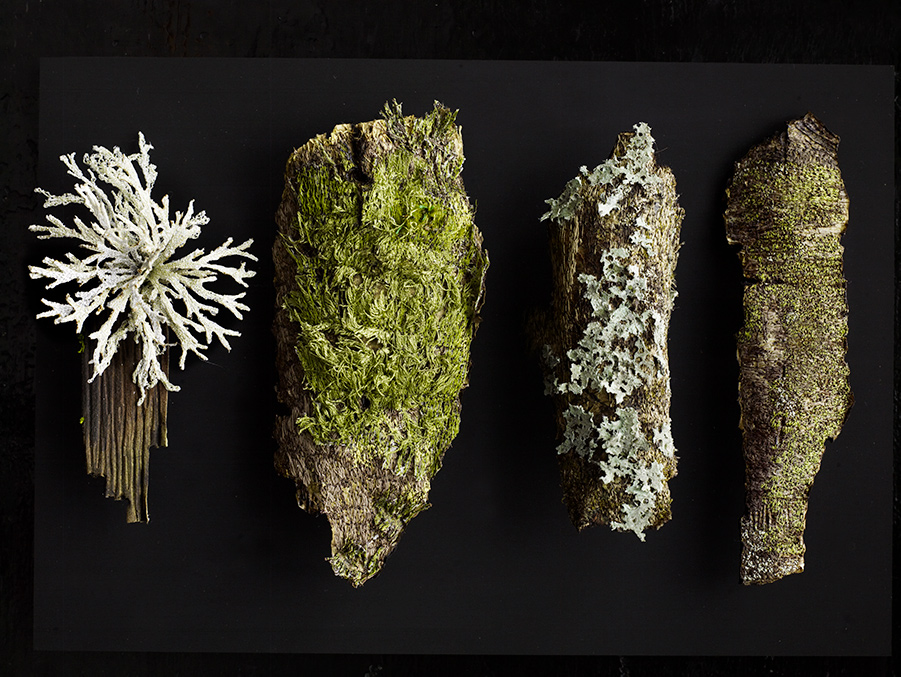 Moss, bark, lichen – all is stitched! © A. Montgomery

Today Amanda is literally bending over the forest ground. In a few square centimeters of earth hides thousands of kilometers of mycelium, this microscopic filament which has a major role in the life of our soils. After seeing Louie Schwartzberg’s documentary film Fantastic Fungi (2019), Amanda wants to recreate this organism but when we know the quantity of threads necessary to represent barely a few millimeters of soil, the project seems out of proportion as for its shear weight or the amount of work that it would require. Or maybe in a community context? Let’s hope !
She would also like to be a small cog between the scientists (like those at Kew Gardens) who discover the incredible potentials of mushrooms, and the general public, even entrepreneurs. As an artist she expresses herself with a different language, perhaps more accessible to non-scientists.

But for now Amanda is delighted at a bark eaten by a fungus (Chrolorciboria). This infection produced a very unique blue colour, extremely rare in the forest, the equivalent of having discovered a gold nugget. So the adventure continues! 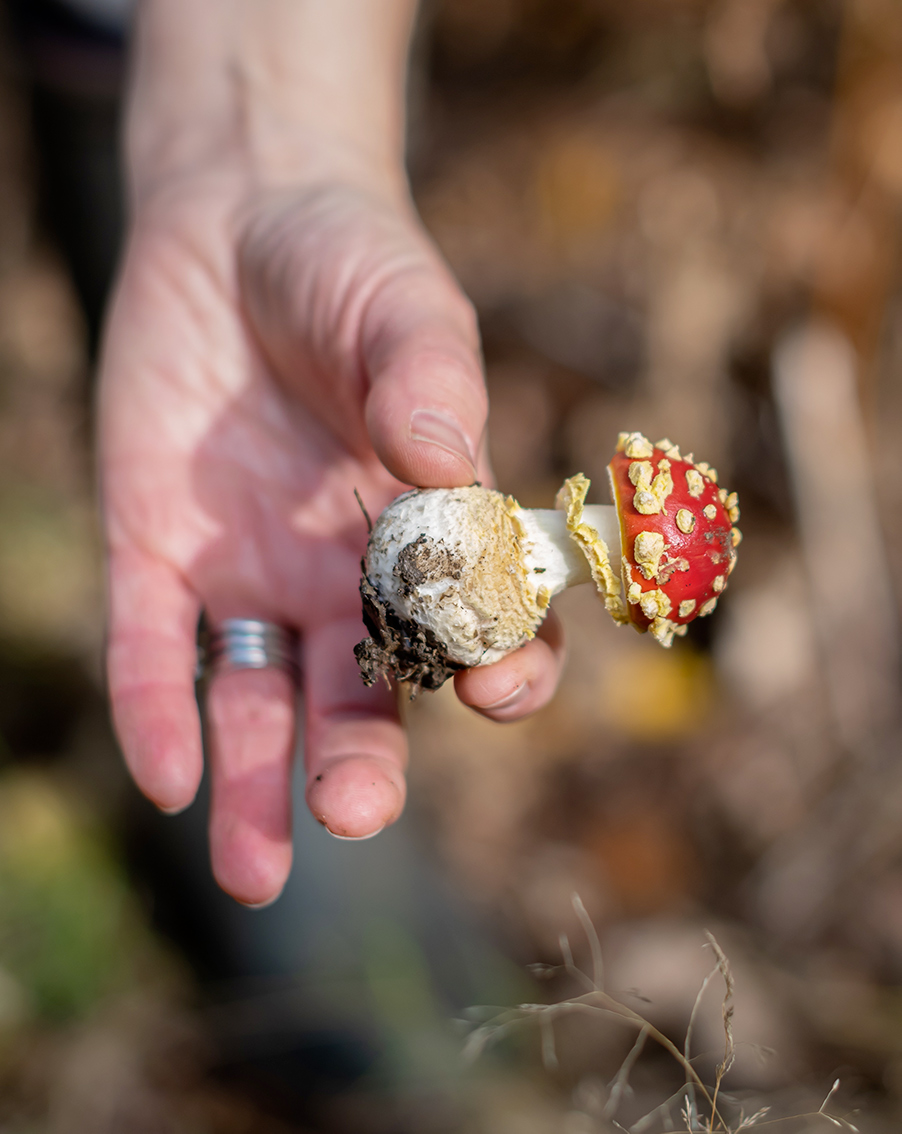 In the woods © Julia Currie