Research and text by Bénédicte Meffre

Medieval counted stitches embroidery from the German area makes up a very varied ensemble. From the 12th century to the 15th century, all those techniques used counted stitches, where each stitch is made in the same way, counting the fabric threads. Beside this characteristic, the whole corpus is quite heterogenous. For years, works made in this geographical area have been named as “German brick stitch” or “Opus teutonicum”. Both names are problematic. First, the brick stitch is only one stitch used and does not reflect on all the variety of stitches used during this time at this place. Opus teutonicum has a very clear historical definition that is too narrow to include all the variety of techniques.

In this paper, I would like to take you on a tour of some different works to describe their special features and try to name them accordingly.

Adoration of the Magi, altar cloth, second half of the 14th century © MET New York (29.87)
The names of the stitchers are written on the cloth: Sophia, Hadewigis et Lucardis [1]

With this work I will talk about the notion of style in embroidery.
When you work in medieval reconstitution, it is important to understand the notion of style of embroidery, to create the closest version possible, while working with technical and pattern limits.
Thanks to better descriptions and clear definitions, I hope we can all understand these techniques better, link them together and make enlightened choices when it comes to historical reconstitution.

The Opus teutonicum
The best-known definition is probably Kay Staniland’s one. He writes at the end of his book “Embroiderers”: “(…) refers to embroidery made on white fabric with linen threads” [2].
Staniland adds that some coloured silk threads could be added. “Gold is little used, sometimes not at all, which characterize the German embroidery of the 12th century; but the addition of coloured silk threads makes up for this absence”. We will see how we can understand this definition, and which pieces can be linked to it.

Adoration of the Magi, altar cloth, second half of the 14th century © MET New York (29.87)
Here we have accentuated the contrast, so the embroidery is more visible.

The Opus Teutonicum: a linen embroidery
In the Middle-Ages, linen embroidery was known to be typically German. We find different names such as opus teutonicum, opus alemanicum or ad modum allamanicum in various inventories from these times. It seems that the nature of the material used (linen) is what makes this group stand out from others such as Opus Anglicanum where threads of silk and gold were used.
The use of linen is often interpreted as an answer to economical limits. As most of those works come from a poor region (Lower Saxony), it makes sense that local materials were preferred to imported ones like silk (the culture of the silkworms only began in Italy at the end of the 12th century, and not before the 13th in the South of France).
Using such a simple thread might also come from monastic imperative: it can be viewed as a sign of piety and humility. Monastic orders constantly reminded their congregations that luxury was forbidden. In a German women convent, the Rules stipulated that only linen could be used, even for ornamentation.
A few of these works, like the altar cloth above, have the names or even the faces of the nuns who stitched them.

The Opus teutonicum – a monochromatic technique with hints of colours
During the 19th century, most academics used the term Opus teutonicum in reference to white embroideries stitched on and with linen. This hints that colours were completely absent, like modern embroidery techniques such as Richelieu or Hardanger where only white threads are used. It is true that most of these German works came to us completely white. It was thought that this usage referred to a symbolic aspect of the Ideal Poverty favored by monastic orders, especially Cistercians whose habits were white.
But recent researches made by Stefanie Seeberg [3] have come to prove this theory wrong or at least not completely right. When studying descriptions of these embroideries made during the 17th century, with thorough observations and analysis with UV light, she was able to create a new vision of what these works used to look like in the Middle-Ages. We can actually see hints of colours here and there from the threads used on a white fabric. Contour lines and some details were stitched using coloured threads of silk, wool or linen. The colours of dyed linen do not stand the passing of time and will fade to white. Hence our vision of white embroideries. It seems that the style of many of these embroideries matches the descriptions written by Kay Staniland.

Let us have a look at the stag and the snake (below). The body of the stag is stitched in white; its contour is blue and the antlers, brown. The snake is stitched with blue threads. The white embroidery is made with counted stitches: the legs and head in brick stitch, the body with satin stitch which allows the background to be seen, creating a geometrical texture. The antlers and the snake are both stitched with tapestry shading stitch. The borders are stitched with stem stitches.

We see the same pattern of stitches on the second detail, of a man (probably Samson) riding a lion. Note that the feet of the man are not stitched, but just sketched. It seems that we should imagine all the “white German works” with the same details stitched with colours. 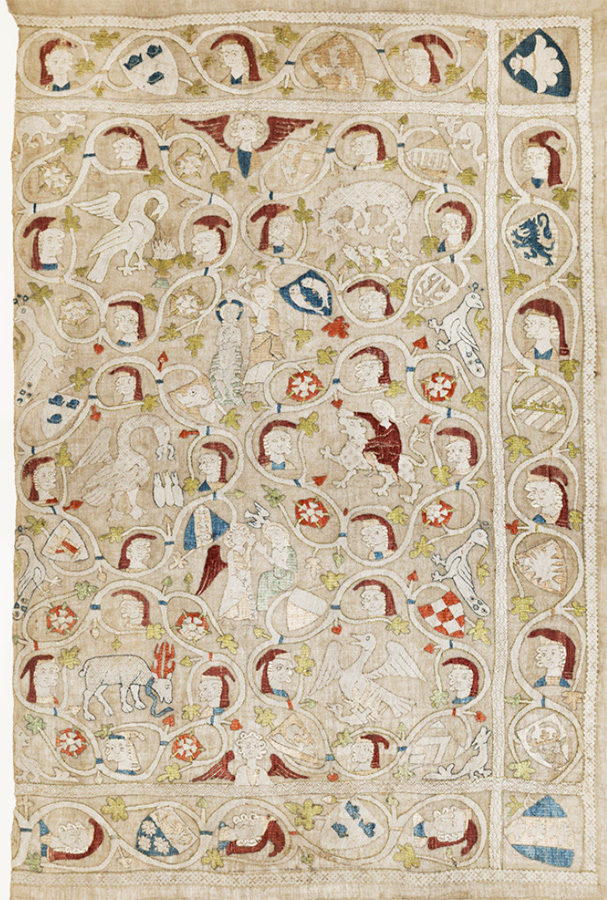 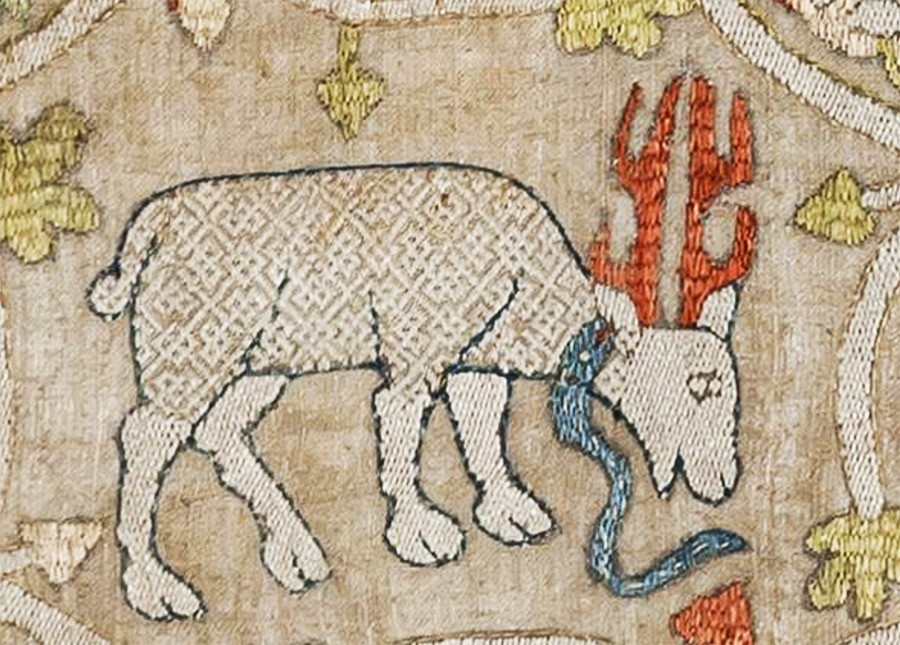 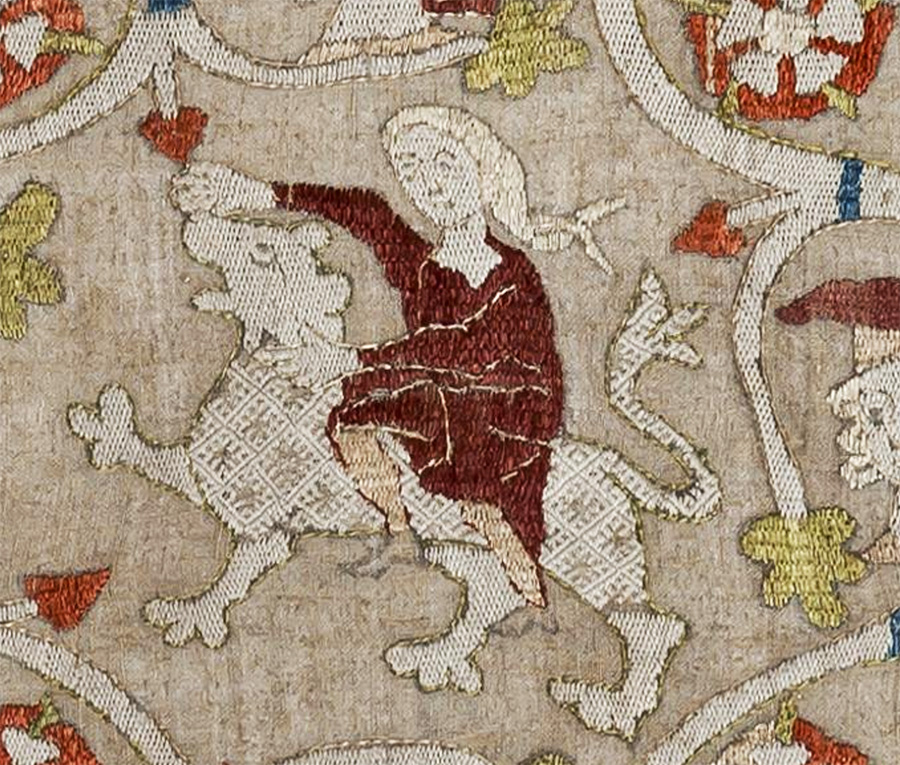 The Opus teutonicum – a textured embroidery
Another characteristic of these mostly-white embroideries is the contrast of perception, depending on where you stand. From a distance, the coloured details would have helped to quickly read the scene represented. But, from up close, the variety of textures and stitches offers a more subtle reading. We can easily count dozens of different patterns per piece. When looking attentively to them, we are surprised to recognize the same type of “texture” used in the paintings of the Middle-Ages, just as the details on the alter cloth we saw previously.

In this picture (below) we can appreciate all the different textures created by monochrome embroidery. The floral background is quite uniform, while the different parts of the figures are stitched using a wide variety of textures. The crowns and halos have an even more accentuated texture than the faces or hand, which are more subtle, details that we can see on the paintings, especially the ones using gold.
This is the reason why we cannot use the term “German brick stitch” for all the medieval German embroideries. This name focuses only on one stitch, forgetting all the other stitches that actually make these types of work so unique. There is a corpus of works stitched only with German brick stitch in coloured silk threads, but it really is inappropriate to use this name for all the counted stitch techniques of this time.

Below, details of the alter cloth with different contrasts which help see the fine stitched work.

Antependium
This tapestry seems white seen from afar, but on a closer observation, we can see traces of yellow and red. The embroidery leaves a lot of the white linen background to be seen. Inside an architectural setting, we can see religious scenes, animals and fantastic beasts. The whole design is surrounded by other animal scenes and floral patterns.
Despite the almost monochromatic aspect, thanks to the different types of textures, the figures are easily recognizable from the background or the setting. 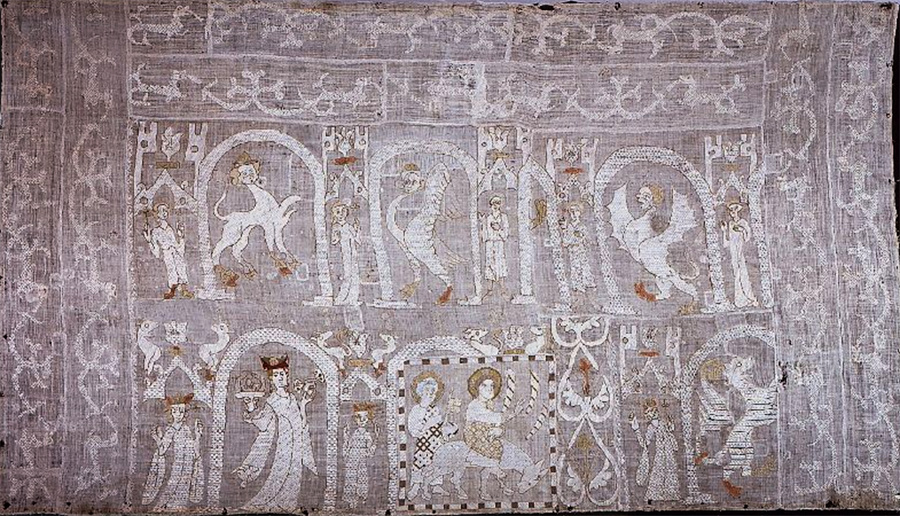 Let us have a closer look to this figure, stitched in white with hints of brown. Only the headgear is yellow. The whole body is made with straight stitches that create a geometrical pattern resembling a diamond shape. The face is stitched with brick stitch, and the headgear with drawn threads (where the stitches are so tightly made that they pull the threads of the fabric, creating small holes). The setting is made of white satin stitches, with an elaborated geometrical pattern.

We see with this piece all the characteristics that we have noticed before, and that together create a unique style: mainly white embroideries where figures stand out from the background thanks to specific textures. Hints of colours help the reading of each piece and focus on important details such as the halos. A large variety of textures provides more details and a deeper understanding of the scene.
This is clearly a definition of an embroidery style: we can list the same techniques, characteristics and patterns in each of these works.

Conclusion
We now have a better understanding of what is Opus teutonicum: figurative patterns stitched on a white linen fabric that shows through. The embroidery is made with mostly white linen threads with some details stitched with coloured threads. The techniques essentially use counted stitches creating a large variety of textures for each part of the design.
The idea that German embroidery was mostly white during the Middle-Ages is now proven wrong. A large corpus was actually using colours.