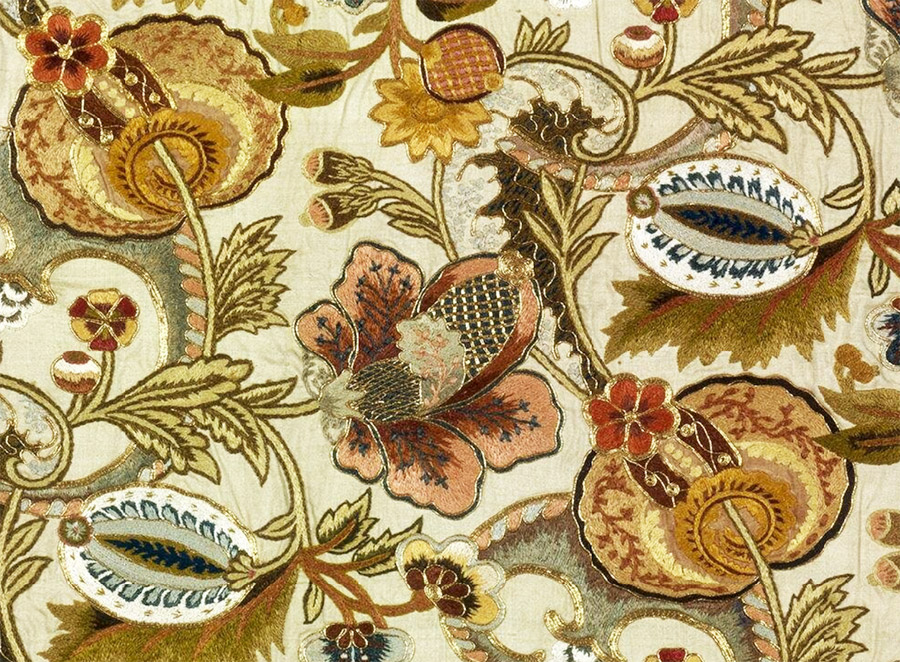 Thomas Wardle was born into a family of dyers in 1831, near Manchester (England). Driven by his creative passion, he became the great defender of English silk, traveling extensively, with an open mind to influences (especially Indian) and to the possibilities offered by this turn of the century.
The artist William Morris seeking to rediscover medieval know-how to fight against the mechanization of labor, contacts Thomas Wardle who was one of the last to use wooden blocks and not rolls to print his fabrics. Together they develop a range of natural dyes that can be used on tussor or tassar silks (skeins and fabrics), which Wardle imports from India. 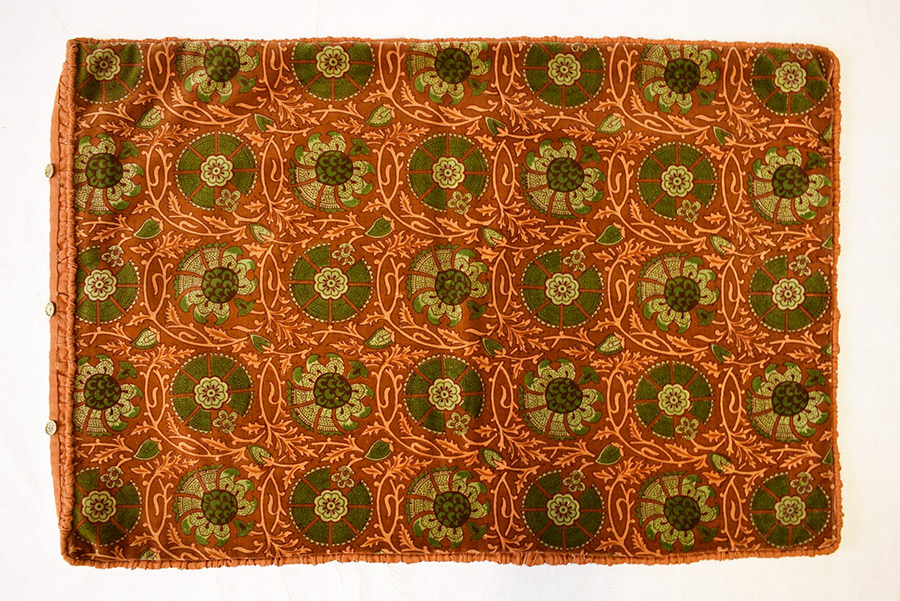 Rectangular cushion cover of block printed cotton velvet. The design shows an Indian pattern of roundels of two palmette type stylized plants, alternately repeated vertically and horizontally. Each motif is surrounded by a curving leafy stem and there are flower buds at the intersections of the roundels. The pattern is printed in shades of green and orange with dark brown outlines on a mid-orange/brown ground.
The blocks for this textile were cut for a wider cloth than this as the pattern continues over both selvedges.
The distinctive browns and greens show it was made specifically for clients who preferred decoration in the so-called Aesthetic taste.

This example shows Wardle’s improved methods of block-printing and dyeing, many of which he had learned in India. He also used historic eastern patterns for his work, collected both from printed sources and items collected during his trips abroad. This pattern with its hot colouring of browns and rust reds is clearly influenced by Indian design.

Tussor silk is produced by a worm living in forests. Its fibers are shorter than those of traditional cultured silk. It has a natural matte golden shine and a more pronounced texture.
The basic tussore silk fabric is naturally beige. It was in 1877 that Thomas succeeded in figuring out how to use vegetable and mineral dyes that allowed silk to be dyed to any shade required.

Like many Arts and Crafts designs, this print of chrysanthemum buds and meandering leaves is inspired by the forms and colours of garden flowers. The chrysanthemum is also a motif much used in Japanese design and Wardle was very interested in Eastern patterns, travelling widely to collect ideas. 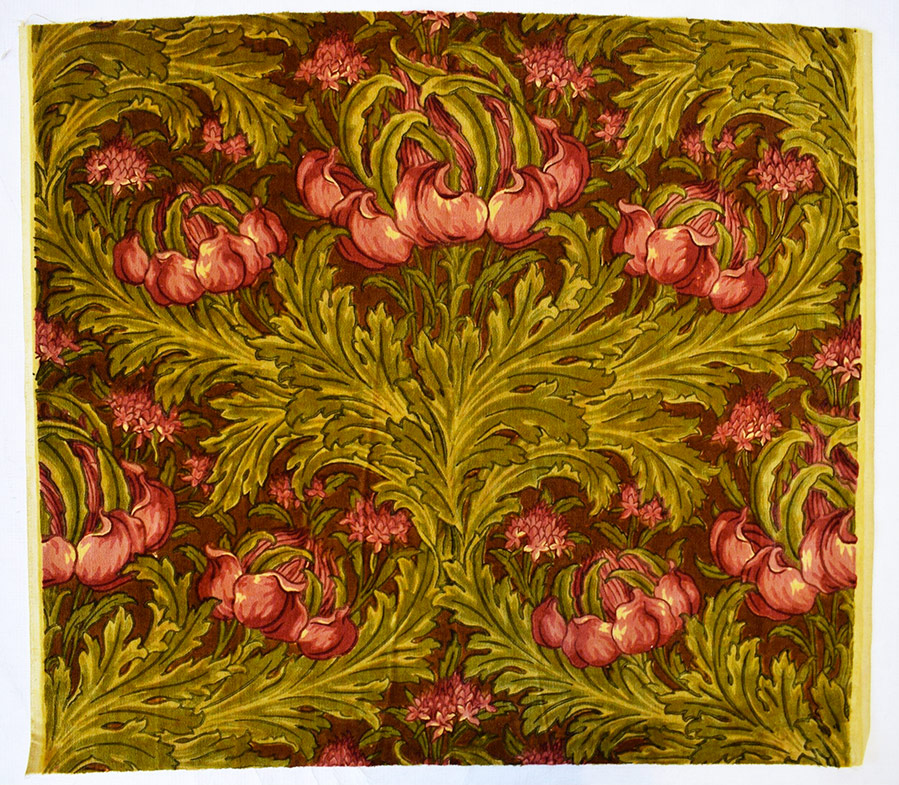 He gives his wife Elizabeth a few strands of tussor silk and asks her to design a new form of embroidery, hoping to encourage embroiderers to use his silks. The dyes produce almost unalterable tones, clear, soft and shiny, which contrast sharply with the harsh shades of aniline or chemically dyed wools used in Berlin embroidery. Elizabeth is already known for her skill in mixing colors and for her skills as an embroiderer.

In 1879, she set up an embroidery school. While promoting the products made by her husband, she offers women in financial difficulty a “dignified” means of earning a living. 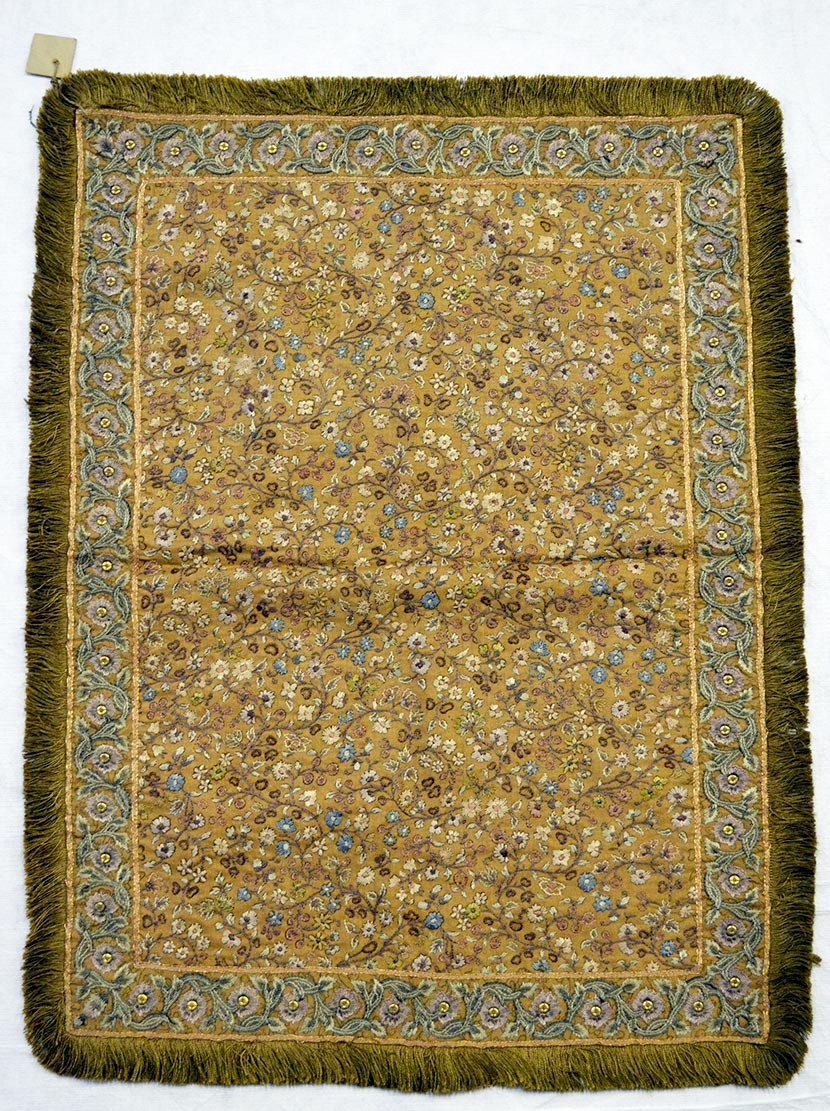 The flower heads have metal studs attached to the centres and are edged with lines of gold-wrapped thread. The back is unbleached tussar silk, printed with a floral design by Thomas Wardle in yellow ochre. Gold-coloured silk fringes. 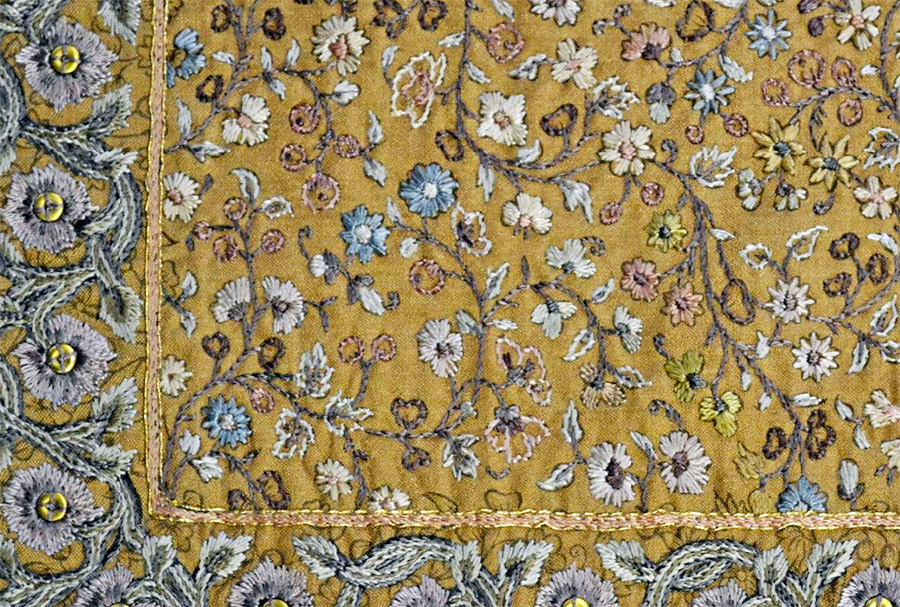 Elizabeth lays the foundation for a unique embroidery: the works use lightly milled tussar silk worked in different thicknesses, a small variety of stitches to produce varied textures and shading, and the couching of golden threads (and sometimes sequins) from China or Japan.

Skilled embroiderers with a good sense of design could create very original embroideries that were far from direct copies of the printed pattern.

The Company also organizes the sale of complete embroidery kits by mail, with an already embroidered corner serving as an example (this is found in Morris et Co too).

Embroidered panel with an Anglo-Indian design worked in silks on silk. The embroidery shows a branching design of leaves and palmettes worked in shades of green, cream, red and pink. There is a narrow border top and bottom of small, stylised flowers with a curving stem. These flowers are worked in buttonhole stitch whereas the rest of the embroidery is worked in split and long and short stitches in silk on a tussor silk ground. Japanese gold thread has been couched around sections of the design.

The embroidery is worked on a pre-printed silk ground. 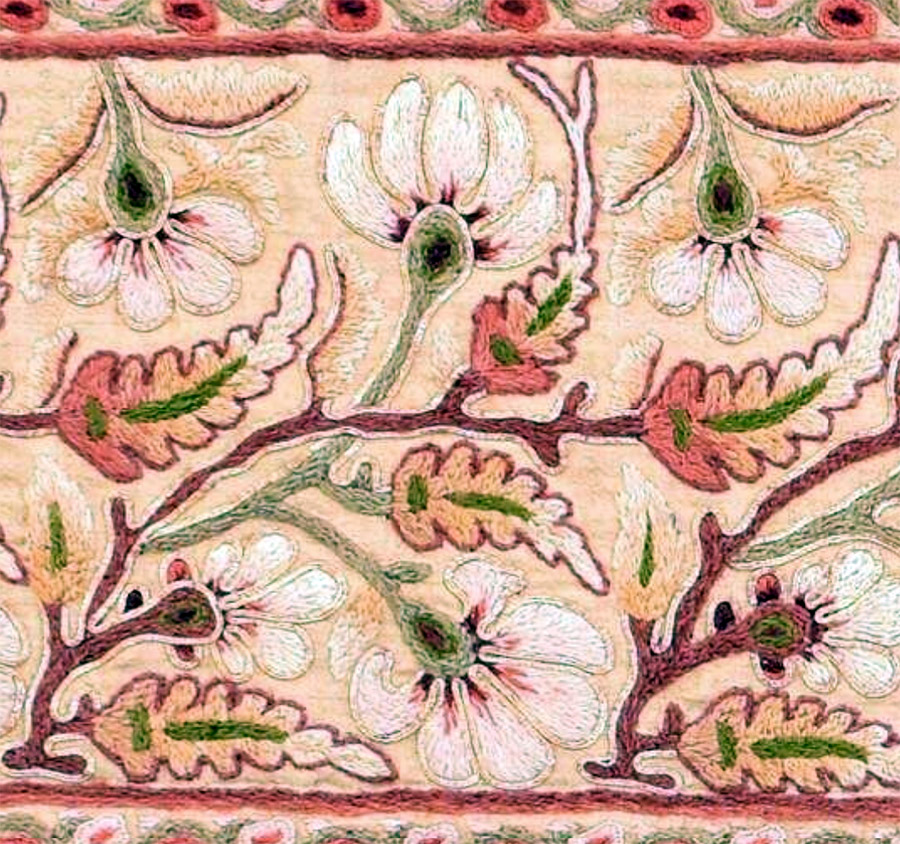 Designer artists of the day, such as William Morris, Walter Crane, and architects such as John D. Sedding, Norman Shaw, and George Gilbert Scott employed the Leek Embroidery Society to embroider liturgical vestments and altar tablecloths for the churches they were building, mainly as part of the Gothic Revival. You can still admire these pieces on site.

The Company quickly gained a reputation for its exquisite work which has been presented at international exhibitions and won many prestigious honors. 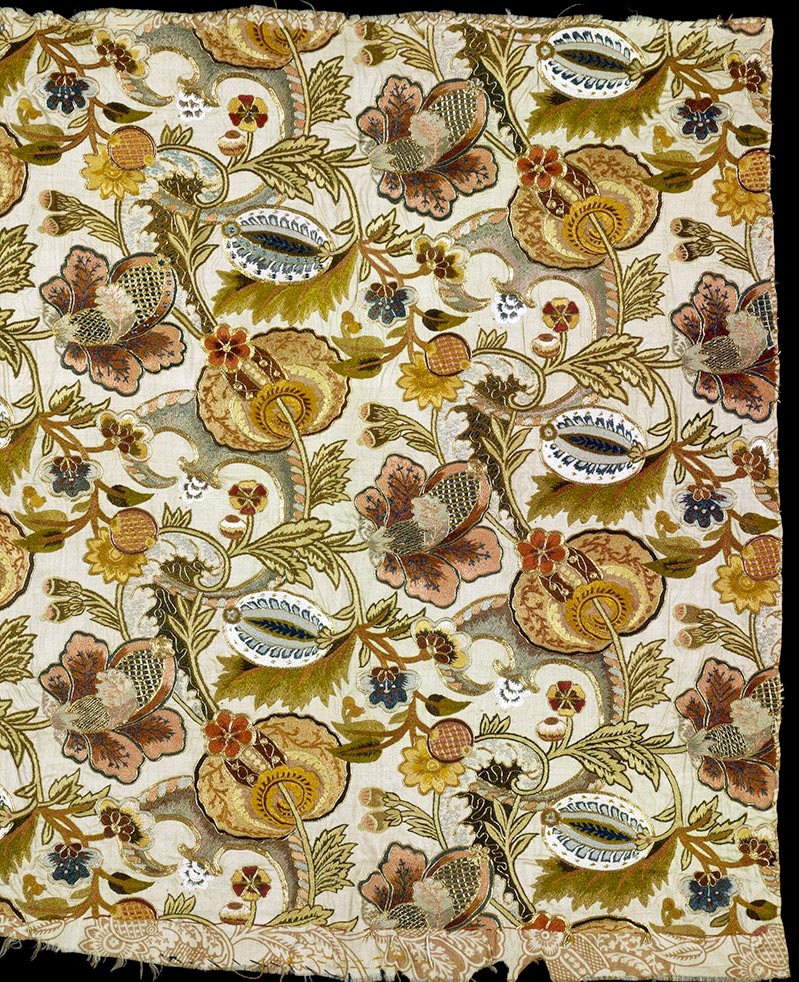 This example was said to have been embroidered in 1892 by Frances Mary Templeton from Helensburgh in Scotland whose brother-in-law owned the firm of Anderson & Robertson. This firm produced the silk used by Thomas Wardle.

This piece is worked in satin and stem stitches, with laid and couched thread. The pattern of this embroidery shows the influence of early 18th-century printed chintzes of the type made in South India on the Coromandel coast. It is also similar to embroideries worked in India during the second half of the 19th century for the western market. These became very popular in England and were sold through fashionable shops such as Liberty’s.

He first visited India in 1885 in order to make a collection of silk textiles and embroideries for the Silk Culture Court of the Colonial and Indian Exhibition. He then visited Bengal to report on silk manufacture there. He concluded that India could supply the greater part, if not all, of the raw material which England required, and his advice helped bring work and revenue to many in the area.

Embroidered mat, unbleached tussar silk, with silk and gold thread. The pattern is probably “Multan Mayblossm”, designed by Thomas Wardle. You can still see it on the back, without embroideries. 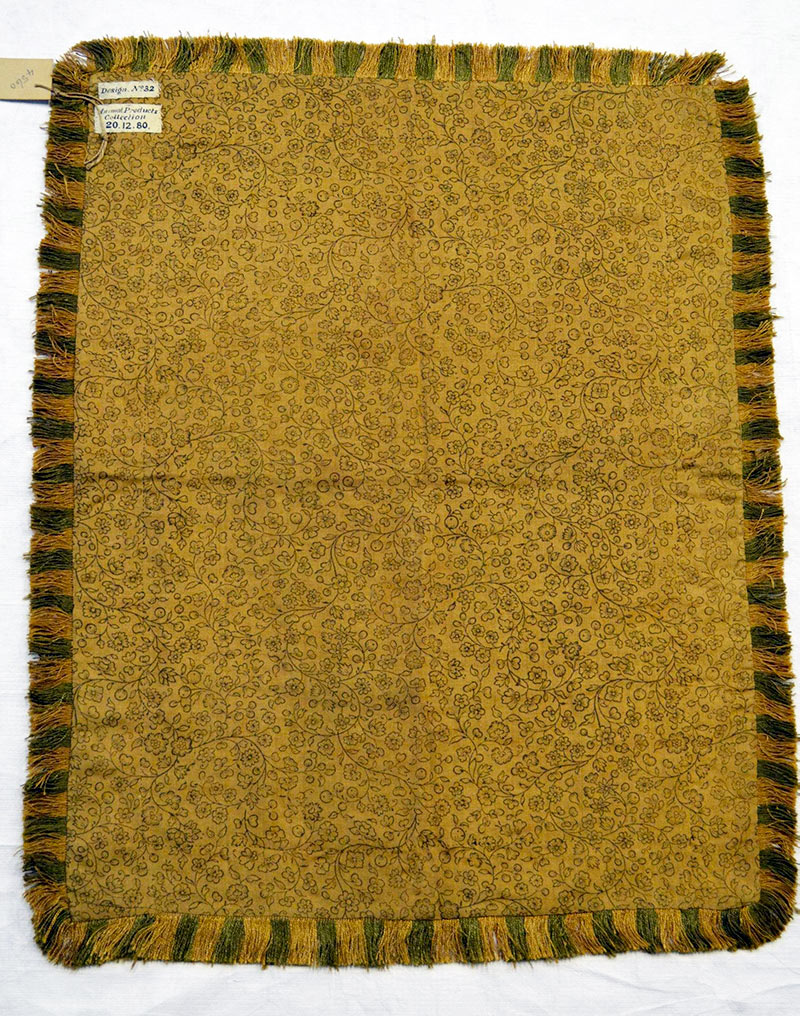 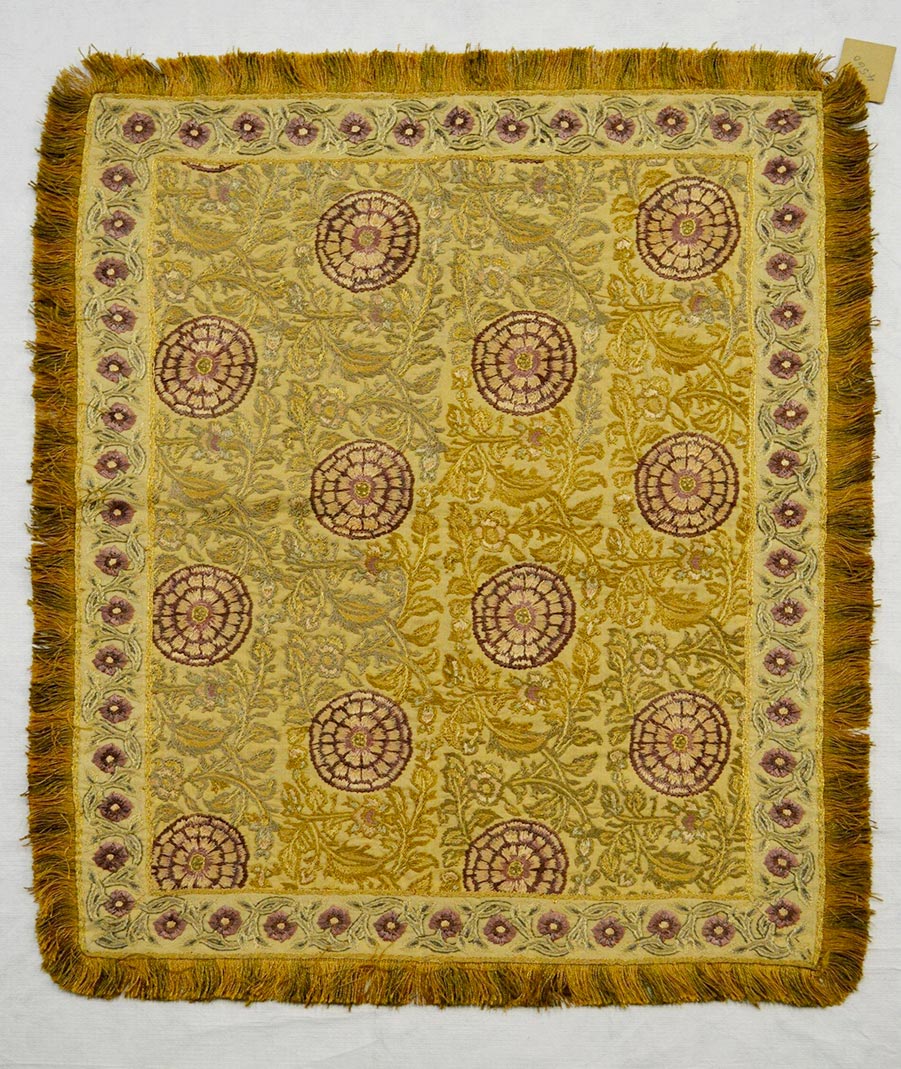 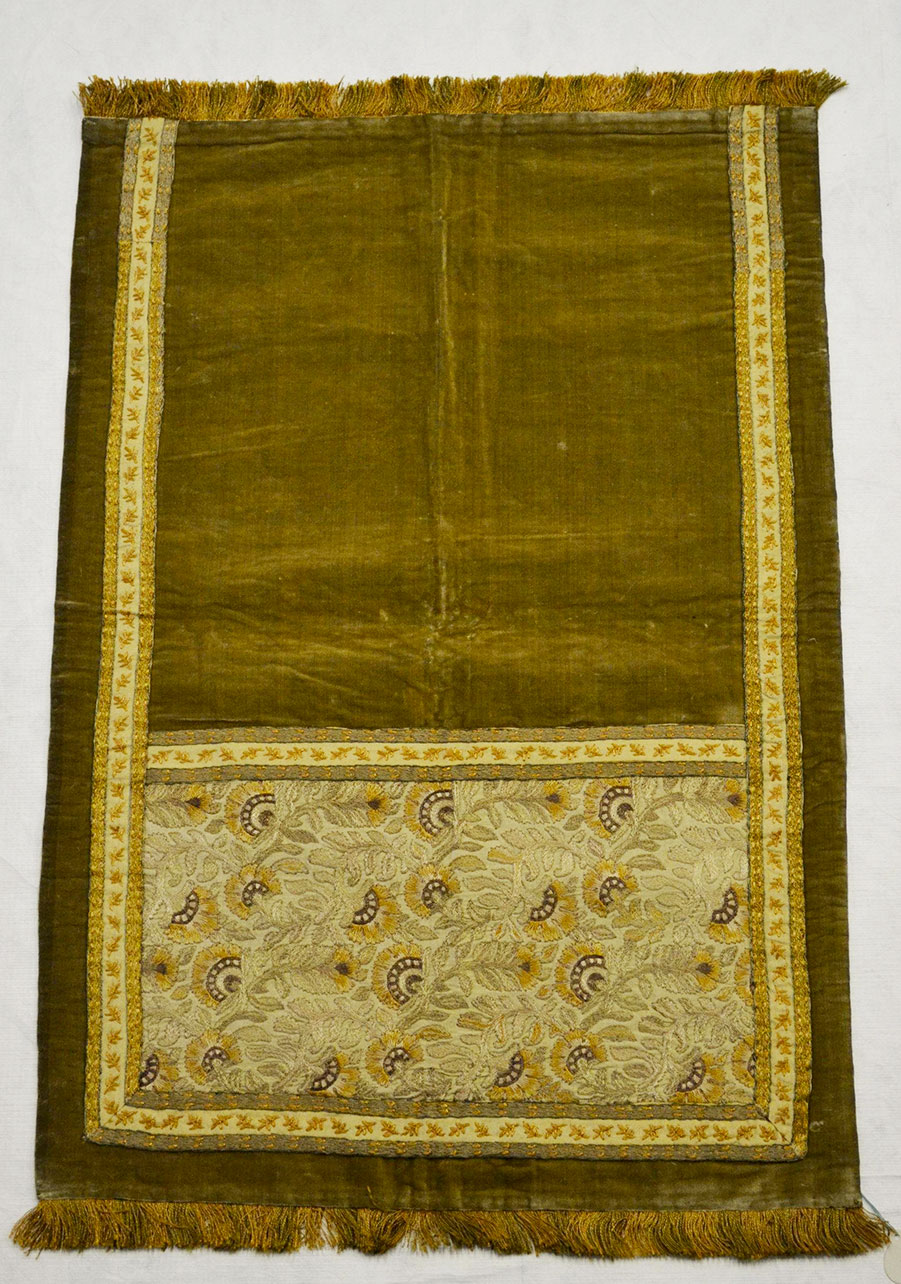