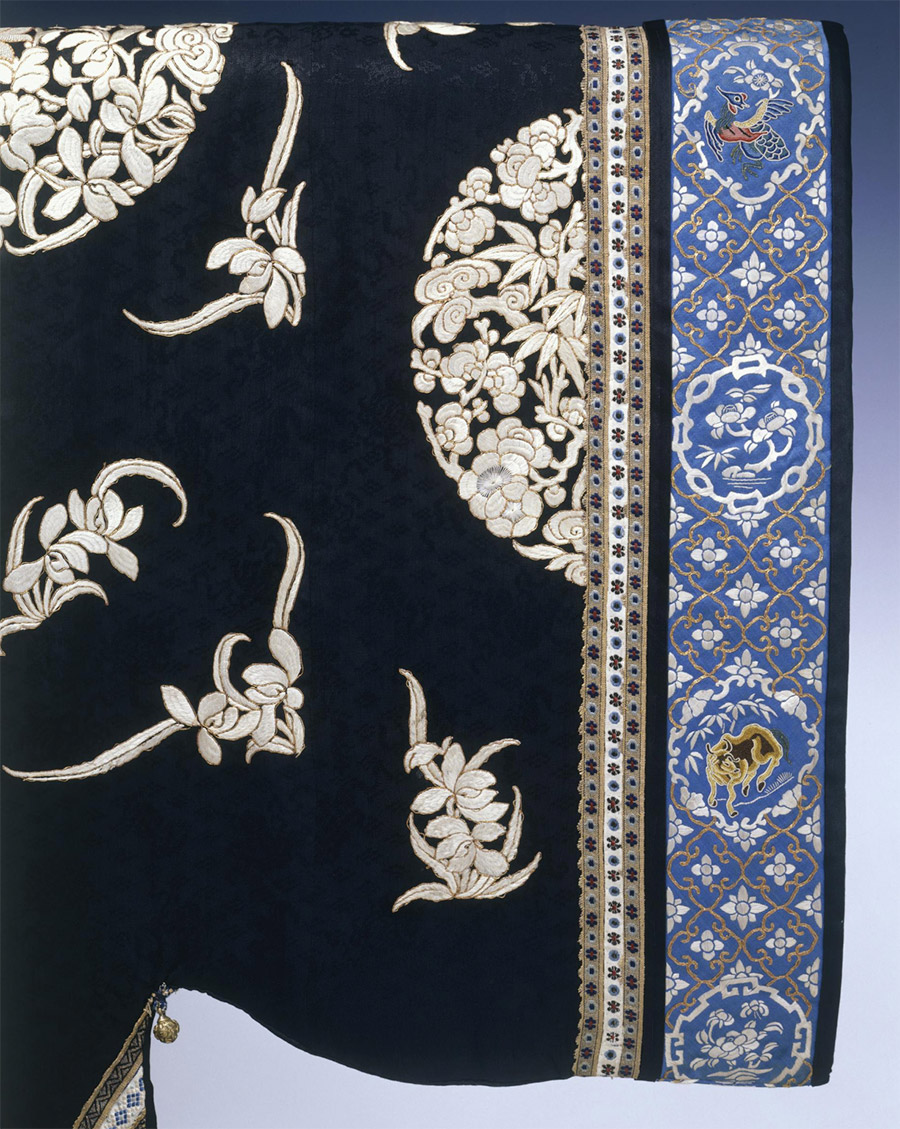 Embroidery has always been considered a major art in China, which has allowed its development both technically and creatively. It is used, like painting, calligraphy and sculpture, to express emotions, sensations, to transmit history or a story, to unite a people around its symbols (drawings, colors, shapes). It is therefore again in China that we set off to discover the fine embroidered bands that decorated the wide sleeves of women’s dresses. 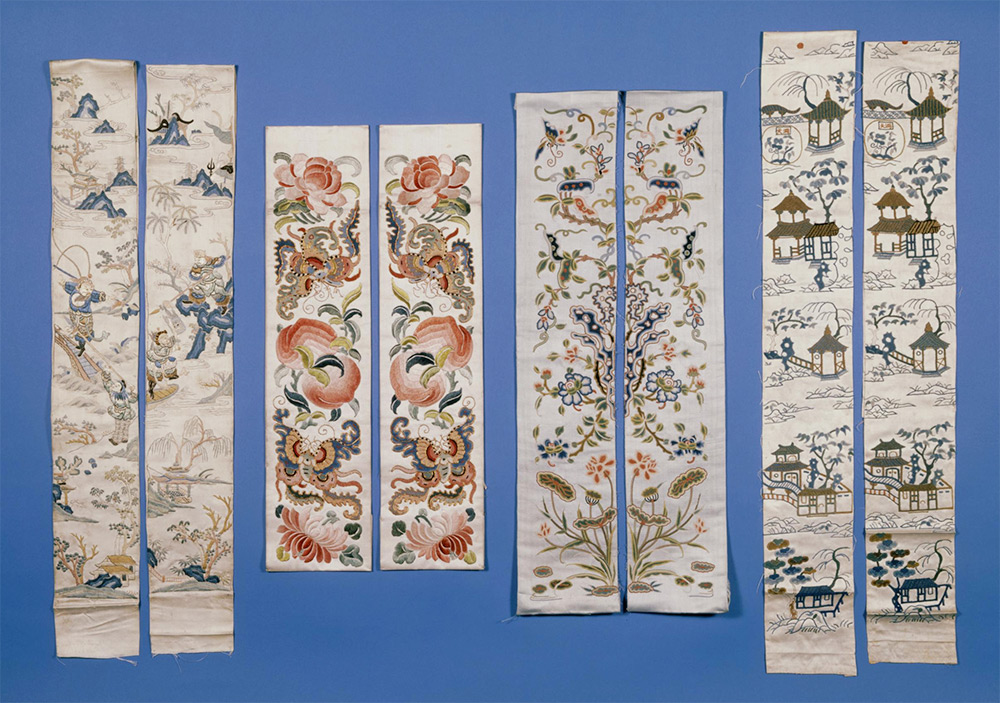 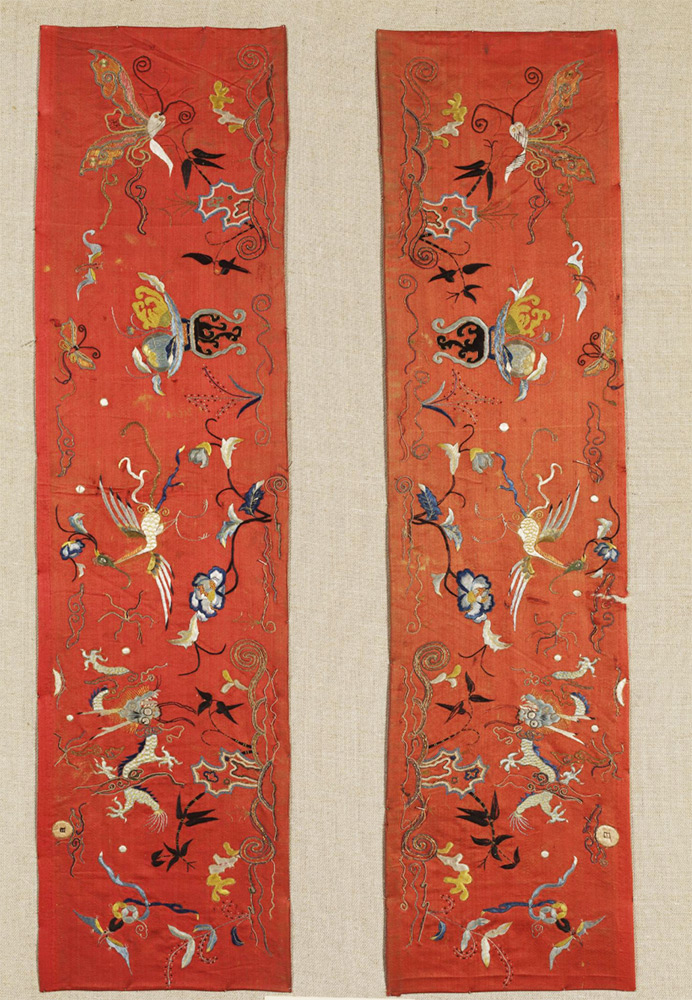 History
In 1644 the Manchus took power in China and founded the Qing dynasty. Their costume was a mixture of nomadic traditions and Hans woven silks. During the previous dynasty (Ming), women had started to embroider the edges of their sleeves, a tradition taken up by the Manchu. 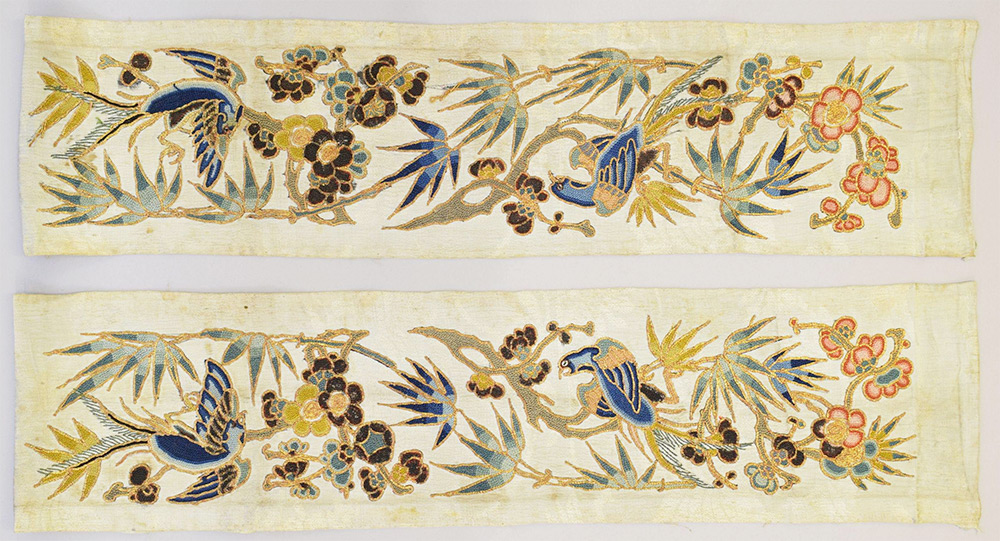 During the next 200 years, the women’s costume will go from an assemblage of fabrics superimposed quite loosely to dresses and skirts more and more structured and at the same time wider. They are often adorned with an elaborate embroidered decoration, which seeks harmony or dissonance. The development of professional embroidery workshops will allow the creation and deployment of increasingly rich and varied embroidery. We then see the arrival of guilds, professional pattern designers, intermediary agents, etc.
These professional embroiderers decorate official clothes, those for ceremonies and those for the theater, focusing on accessories such as collars or borders. 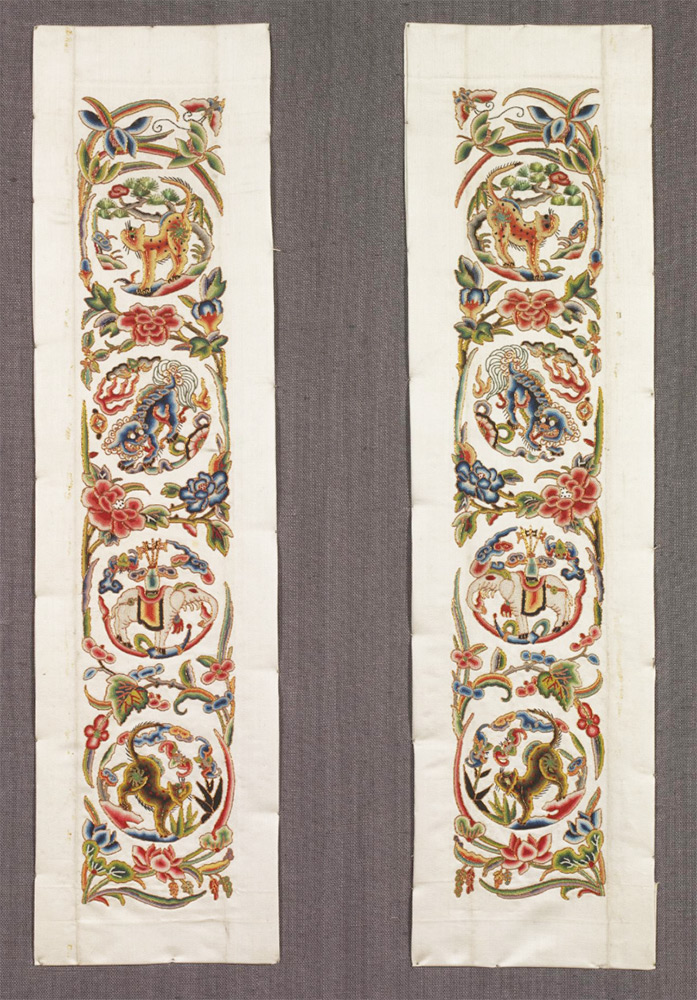 Description
The women’s dresses had very wide sleeves on which were sewn the embroidered bands. These consisted of two parts, one of which was embroidered and the other sewn to the sleeve. The bands were approximately 18 cm wide by 1 m long.

The visible part was often only embroidered on the back of the sleeve: women kept their hands in their sleeves, crossed over their stomachs, making the embroidered back visible.
In the fall and winter, the fabrics were satin or silk damask, lined with fur or cotton. In spring, the lining was silk, then in summer changed to a silk gauze or perforated silk that let air through. 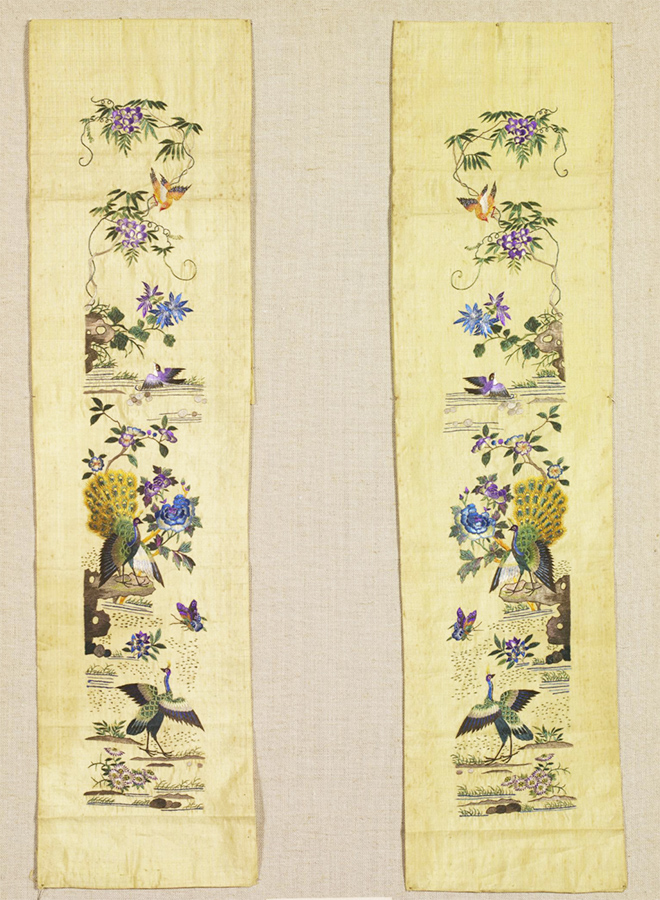 Often the embroidered band did not match the design, the colors or even the type of fabric of the dress: they were made to be sewn and unstitched as needed.

Drawings
For these decorations, the artists could draw on a vast symbolic vocabulary, used in other decorative arts. The designs came from the natural world, mythology and classical literature. 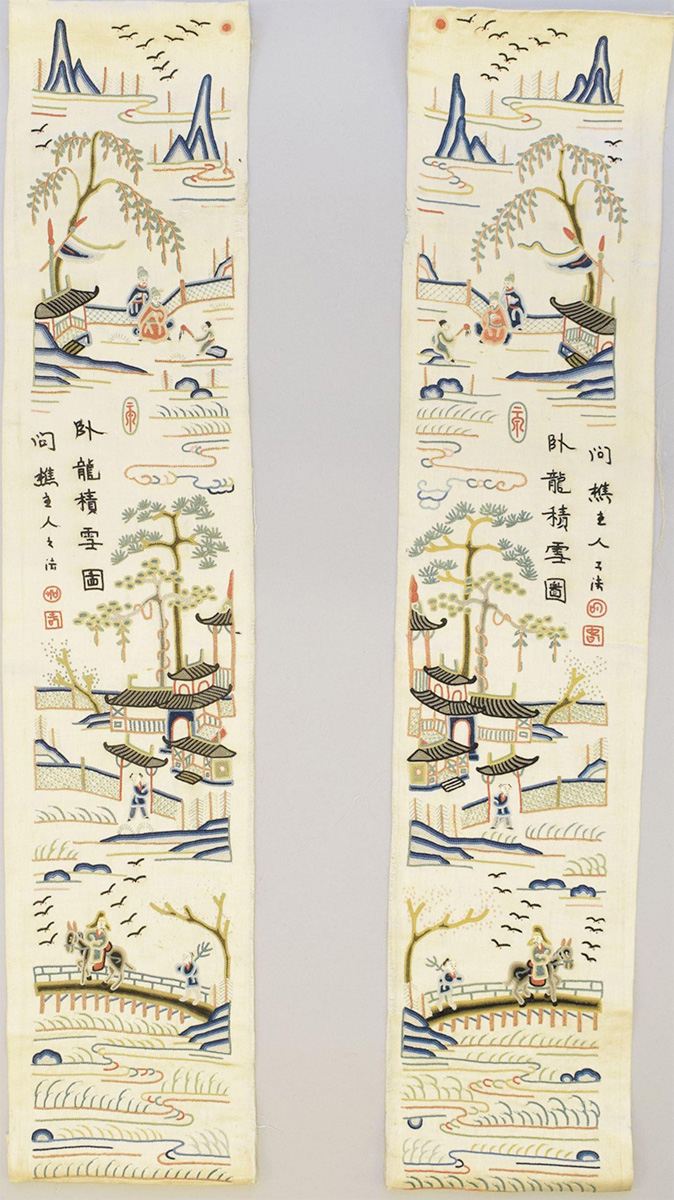 Informal dresses (which were not worn during ceremonies) allowed for more choices in design: often motifs linked to a long life, a large family, or a happy marriage. The Chinese easily recognized all these references, such as the peony evoking wealth and distinction or the lily, a symbol offered to young women at their wedding to wish them many sons.
One of the frequent literary references is that of the devotion of Lord Wei who waited for his beloved under a bridge (the Blue Bridge) and ended up drowned by the rising waters. The butterfly (longevity) drinking the nectar of peonies evokes the joys of love.

There are also architectural elements such as gardens, terraces, pavilions. Nature (landscapes, birds, insects, horses, fruits and a wide variety of flowers) is also an endless source of patterns.
Let us also not forget the importance of colors to the Chinese: yellow is for the emperor, red is the symbol of joy, often worn at weddings; white is reserved for funerals and mourning. 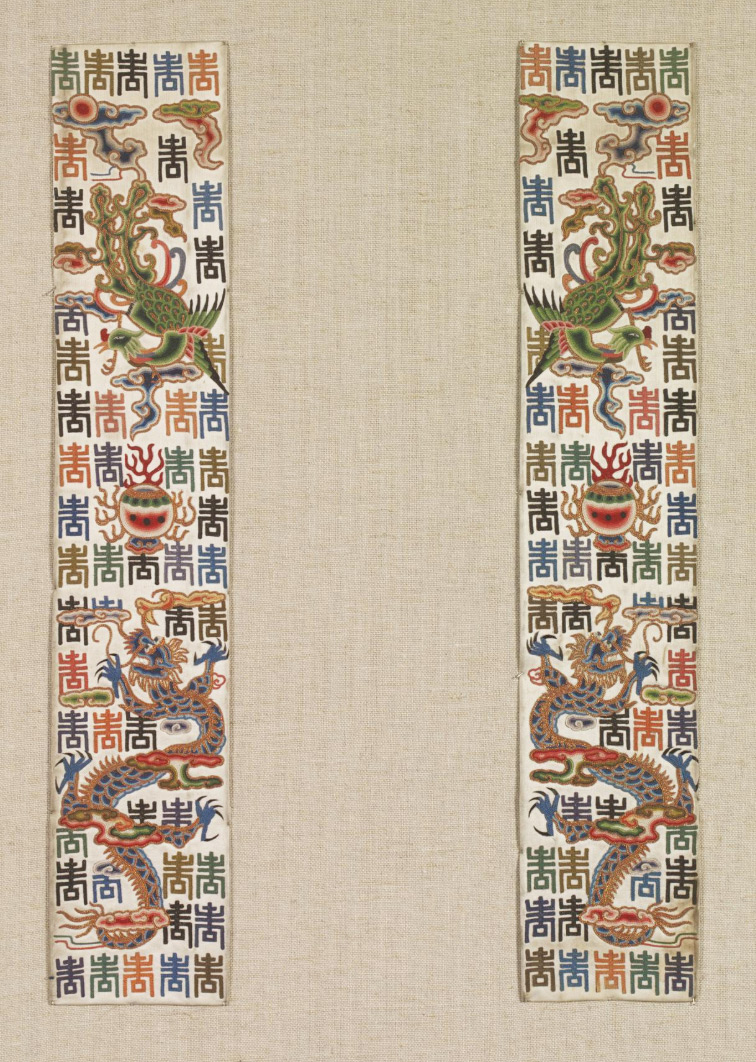 Techniques
The Kesi technique is the most sought after. It takes much longer than full weaving (when the weft thread runs through the entire fabric) or embroidery. Each color is woven in the necessary width, never more. The design is perfectly reversible. Bands embroidered with Kesi are very rare. Sometimes, to save time, very small details like the eyes of the figures are drawn in ink, a practice that spread in the 19th century.

The bands are embroidered in a wide variety of techniques. Some are done with one technique, others with a mix.

The satin stitch and the long-and-short stitch, the stem stitch or the Hollie stitch, the Beijing stitch and the technique of couching are the most used. The Beijing stitch (or knot) is sometimes called The Forbidden Stitch. But opinions differ on the origin of this name: for some it was invented in the Forbidden City, for others it would have been banned because it caused blindness among embroiderers. 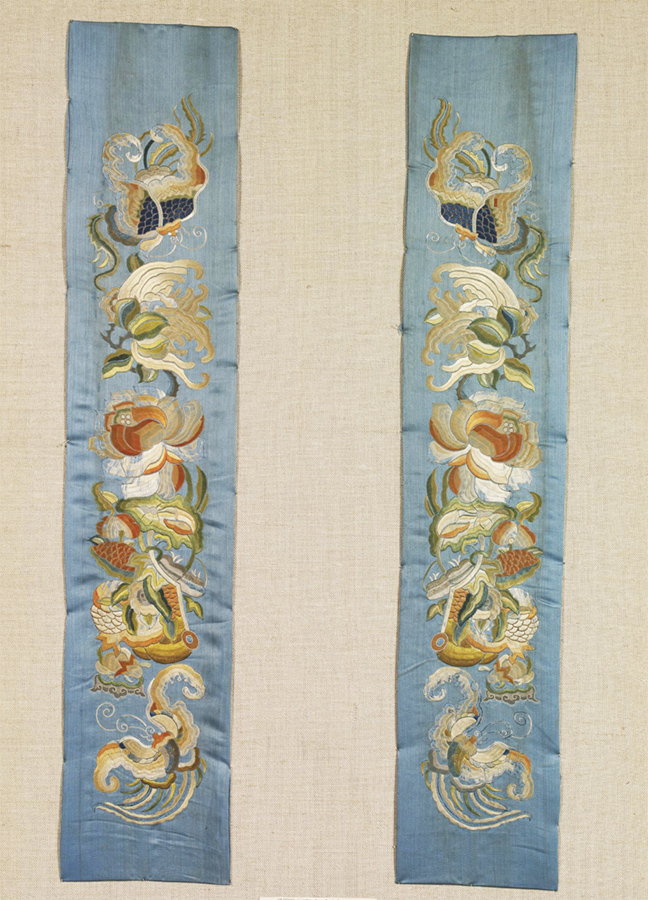 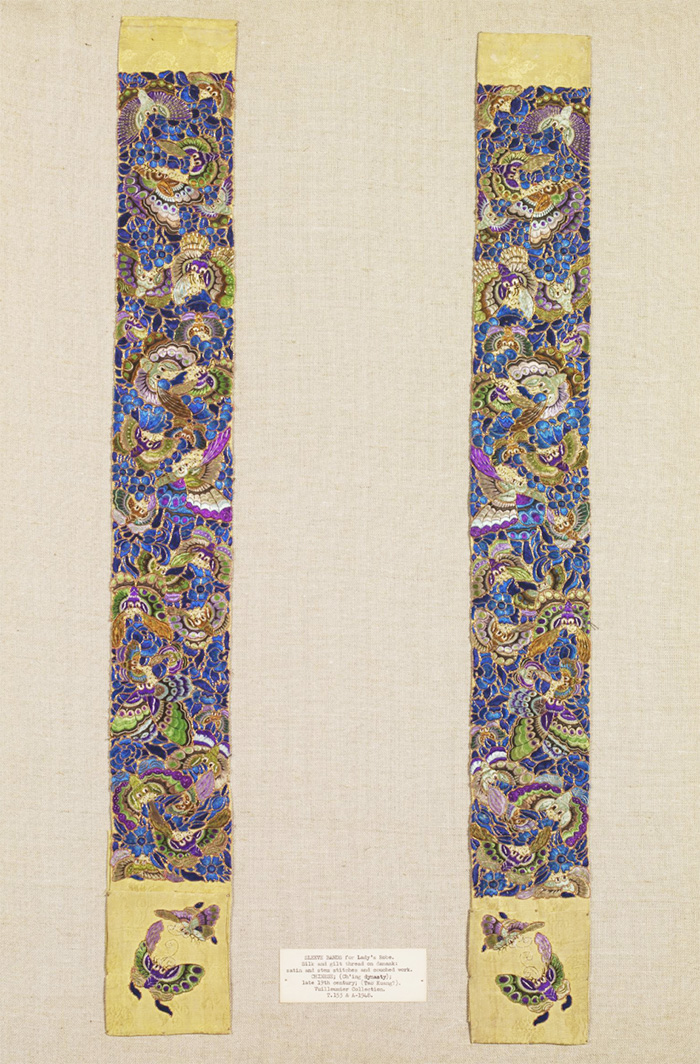 Embroiderers often cleverly combine their stitches with the ground fabric to create optical effects like animals half submerged in water, or flowers reflecting in a lake.
Another interesting technique is that of pieces of silk painted by hand and then glued with rice glue on paper. They are then cut and applied to the fabric to form the desired designs, creating an effect of depth.
In 1856, W. H. Perkins invented artificial colors for aniline dyeing. They did not arrive in China until after 1870, but were used to create magnificent shades, such as a brilliant purple or a wide variety of shades of blue.

Collection
There is a whole market for collectors. Westerners living in China in the 19th century often brought back these bands, cutting them off to keep only the embroidered part.
They tell stories, talk about the aspirations of these women, often with humor.
A framed collection can add a unique artistic touch to a wall.
Their prices vary a lot depending on their technique (the Kesi being the most expensive), their age, their subject or their condition. Fortunately, museums also keep some very beautiful specimens accessible to everyone.