In France there is a House with such a global reputation that it became an Institution. Being taught the art of Haute Couture embroidery in its walls guarantees you to learn the best techniques and will make you a very fine embroiderer.

All photos are copyright protected © Lesage 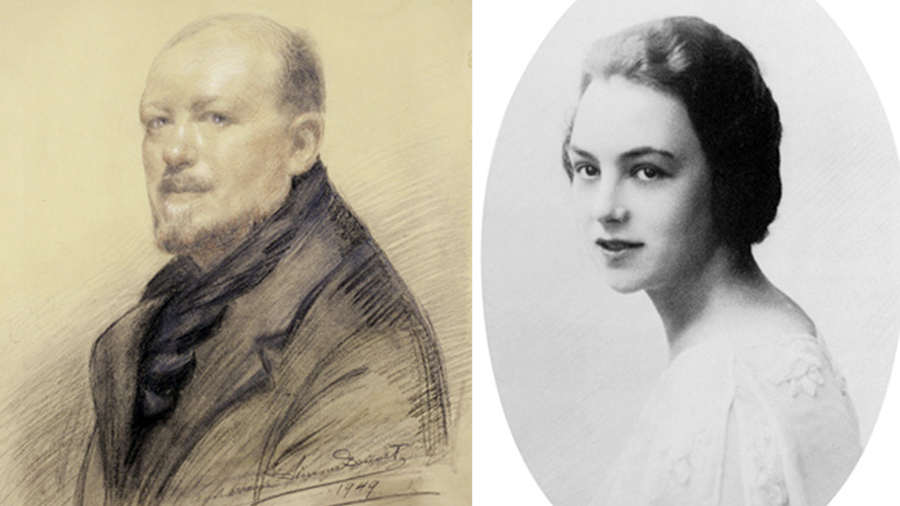 History
In 1858, Mr. Michonet opens his embroidery workshop and soon receives orders from Napoleon III’s court, from Parisian theaters and even from famous designers from the Haute Couture (Worth, Paquin, Madeleine Vionnet).
Albert Lesage comes from Normandy. He is a broker. After the war, he lives in Chicago for 3 years, where he works for the Women’s Clothes department at Marshall Field’s.
Returning to Paris, he starts working with Michonet, meet Marie-Louise (who was the head of the embroidery section at Madeleine Vionnet), gets married and finally buys the workshop which he renames Albert Lesage and Cie.
He opens the workshop to new creations, embroidered accessories and printed fabrics.

Nevertheless, it is his son, François, that will soon be the important figure. He learns his trade with his parents, from whom he has inherited his creativity and entrepreneurship talents. In 1948, he follows his father’s footsteps and leave for the United States. He opens a workshop on Sunset Boulevard in Los Angeles. But just one year later, his father dies and he has to come back to Paris to look after the House. He is barely 20-years-old.

François is both a gifted artist and a serious entrepreneur. He keeps on creating new patterns, with new materials, while associating himself to the main Haute Couture houses. His imagination has no limits, and designer such as Pierre Balmain, Cristobal Balenciaga, Christian Dior, Jean-Louis Scherrer, Marc Bohan, Patou, etc. want to work with him. Elsa Schiaparelli chose Albert and his workshop for all her stitching elements; Yves Saint-Laurent relies on François for all his.
The two most famous embroidered pieces are maybe the Iris and the Sunflowers, inspired by the work of Van Gogh. Each needed more than 600 hours of work. The Iris is composed of 250 000 spangles of 22 colours, 200 000 beads and 250 meters of ribbons.
In the 1980s, the House opens to new designers from all around the world. 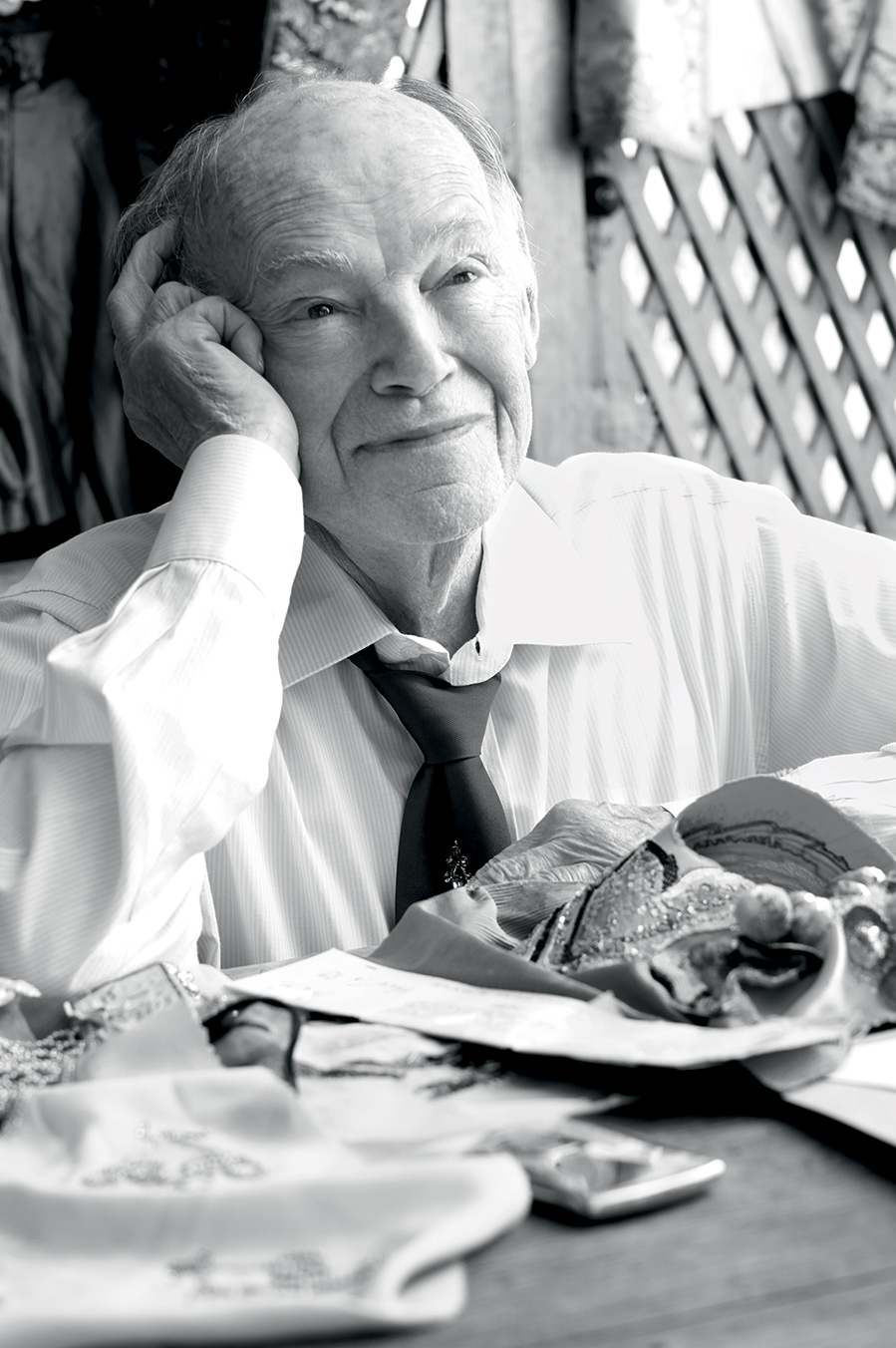 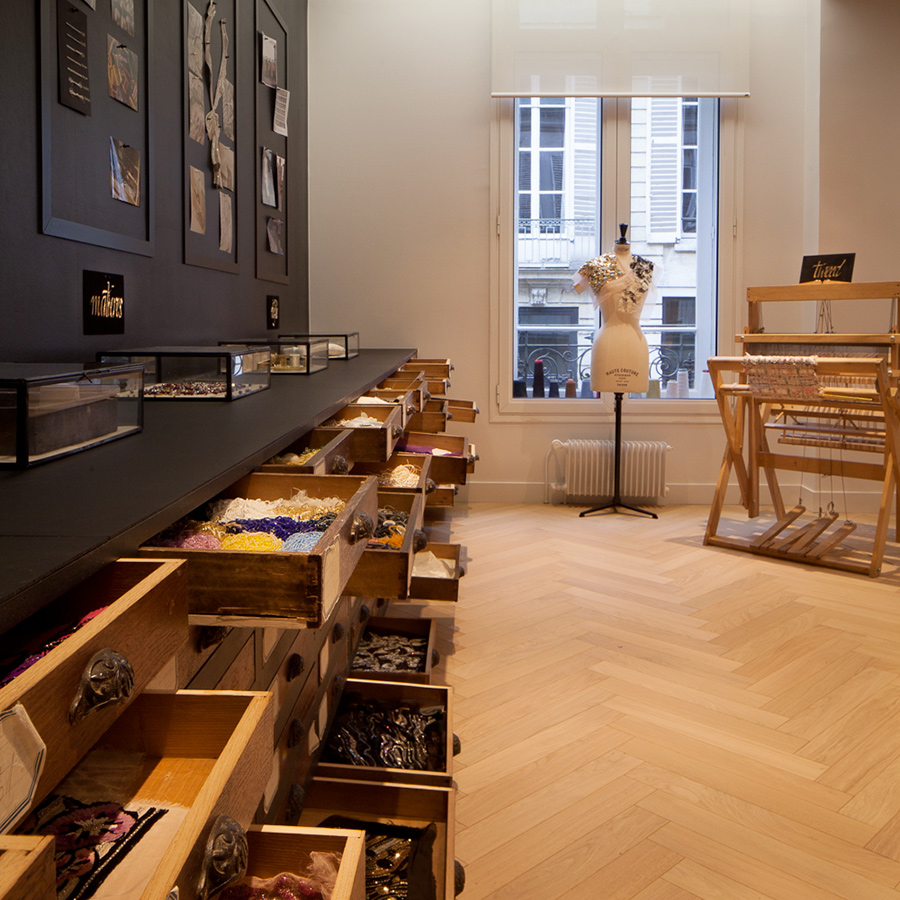 The School
In 1992, François Lesage opens a school in the House. He feels it is important that this precious knowledge should be spread and preserved. Since then, more than 400 students received this special teaching.
Stephanie Henneront (the School coordinator) tells me: “The school and the workshops used to be at the same address. The workshops were moved to Pantin in 2012 with all the other confection houses bought by Chanel. Now all those houses which create the hats and shoes, the stitchings and sewings of the prestigious Chanel House are together, working in improved conditions.
The School is now the sole occupant of the old, historical address: 13, Rue de la Grange Batelière.

The School offers 6 modules from 6 to 30 hours of teaching to acquire the basic knowledge of embroidery (how to use a needle and a hook, ribbon embroidery, passementerie, etc.)

There is also 2 full training on art embroidery. The first one, which was created in 2016 from the House archives, offers 273 hours of teaching. The teaching follows the History, from “Michonet” to “The 2000s”. The second offers 258 hours of teaching through 8 steps, with increasing levels of difficulty, through themes like “Flowers and Fruits”, “Hearts” or “Roses”. 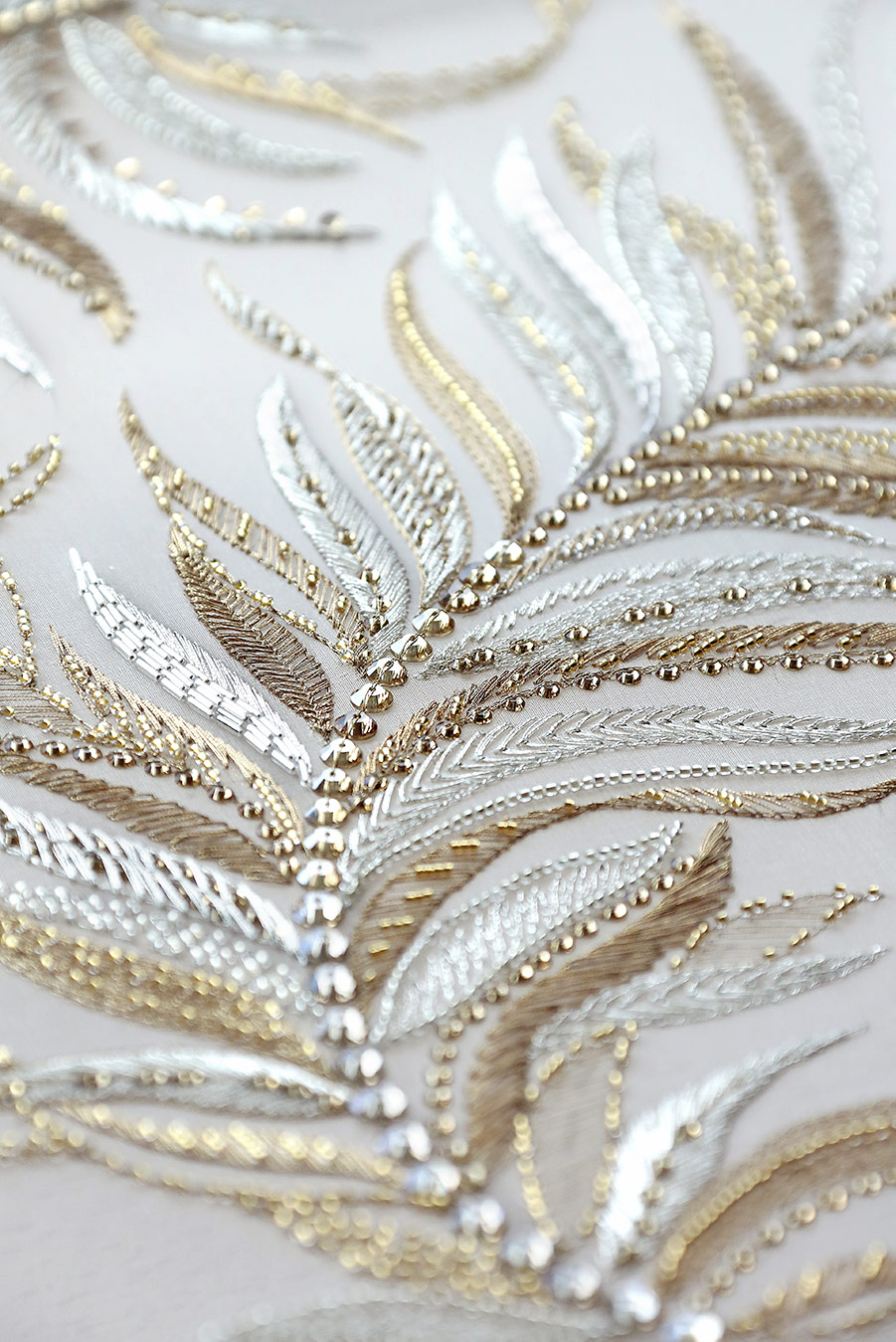 I was able to ask some questions to Stephanie Henneront:

Who are your students?
They come for all over the world, mainly from Europe, Japan, Russia and China. They often come to learn for themselves, but some do wish to become professionals. We always have a preliminary meeting with each of our student to clearly determined their aims and level and offer them the right courses. 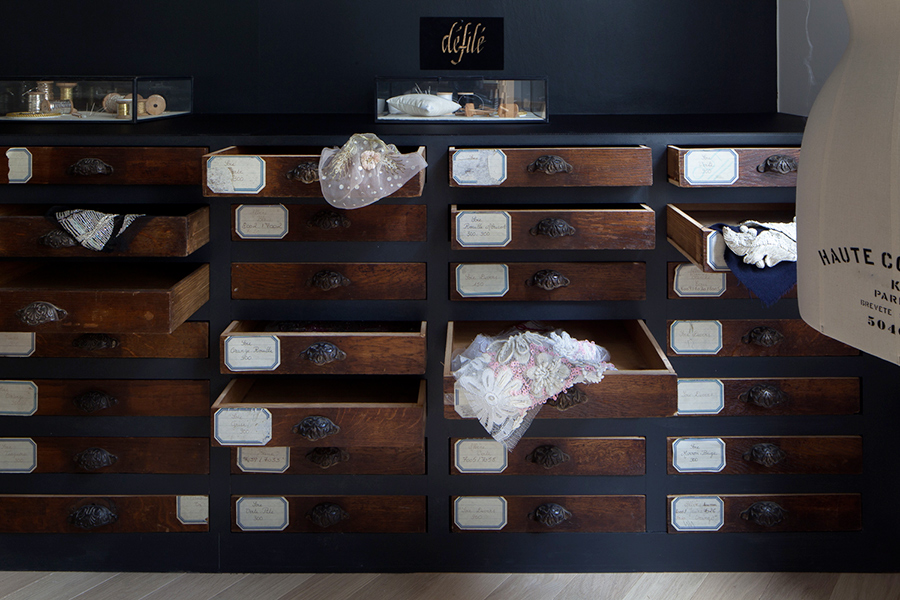 Have all the stitchers working in your workshop followed your classes?
To master all the techniques, they need to have worked at least 10 to 15 years in the workshops. Some of them have studied at the School.

Do you regularly change the models used for your classes?
Each piece represents hours of work, from creation, samplings to execution.
For example, the modules of the class “Fashion History” were created in 2016 from unique samples belonging to the Lesage House and tell the history of embroidery from the 19th century to the present day.
But we are working on new initiation classes that we will soon be able to offer our students.

Today, Lesage has a huge Archive treasure which holds more than 75 000 samplers – maybe the largest collection of embroidery in the world… Oh sweet dream… 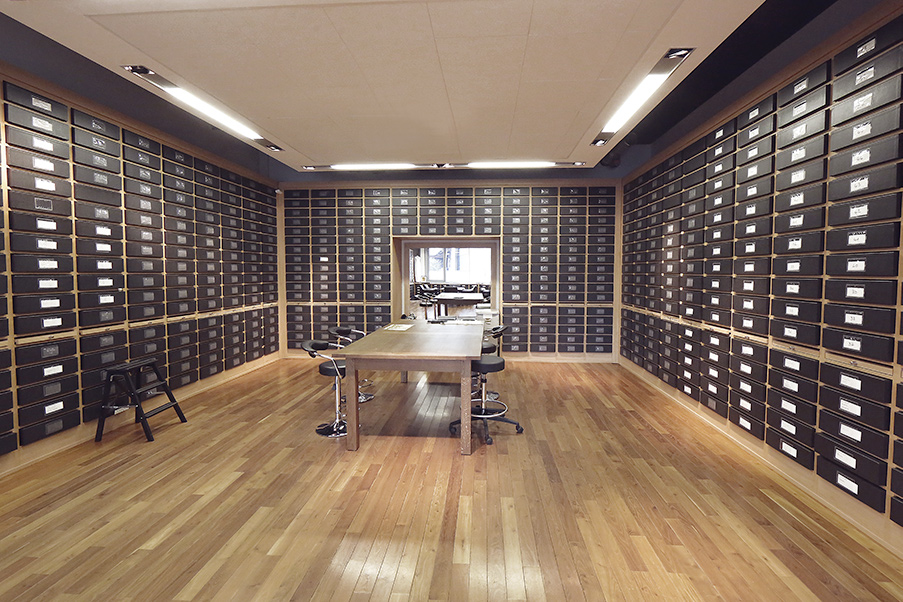 The famous Archives of Lesage House