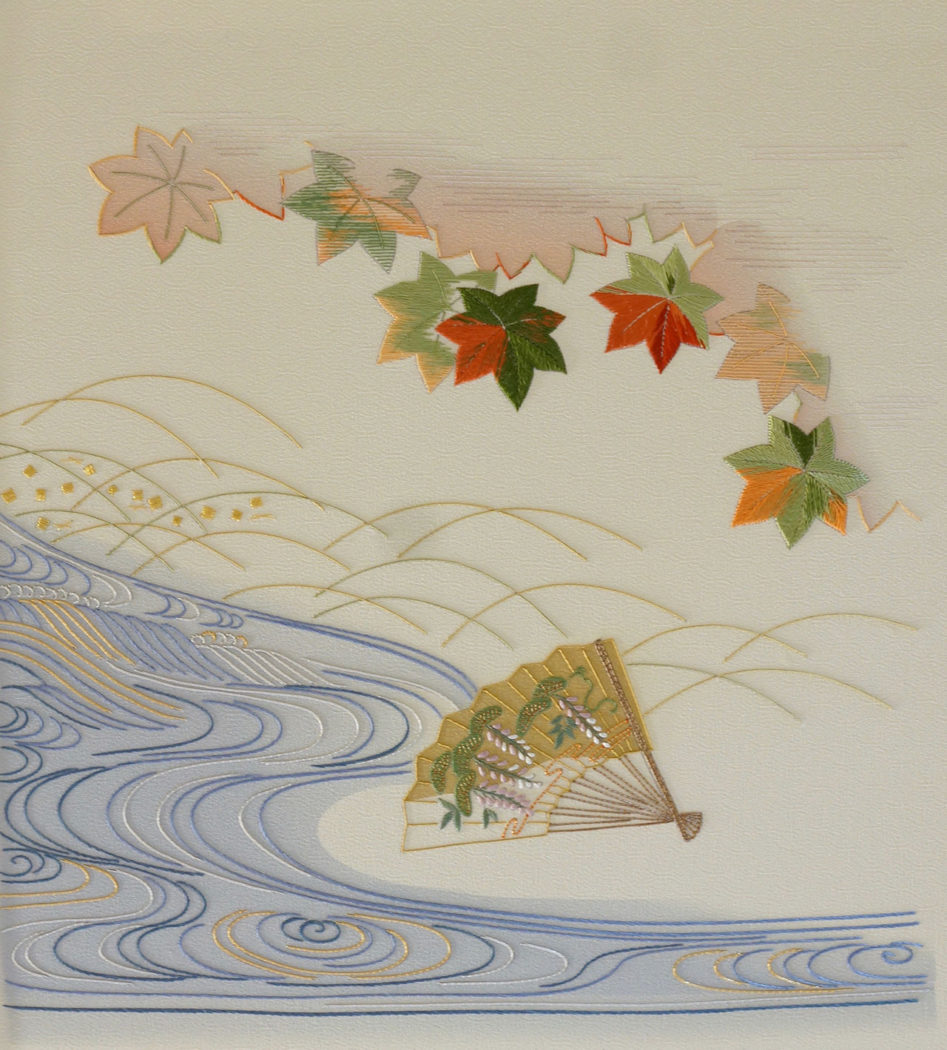 During the next century (Nara Period, 645-794), the techniques, motifs and colours changed to better suit the Japanese taste. During this period, in 756, the Emperor Shomu decided to use a Shoso (rice barn) to hold and protect his treasure, creating in this humble Shoso the first Museum of the world, or Shoso-in. The next Emperors would follow his example and would continue to augment this precious collection (closed to the public for centuries). Interestingly enough, among these precious items, embroideries from the Nara period were found there. In these pieces, the threads used were flat (not twisted) and the most common stitch was the Satin Stitch.

In 794, the Imperial Court moved to Kyoto, marking the beginning of the Heian Period which will last until 1185. The artists started to use embroidery to adorn imperial costumes. 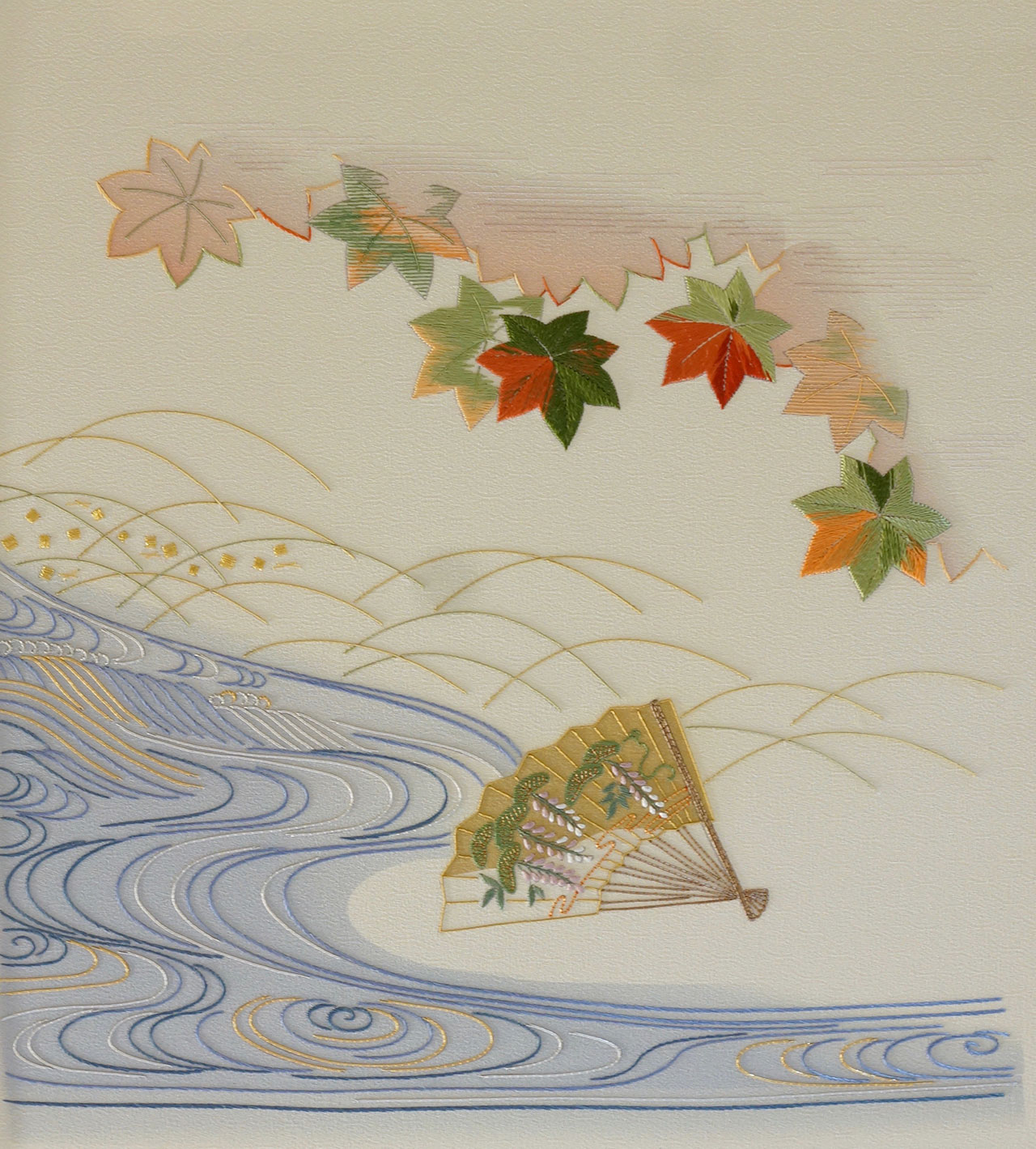 The next period was called Kamakura (1185-1333), where this technique was more often used for its primary usage: to adorn devotional objects. The usage of the Kesas became more frequent. Kesas are old coats with numerous signs of darning, worn by the monks to signify their worldly renunciation (see our article). But people who wished to obtain spiritual benefits started to give away beautifully embroidered coats to the monasteries and the word Kesa is also used for those gorgeous fabrics.

Next came the Muromachi Period (1392-1568), and with it embroidery became the choice technique to decorate the elaborate Bugaku, or dancing costumes. With this new usage, a new stitch appeared: the watashi-nui, a sort of adaptable Surface Satin stitch..
Little by little, embroidery was used for all the pieces of clothing (Azuchi-Momoyama Period, 1568-1600), as well as the Nô Theatre costumes. Also, the Surihaku technique was born, in which glue was applied on a silk fabric, then very thin golden leaves were fixed upon it. The unused glue was then brushed away.
During the Edo Period (1600-1868), the social classes became more and more formalized, with strict rules concerning what each person could wear. The lower classes were forbidden to wear embroidered kimonos.
During these centuries, tastes changed following a regular cycle: moving from very small landscapes to very dense realistic motifs. A new technique was invented: the Sunui which came from the art of Calligraphy. In Sunui, very thin lines were stitched with bright colour threads on a monochrome ground. During the 19th century, the artists started to mix their techniques: metallic threads added to silk embroidery, stenciled motifs, etc.

It was also during the 19th century (Meiji Period, 1868-1912) that what we know as Japanese Embroidery was more formally set. The opening of the country to Western Culture allowed import of goods and knowledge. For centuries, embroidery was known under the name Sewing (Nui). Now it gained a unique and special name: Shishu.
The 19th century saw huge changes in Japan: it ceased to be a feudal society and Buddhism was massively rejected. This was the end of large-scale commissions for embroiderers. Both artists and merchants found a new clientele: The West. Even though traditional motifs and colours had to be adjusted, as well as being used to embellish curtains, table cloth or screens, embroidery became a fine art. It was used to create independent pictures that were to be hanged on the walls of European and American houses. It was even used as a means of currency, exchanged during diplomatic missions.

Today, machines can work wonders but they need a thicker fabric than hand embroidery. Only hand embroidered fabrics can still offer the legendary lightness of thin silk.
Fortunately, in 1976, Shishu became “Traditional National Art”, and as such, is protected. 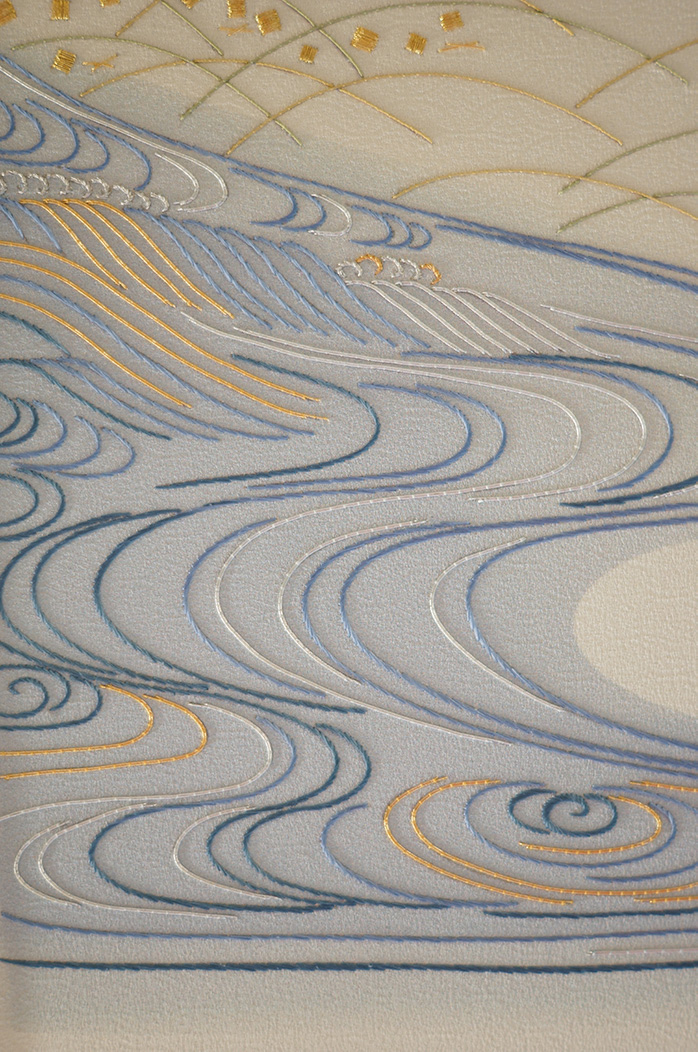 Nuido
Japanese embroidery as it is known today was actually born from the shear will power of Master Iwao Saito and his heir Shuji Tamura.
In 1970, Master Saito opened an embroidery school near Tokyo, Kurenaï-kaï. Only really dedicated students were allowed to attend these classes, as it took 5 years to become professional. Beside embroidery classes, students also learned gardening to improve their sensitivity to nature, to its changes and beauty. Master Tamura wanted to expand this art to more people outside Japan, so he found a place in Atlanta (Georgia, US) and created the JEC (Japanese Embroidery Center) in 1989. With a group of teachers, he started teaching the Nuido, or “path” to Embroidery.
-Nui- refers to the technique, the knowledge of stitches, motifs, etc.
-Do- refers to the spiritual aspect of this technique.

The 3 pillars are:
– Rationality: acquisition of technical skills and knowledge
– Sensitivity: development of artistic sensitivity and awareness
– Spirituality: resulting in a state of peace, calm, and harmony 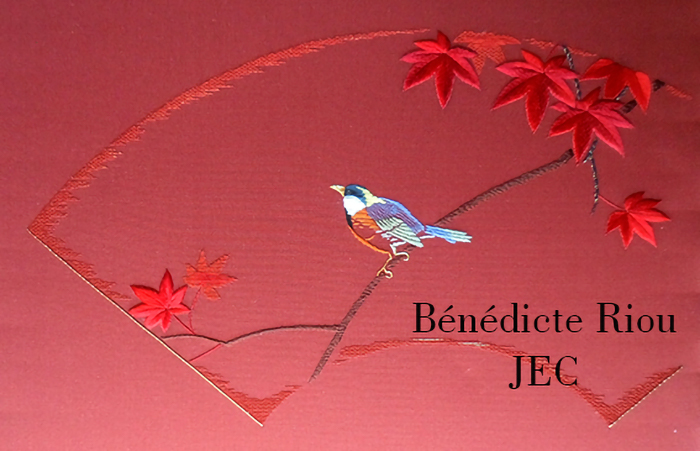 Traditionally, Japanese embroidery was used on spiritual objects, kimonos and obis. As these items are not common in the Western World, Master Tamura had to create a new usage for his Japanese technique. It then acquired an almost exclusive artistic usage, like painting. He also added western techniques such as perspective and shadows. 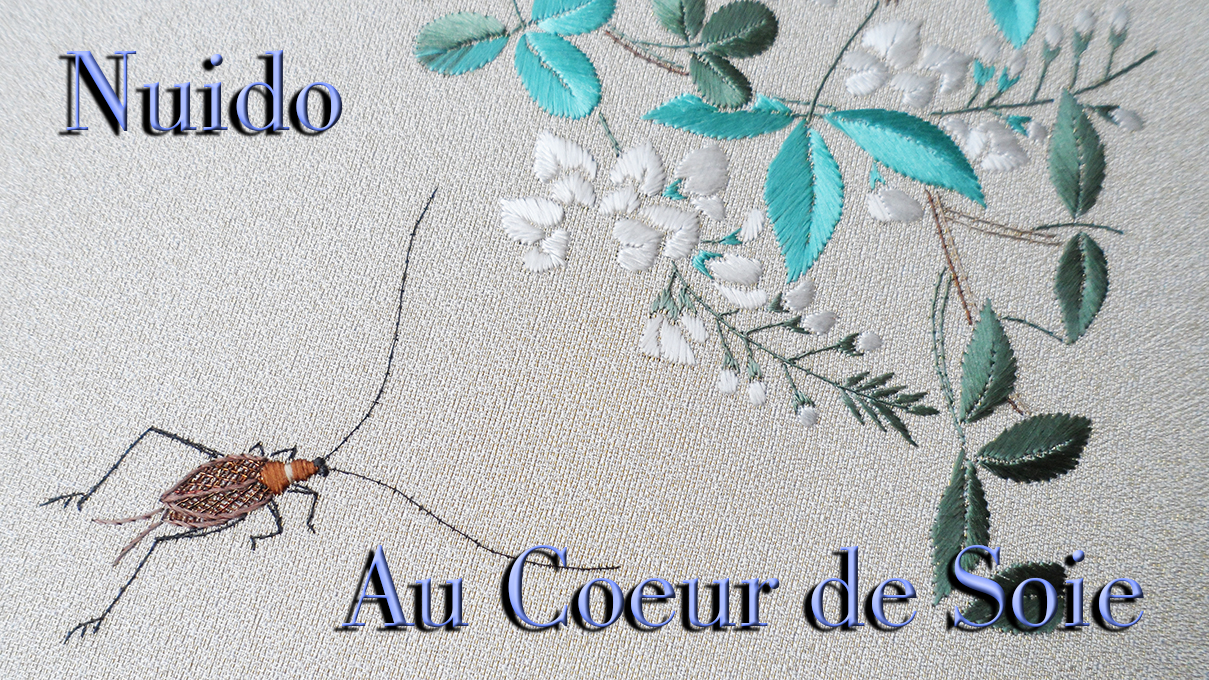 To become a certified teacher, you have to go through 10 stages. Each one is designed specifically for a group of techniques (there are 46 of them) as well as a solid introduction to symbolism, and the use of colours in the traditional Japanese arts. The new teachers can teach the 9 first steps all around the world. The 10th step is only taught by Japanese teachers.

The teaching always starts with meditation. As Master Saito used to say: “The hands are the doors to the spirit.” It is only when achieving inside calmness that our hands can create a harmonic piece.

Tools
It is not rare for an embroiderer to make their own needles or tools. The industry ones are rarely as good! A few years ago, embroiderers were left without needles as the only craftsman able to create the traditional Japanese needles was sick!
For centuries, silk threads (and fabrics) were imported from China. Japanese artists took a long time to master this technique – but once they did, they became extremely skilled!
To create metallic threads, craftsmen hammered leaves of gold or silver to obtain a very thin leaf that was rolled around a silk core.
To couch those metallic threads (too large to go through the fabric and too expensive to be wasted on the back side of the work), the artist used silk threads of different colours.
Traditionally, threads of red-orange hues were used for gold, and white threads for silver.
Padding – which allows different layers on the fabric – was made with cotton or even silk (leaving uncovered patches, creating interesting nuances of lights).

Frames stayed the same throughout the centuries: 4 wooden sticks with holes. The fabric is then attached to it and the whole rests on trestles. The tightness of the fabric is very important as it has to support a lot of tractions from the different stiches. The fabric is also used as a table by the artists. Their tools are:
– Nigiria-basame – traditional Japanese scissors
– Scissors to cut metallic threads
– Needles, always stored on woolen fabric to avoid oxidation
– A small paper waste-basket (origami)
– Awl to twist threads
– Tekobari (a stroking needle to help flattening threads)
– Koma (a square-end bobbin used for metallic threads) 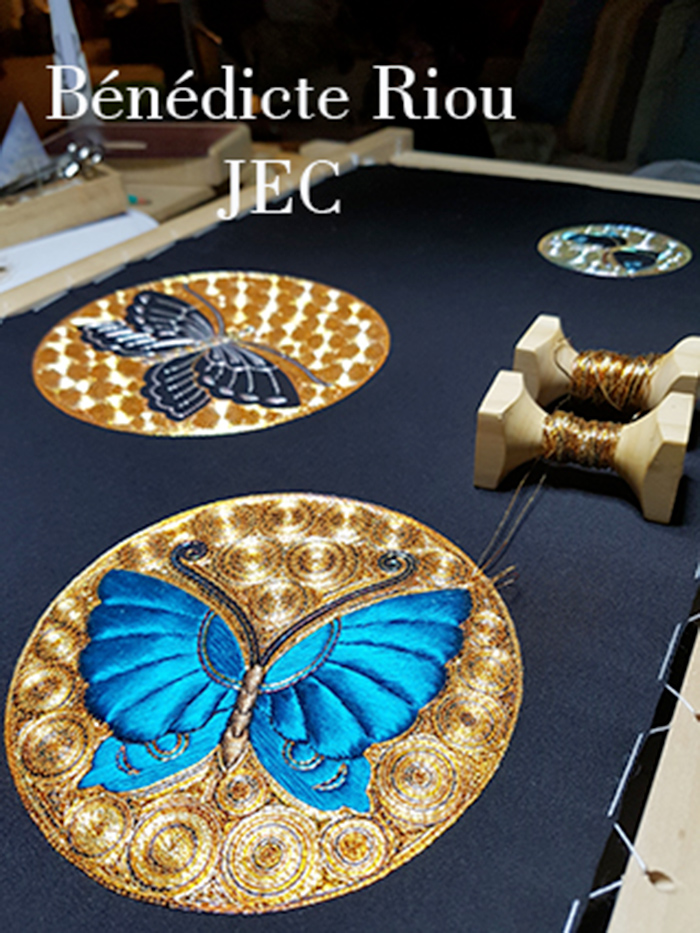 Meet the artists
Cecilia Roger and Bénédicte Riou are both embroiderers level 10. Here they are talking about the fine art of Japanese embroidery.

How is this technique important in your life?
Cecilia: Its spiritual aspect changed my whole life. I need to harmonize my hands and my spirit in everything I do now. But it also takes a lot of room in my home, a lot of money as we only use the best materials, and a lot of time as it is a time-consuming technique.
Bénédicte: I have started embroidering with this technique. I’m passionate about all the traditional arts of Japan and I had tried Kumihimo (braiding) and Chirimen Zaiku (making small objects in silk), among others. When I started Japanese embroidery, I had the feeling I was Alice in Wonderland. I was in the heart of all that I cared about: symbolism, motifs, variety. I was humbly learning a very old technique. This authenticity was very important for me. 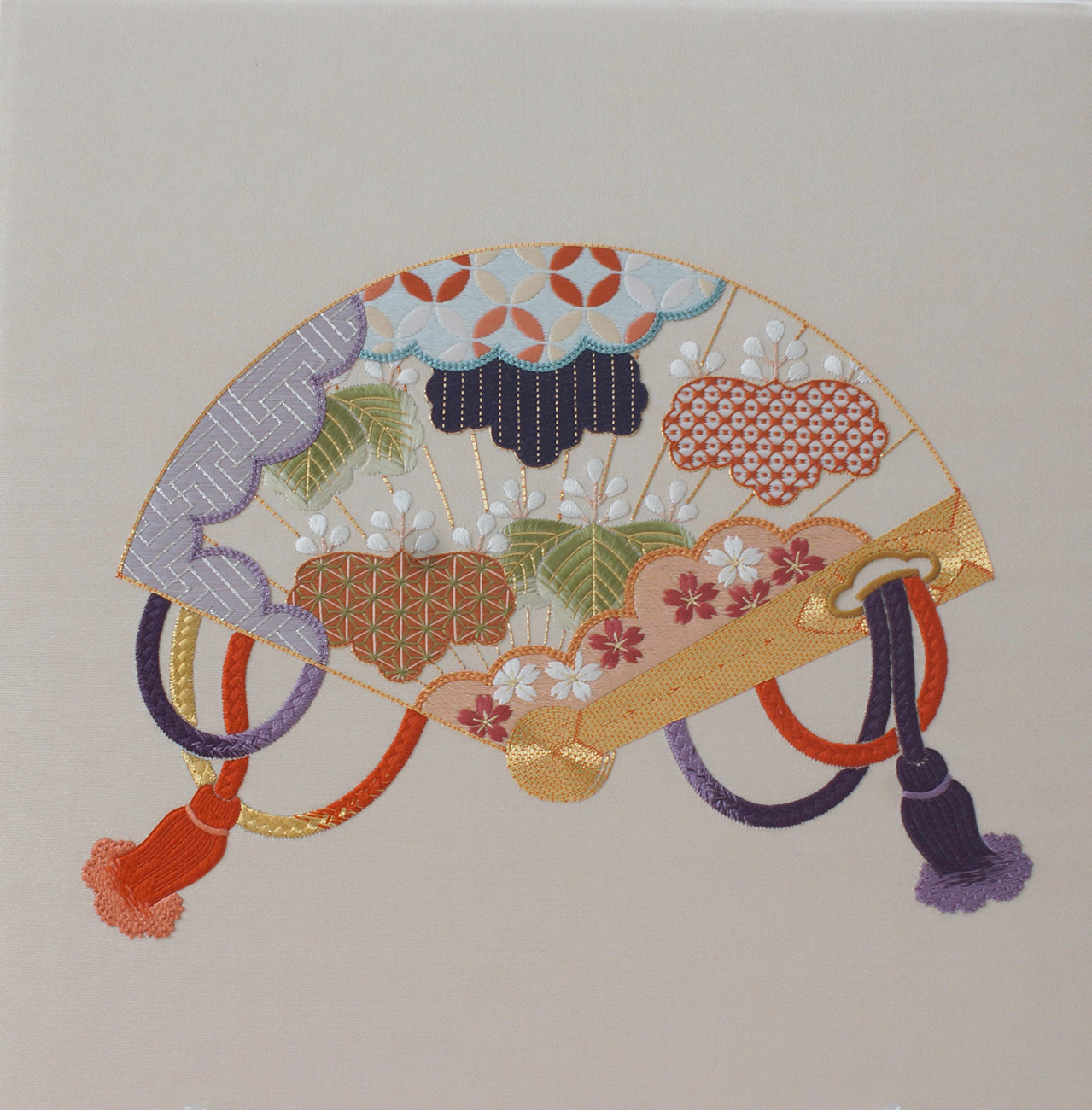 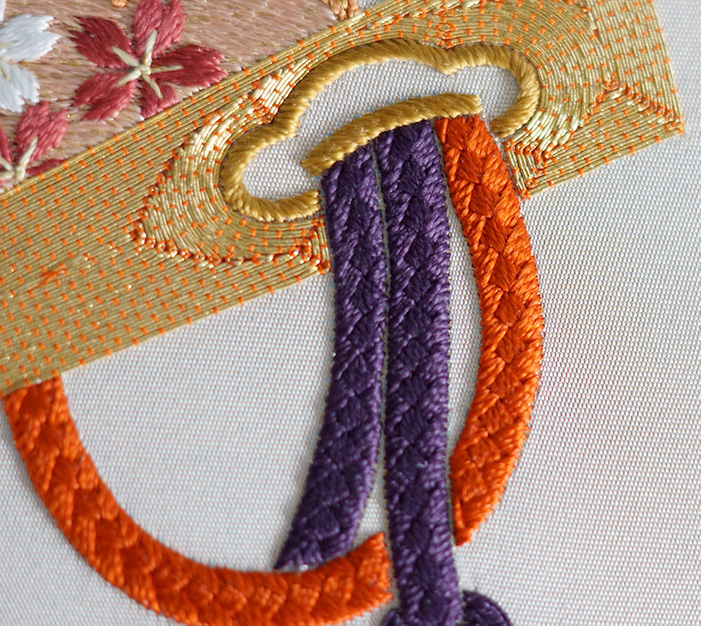 Do you use other techniques?
Cecila: yes as long as they have colours. I do very little White Work
Bénédicte: Not really. Nuido has become my Path of Life. There is enough to learn your whole life!

Where did you learn this technique?
Cecilia: I followed the 10 levels. After that we were asked by the JEC to have an ongoing training every 3 years: I went to England, Atlanta, Japan and France. During those special classes we can study one stitch in deeper detail.
Bénédicte: I followed the first 9 steps in Nantes (France) with Jacqueline Poirier. She is my Sensei. Then I went to Japan for the 10th step. I went several times to Atlanta for the ongoing training, and to be closer to the source of the Nuido teaching. 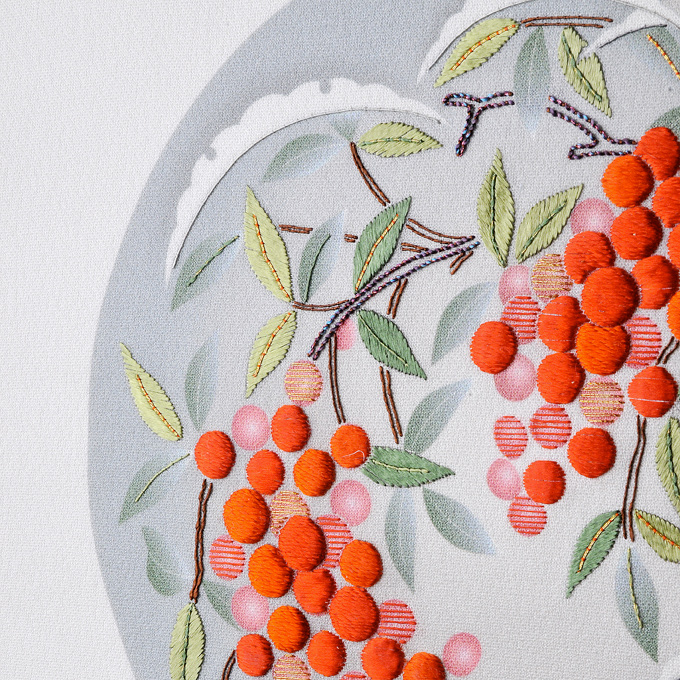 Do you use Japanese words or a translation?
Cecilia: Apart from the Tekobari I use French or English words.
Benedicte: I like using the Japanese words for the material or the motifs or anything connected to the Japanese culture. But with my students I use the English or French words so they can be independent in their studies. 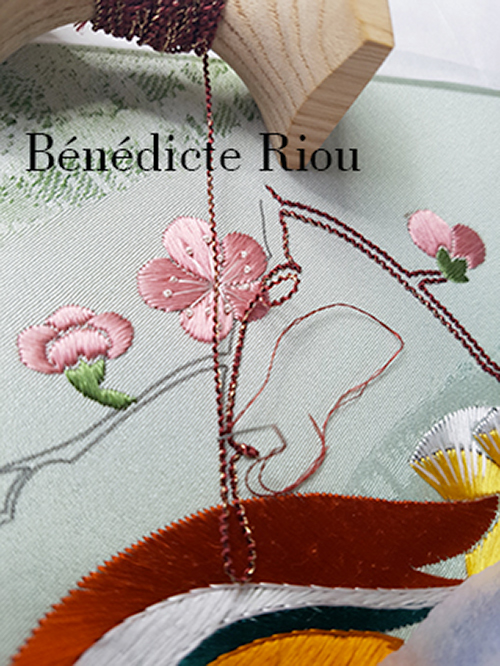 Do you use other tools (western ones for example) with this technique?
Cecilia: No, I have my Japanese tools. When I stitch other techniques, I use other tools. The only time I use a European tool is during the pre-class. As all those tools are expensive, we use a simple tambour frame for this class. If this technique is not made for you, there is no point in buying an expensive frame.
Bénédicte : I only use traditional tools except for initiations, which allow you to discover Japanese embroidery at a lower cost.

What would you like to share about this technique?
Cecilia: The essential link between our hands and our minds echoes with our European culture during the Renaissance. At that time the would-be-painters worked for years learning to make the pigments before being authorized to use them! They needed to know from within the different colours, nuances, the effect each colour had on the others, etc. We are fascinated by the beauty of silk and motifs. The Japanese, thanks to their Zen culture (tea ceremony, calligraphy, ikebana, etc.) have an inner sense of harmony and the role of emptiness. Balance has something to tell us about our inter-dependence, everything being linked. It speaks of eternity, with the cycle of life, of seasons always bringing back ephemeral beauties.
I have known moments of pure grace, pure joy when looking at certain pieces. As the artist use traditional motifs from old pieces and books, there is a deep association between this embroidery technique and Japanese history. Nature is at its core. When you work, you need to be aware of the seasons and choose your colours accordingly.
Bénédicte: I think we, westerners, have lost our ability to create harmony and we love seeing it in the arts of Japan. I wish, as a Nuido teacher, to share this harmony and to develop it in all my students. Even if you only learn the techniques, there will always be seeds of harmony in your work that will touch the heart of others. Sharing Nuido makes the world more beautiful!