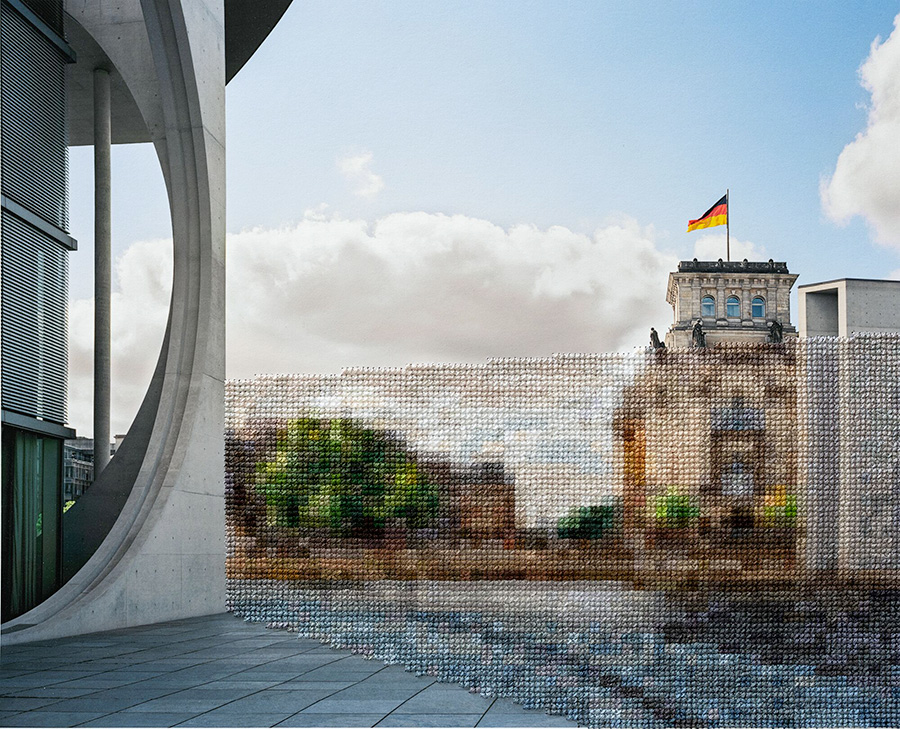 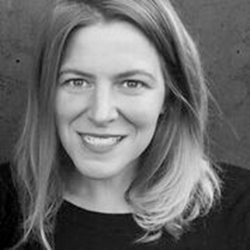 In 2012, photographer Diane Meyer visited Berlin and decided to incorporate embroidery to reveal the Wall in her own way. A committed and fascinating artist.
Interview by Claire de Pourtalès

You are first of all a photographer and embroidery is a new technique for you, right? How did you come to it?
It wasn’t until 2011 that I first started incorporating embroidery into my photographs. Initially, I was interested in combining a traditional, analogue process with the visual language of digital imaging. Through experimentation with the process, I realized I could match the colors in the photograph and create the effect of pixelization. A long time ago, I was working on a series of landscapes using small squares of carpet remnants which also created a pixelated effect. Although I didn’t realize it at the time, I think the embroidered photographs came from my original experiments using carpet remnants. Before I started this project, I had worked on a project that was shot on film but, for the first time, was printed completely digitally. I felt a bit disconnected since all the editing was screen based, and I wanted to work in a more tactile way and return to the notion of the photograph as an object and the materiality of the medium. 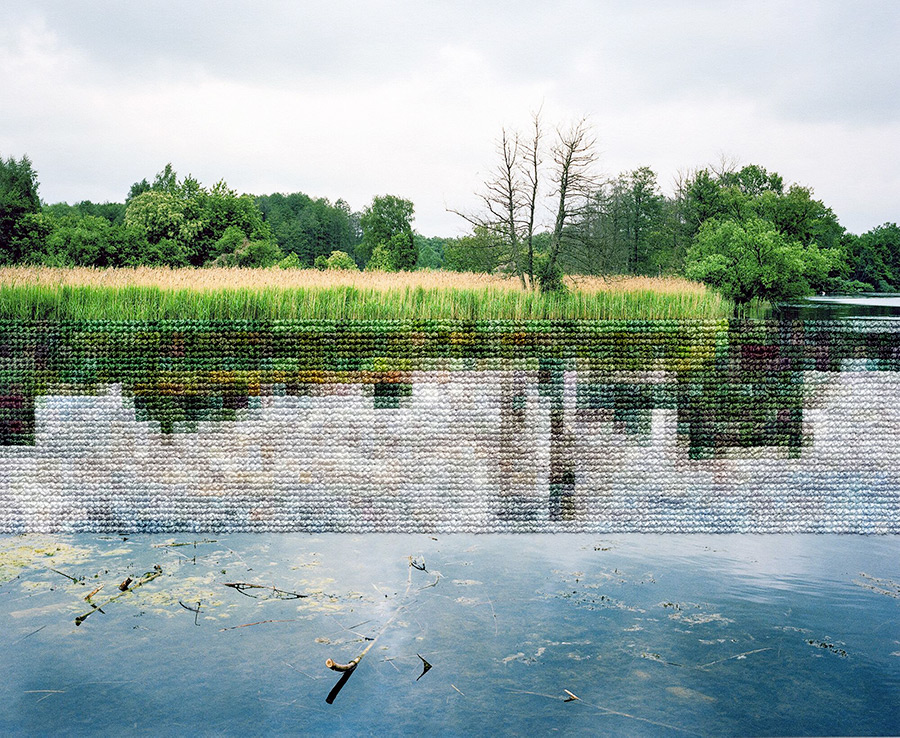 The process has developed into two different bodies of work. One series consists of images taken in Berlin and follows the path of the former Berlin Wall in the city center and the outer suburbs. The second series is based on snapshots and personal photographs taken at various times throughout my life and organized by location.

I have been working on the Berlin series since 2012. Sections of the photographs have been obscured by cross-stitch embroidery sewn directly into the photograph forming a pixelated version of the underlying image. The images were taken in the city center as well as in the suburbs where I followed the entire former 104-mile path of the Berlin Wall. In addition to the physical aspects that point to the former division of the city, I am interested in the psychological weight of these sites. In many of the images, the embroidered sections of the photograph represent the exact scale and location of the former Wall offering a pixelated view of what lies behind. In this way, the embroidery becomes a trace in the landscape of something that no longer exists but is a weight on history and memory. As the embroidery takes the form of digital pixilation, I am making a connection between forgetting and digital file corruption. The embroidery emphasizes the unnatural boundaries created by the wall itself and provides a literal contrast to the concrete of the wall and a metaphorical contrast to its symbolism. The project explores the means by which photography transforms history into nostalgic objects that obscure objective understandings of the past. 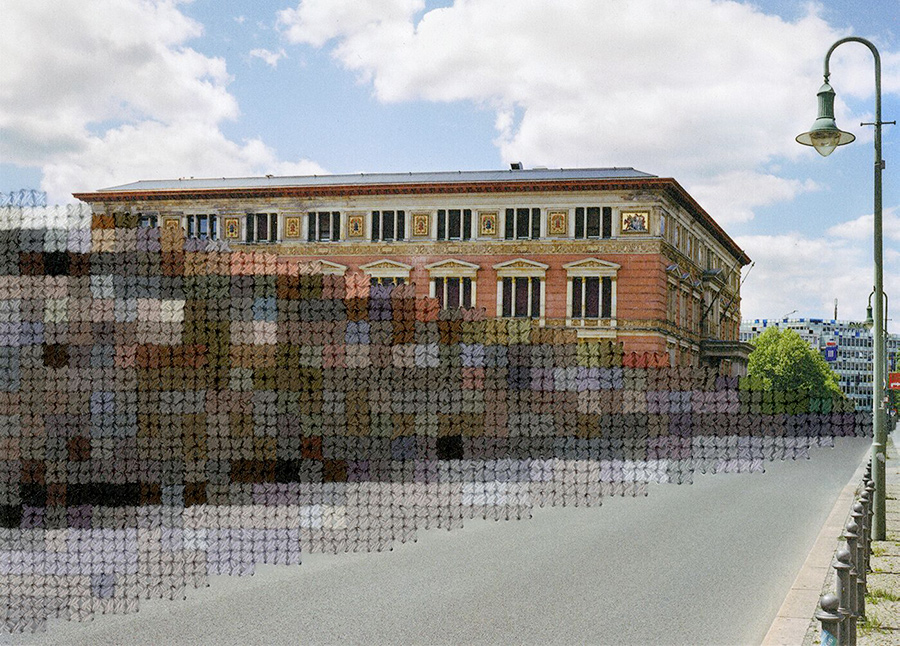 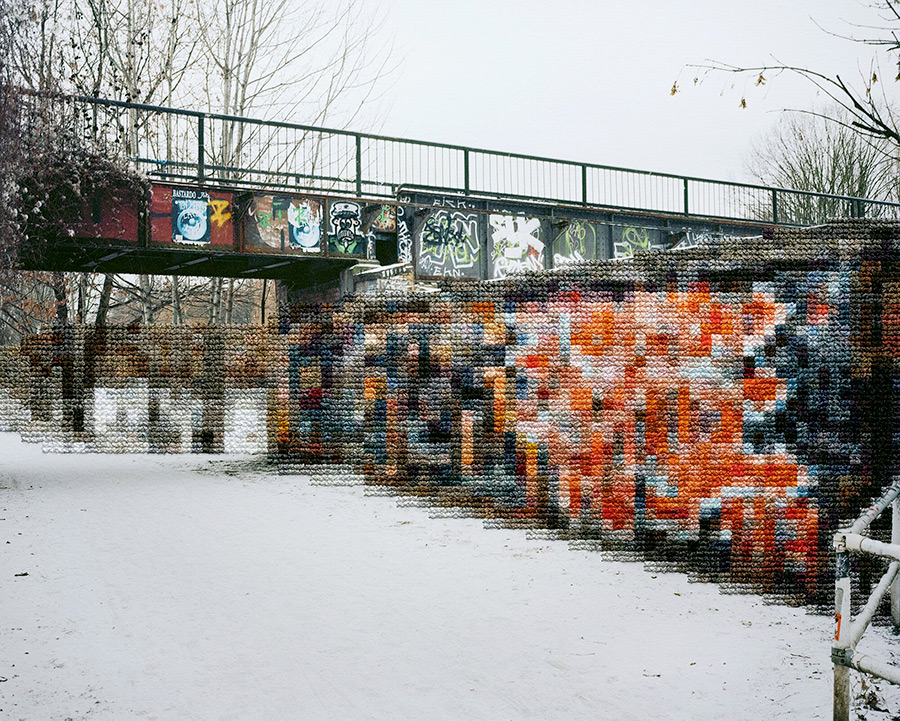 I started my work in Berlin, but the vast majority of the embroidery stitches were done in California. Embroidery takes time, I have 43 images and each has been embroidered in 3 copies (all are identical, with the nuances that manual work brings). I returned to Berlin in 2013 to complete my photo series. I wanted to open up my color palette. The project had started in January, under the snow, with dark, gray and neutral tones. In May, I was able to include many shades of green.

It has been interesting to hear reactions to the work. The curator Claudia Bohn Spector wrote of the work that the “stitching pierces the photograph as it heals and conceals the historic fabric to which it alludes, providing a poignant contrast to the unyielding brutality of the Wall itself and reminding us of both photography’s and history’s considerable artifice.” While this wasn’t something I consciously was thinking about, I really appreciated this interpretation of the embroidery as a metaphor for healing. 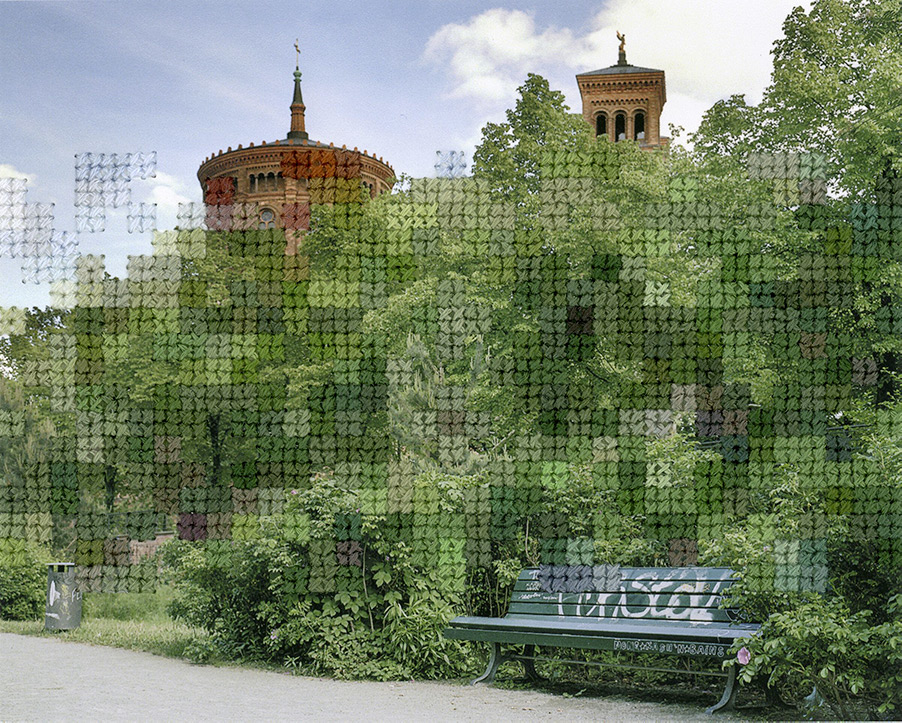 In the second projet, Time Spent That Might Otherwise Be Forgotten, the cross stitch embroidery is directly done on the family photos. I wanted to play with the idea that family albums are collections of an often idealized universe. As the negatives of these photos are lost, I worked on scans of these photos, not on the original pictures. 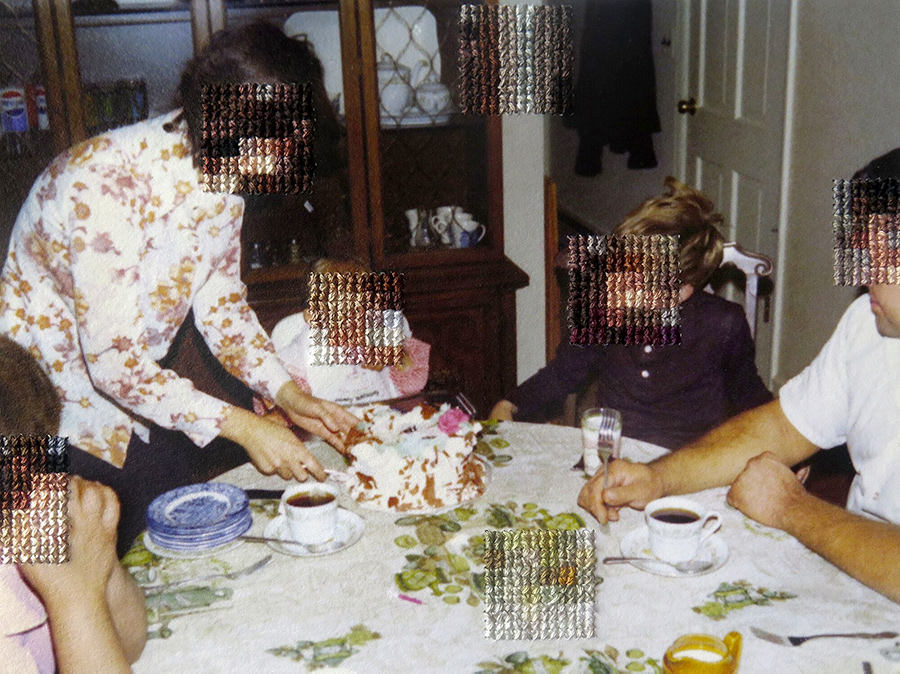 By obscuring what would typically be the most important parts of the image, otherwise overlooked details are brought into focus. I was thinking about the ways in which photographs replace memory and lived experience and the ways in which family photo albums become curated collections that create an idealized narrative. By emphasizing a tactile process, I was also thinking about the implications of the ways in which photographs have become dematerialized- primarily viewed on screens rather than existing in physical form. Finally, I wanted to create universal images – many of these photos, their context, the position of people, events (birthdays, family reunions …) are found in many families – by hiding the faces, I offer the viewer the possibility of entering himself in the photo. And I wanted these images to be also slightly psychologically disturbing. 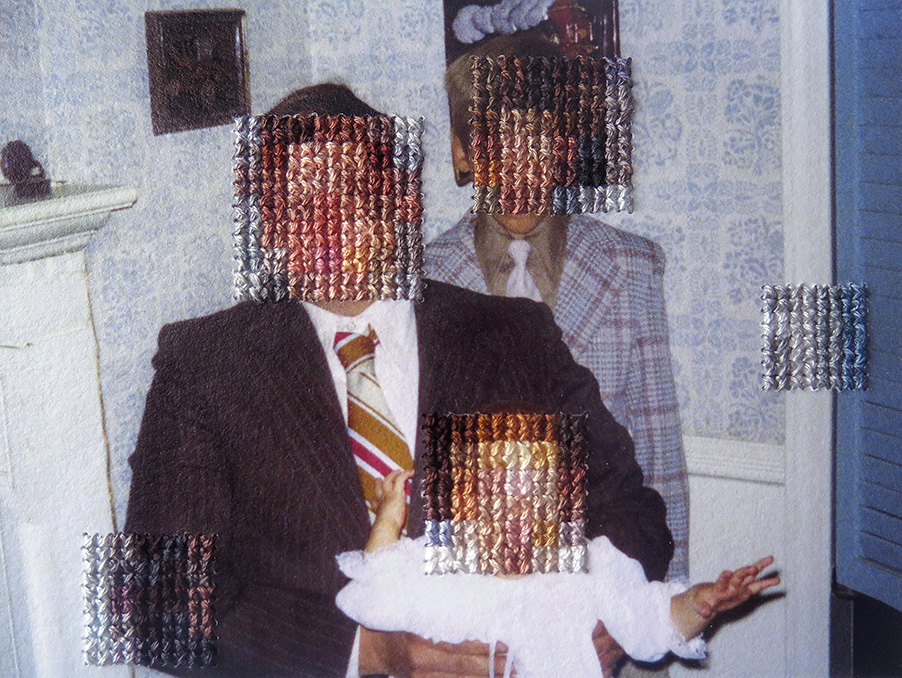 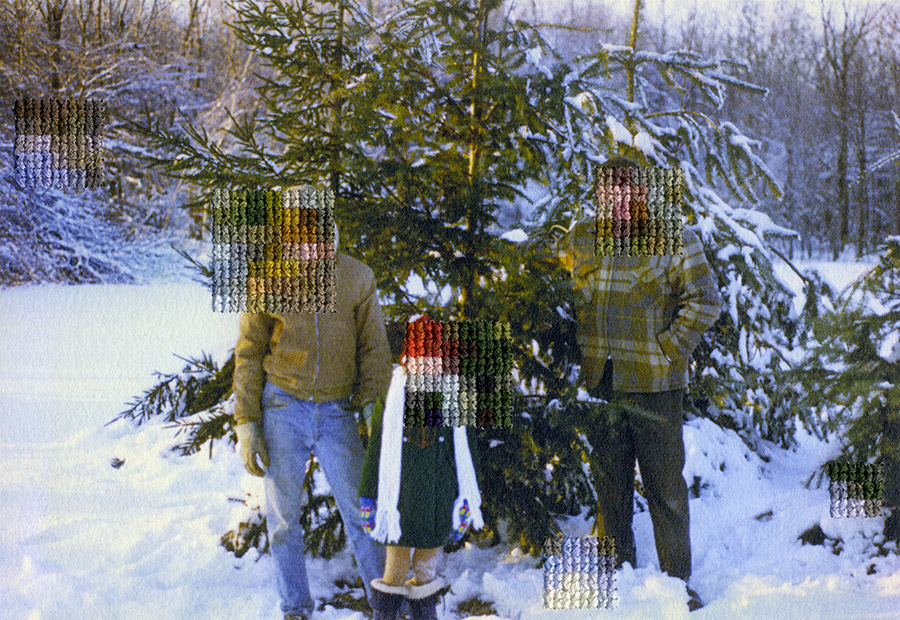 In the series, Reunion, most recently, I have been working on a series of hand-embroidered photographs based on found elementary school class pictures from the 1970s.
In the class photographs, the faces of the students, or what would normally be the main focal points of the image, are obscured with cross-stitch embroidery made to resemble the digital pixel structure of the image. By obscuring what would typically be the most important parts of the image, otherwise overlooked details are brought into focus such as body language and other embodiments of social convention. I am interested in exploring these details to reveal not only the relationships between the various figures, but also how, even at a very young age, children were taught and instructed to pose in particular ways, often based on gender. I am interested in this time period not only because it is my own generation, but because it is the last generation to have a childhood unclouded by digital technology. Back in the day, taking a class photo was a unique event, taken in a formal way – which is completely gone today. 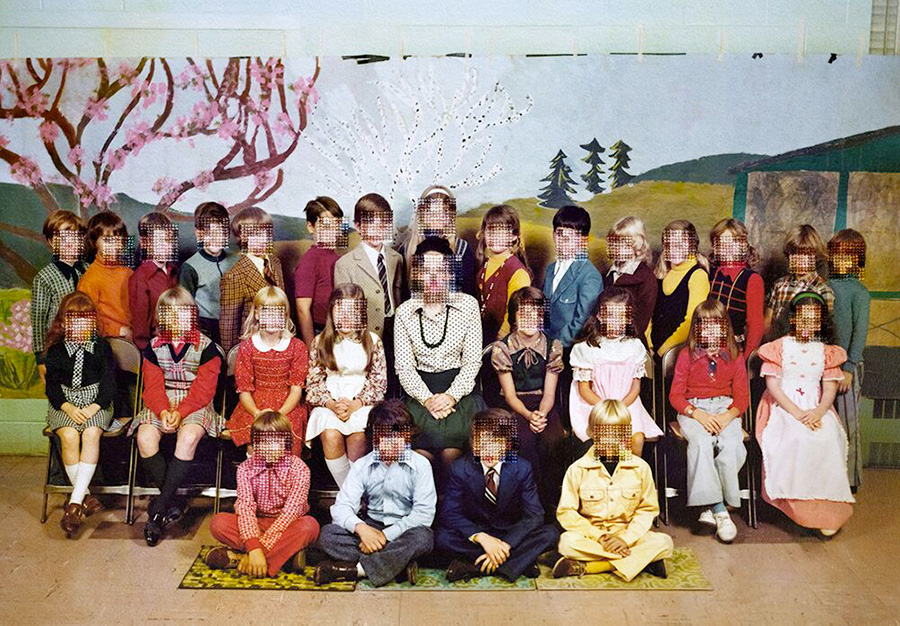 You lived in Berlin in 2012: was that where you got the idea for the Wall or did you go to Berlin to put your idea in place?
I went to Berlin in 2012 to participate in an artist residency, but did not anticipate that I would ultimately create a project around the Wall. Initially, my interest in going to Berlin for a residency was just an interest in checking out the city as I had reading so much about the huge contemporary art scene in the city. However, when I went there, I was really struck by the Wall and became very interested in following it. I was 13 when the Wall fell and have a very clear memory of watching it on television. However, once I came to Berlin, I realized how much I didn’t know about it, and wanted to learn more. I hadn’t realized how big the Wall was and how deep it extended into the suburbs and forests- or even that it was a ring that completely isolated West Berlin from the rest of West Germany. 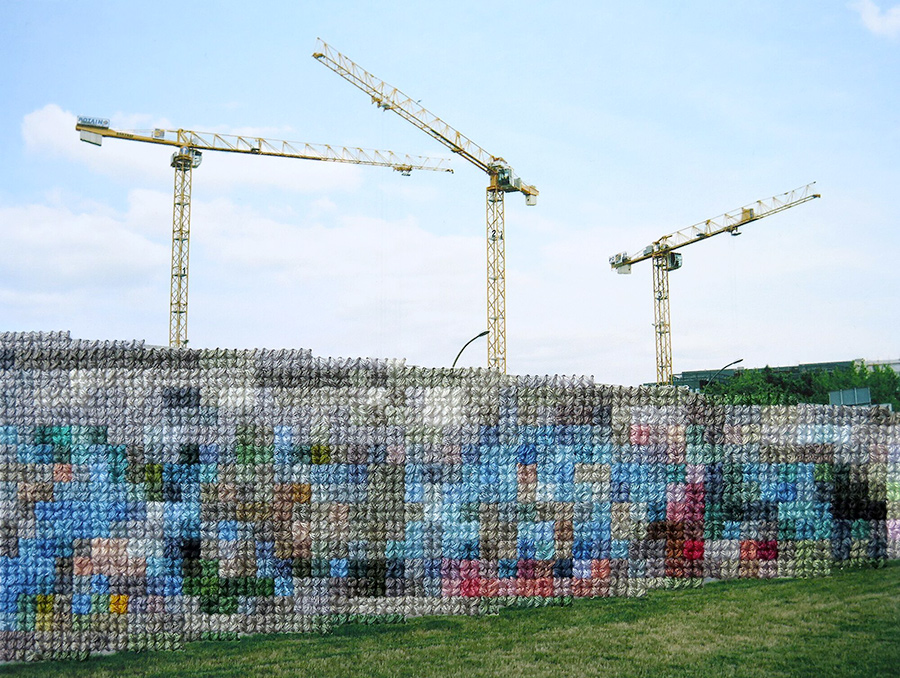 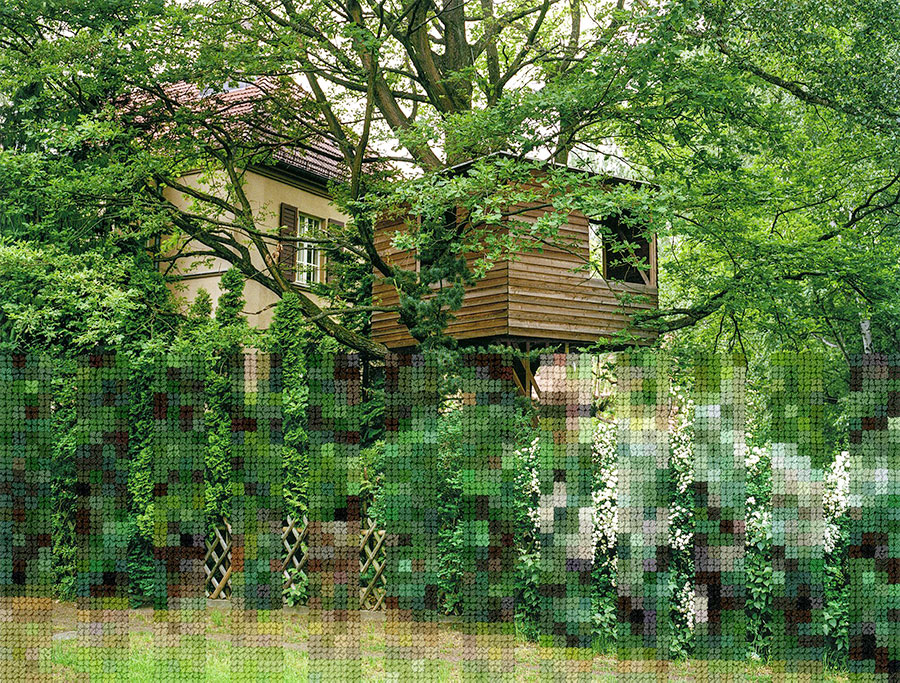 I also became very interested in trying to find subtle clues that remained in the landscape even when the Wall was no longer there- small patches of trees that were smaller than others nearby, open plots of land, new construction, architectural discrepancies in some of the suburban neighborhoods, old street lamps facing the wrong way, etc. Following the path of the wall also provided me with an opportunity to get out of the city center and explore parts of the city and surrounding areas I would not have otherwise gone.
It has been interesting to hear from people who spent time in Berlin either while the Wall was up or in the years immediately after the fall and their experiences. Many of the places that the Wall divided are now very vibrant neighborhoods and it is so difficult to imagine that it really was not that long ago that the Wall fell. 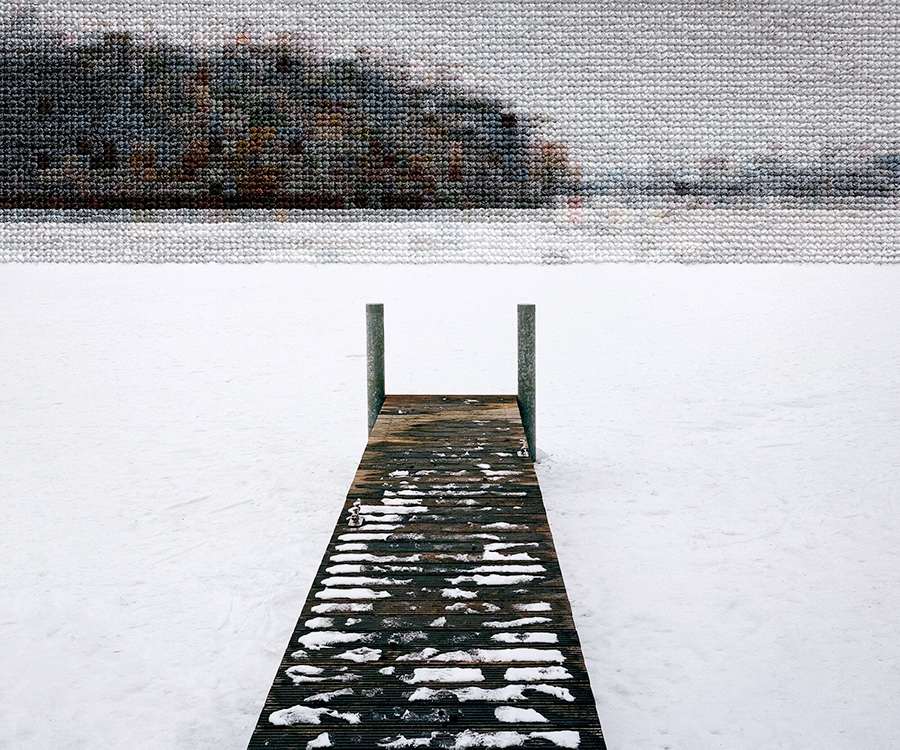 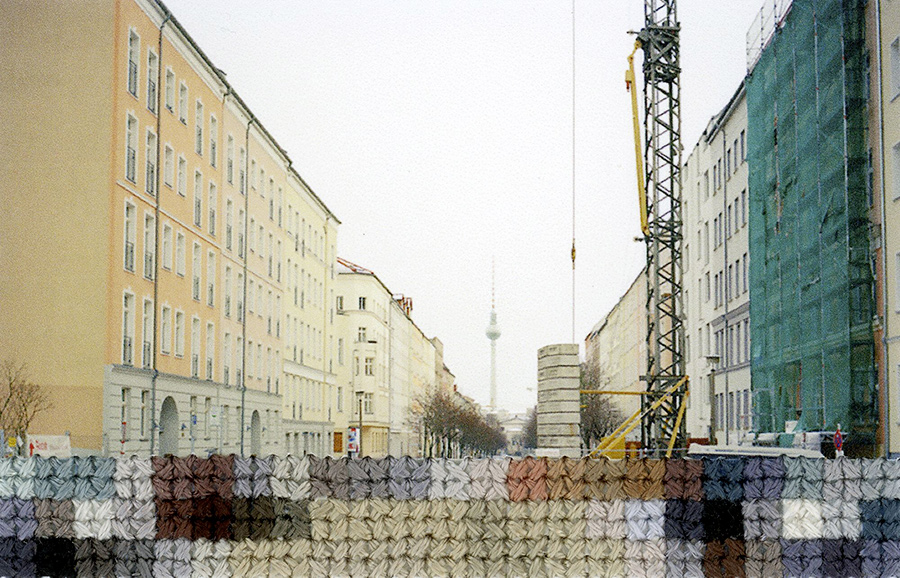 When I started this project in 2012, Barrack Obama was the president and I never would have imagined how delicate and fragile democracy and democratic institutions in the US would now feel just seven years later. Just as the meaning of photographs change over time based on the cultural or historic moment, sadly, the implications and meanings of this project have changed for me in ways I didn’t expect given the current moment.

This project has taken on added resonance in the current political  times  as  conversations  about  a  border  wall  with Mexico have  dominated  news  cycles here in the US. The wall, which Nancy Pelosi recently called an “immorality,” stands in stark contrast to American principles and ideals. The project has also taken on new meaning regarding the importance of remembering history, given that the current  administration  has  little  regard  for  historical  fact  and  has  attempted  to  problematically reframe history. The president has made statements like “What you’re seeing and what you’re reading is not what’s happening.” This tactic of telling followers to disbelieve their eyes and ears is one that’s been used in many authoritarian regimes and is a reminder of the importance of history. Additionally, the president has actively worked to divide the country further through toxic partisanship, a refusal to be a president for all Americans, and references to journalists as “enemies of the people.”

When I was in Berlin, I found it very poignant that, in addition to the many modern monuments and memorials to the victims of WWII and the Berlin Wall, actual historic remnants of the city’s painful past were intentionally left in place and not restored as a warning to future generations not the repeat the past.
Many building facades remain punctured from WWII bullets and severely damaged buildings have been left in place- including the standing façade of Anhalter Bahnhof, the ruined shell of a 13th Century church, Franziskaner-Klosterkirche, and the broken spire of Kaiser Wilhem Memorial Church.