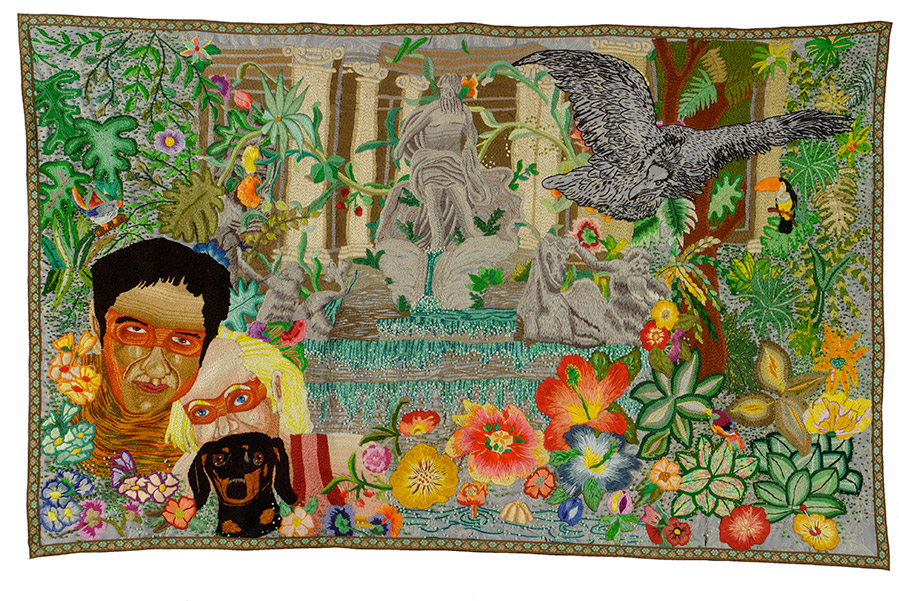 I discovered Chiachio & Giannone more than ten years ago, during their Rohayhu exhibition, in Buenos Aires (Argentina). I was immediately fascinated by the richness of their textile universes which revisit geographical and temporal imaginaries from a guiding thread: the contemporary universe of the gay family.

Chiachio & Giannone’s artistic approach goes against the instantaneous logic of family snapshots shared on social networks. Adopting a “militant tradition of the needle”, it is in the slowness and the detail that this duo of great talent shows since an original work since 2003. Under their guidance, the minor craft genre of needlework and textiles was propelled to the rank of major artistic vector, thus giving a voice to “all the margins”. 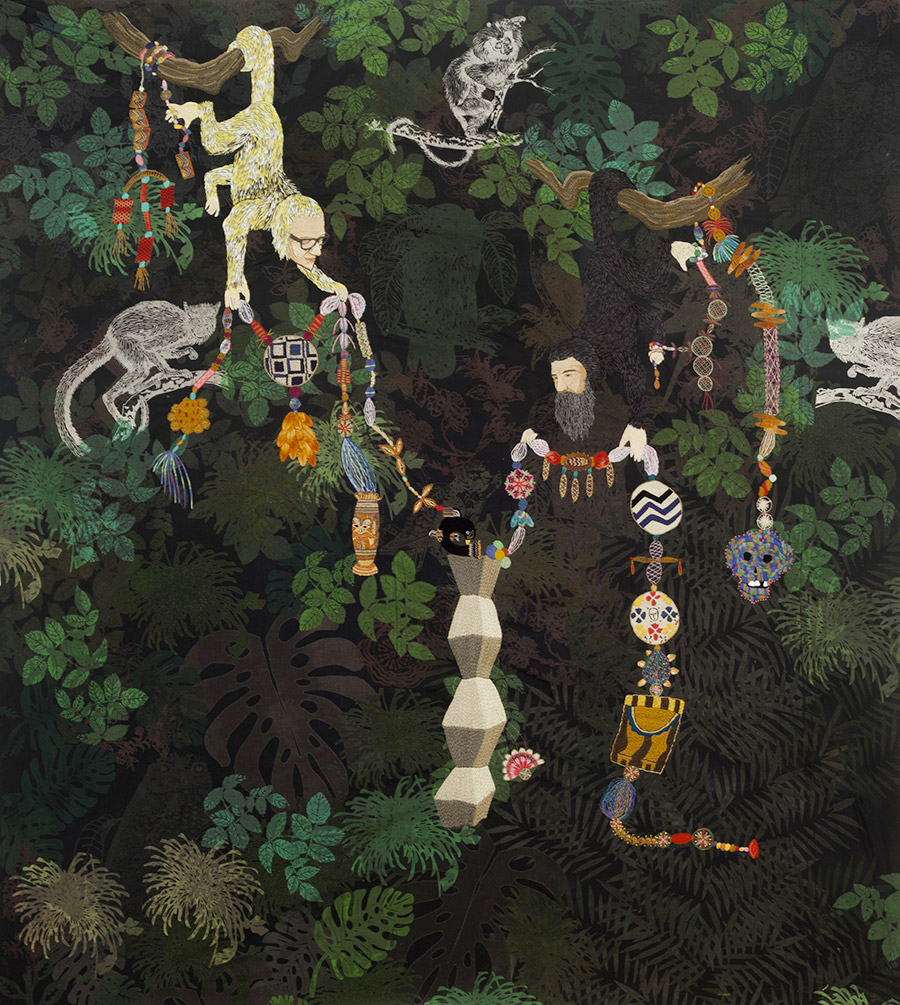 Origins
Leo Chiachio was born in Buenos Aires and Daniel Giannone comes from the Argentine province of Cordoba. They met in 2001 in Buenos Aires. Since then, they have not left each other and have not stopped collaborating, defining themselves as a gay artistic collective. Their couple forms a creative unity, a single and unique whole, a powerful communion that nourishes their art between everyday life and absolute fantasy.

Both decided to transfer their knowledge to other disciplines, and in particular textiles. Daniel had already learned to embroider when he was a child. He then attended a school run by nuns who introduced their students to this practice, to teach them to concentrate. Leo learned about embroidery in books and magazines, as well as in the Once district, in Buenos Aires. The traders installed in the streets of this district are specialized in the sale of fabrics, threads, wool, etc.

This transfer of knowledge from painting is a guiding thread of their work. Chiachio & Giannone like to say that they paint with needles. The use of colors and the exploration they make of their subject is based on their achievements in this field.

However, the choice of textile arts offers them the advantage of being able to detach themselves from contemporary artistic media. By adopting a marginal technique, both feminine and archaic, marked by slowness and perseverance, the artists also follow a process of reintegration of all margins in their cultural, ethnic, sexual or social diversity.

Creative process
The approach of the artists is also influenced by their work environment. Chiachio & Giannone embroider at home from 2 p.m. to 9 p.m. every day, listening to telenovelas* on the radio. This sound environment adds kitsch to their work. They sometimes work with assistants and receive their friends while embroidering. Sometimes they spend several years embroidering a single work. They therefore work on several panels simultaneously, while traveling in the meantime.

They use various techniques, which they perfected with the late Alicia, then president of the Asociación de Bordadoras Argentinas. They superimpose different layers of fabric and embroidery and use a wide variety of stitches (chain stitch, French knot, back stitch, etc.). They are also inspired by the prints that appear on the draperies they use and add their own designs, which they print and superimpose on the initial pattern.

In an exhibition dedicated to their work process (Pasaje 17, Buenos Aires (Argentina), 2016), the artists show some of their works that they themselves have never seen completely unfolded, for lack of space. They explain that the reverse of their work includes many knots and long loose threads, which reveal the loosely controlled, painterly and self-generated character of the image they produce on each of their paintings*.

Themes
The whole of Chiachio & Giannone’s work is based on a central exploration: that of the gay family they form with their non-human companions. All of their work is self-referential, and propels them, with their pets, into extremely varied universes where cross-dressing and fantasy are the order of the day. The self-portrait with their dog Piolin and their other canine companions is omnipresent in their work. With them, they pose, as in old family albums: full-length, in portrait format. 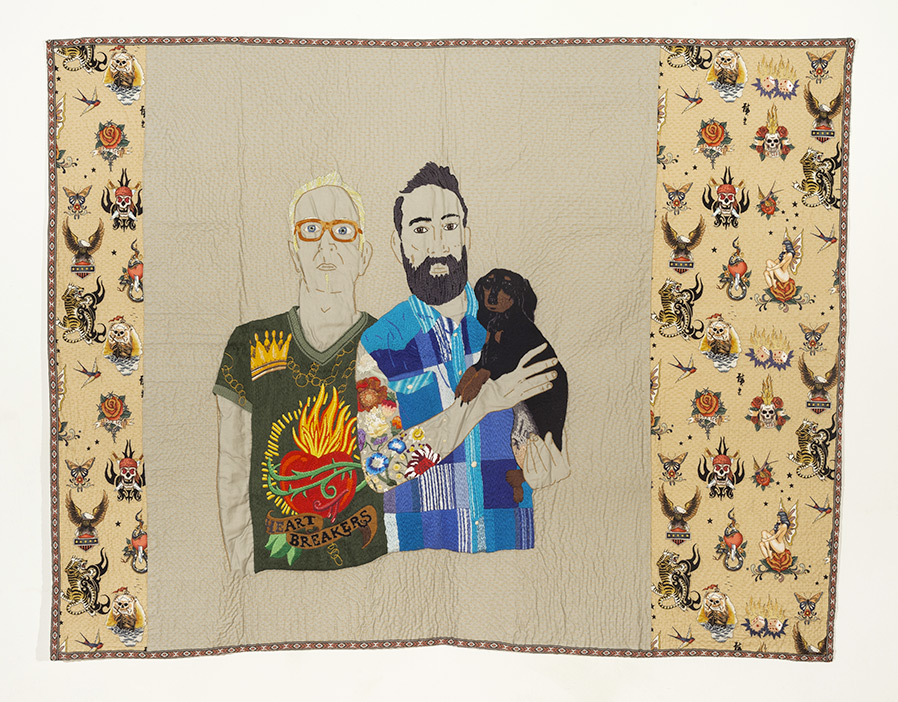 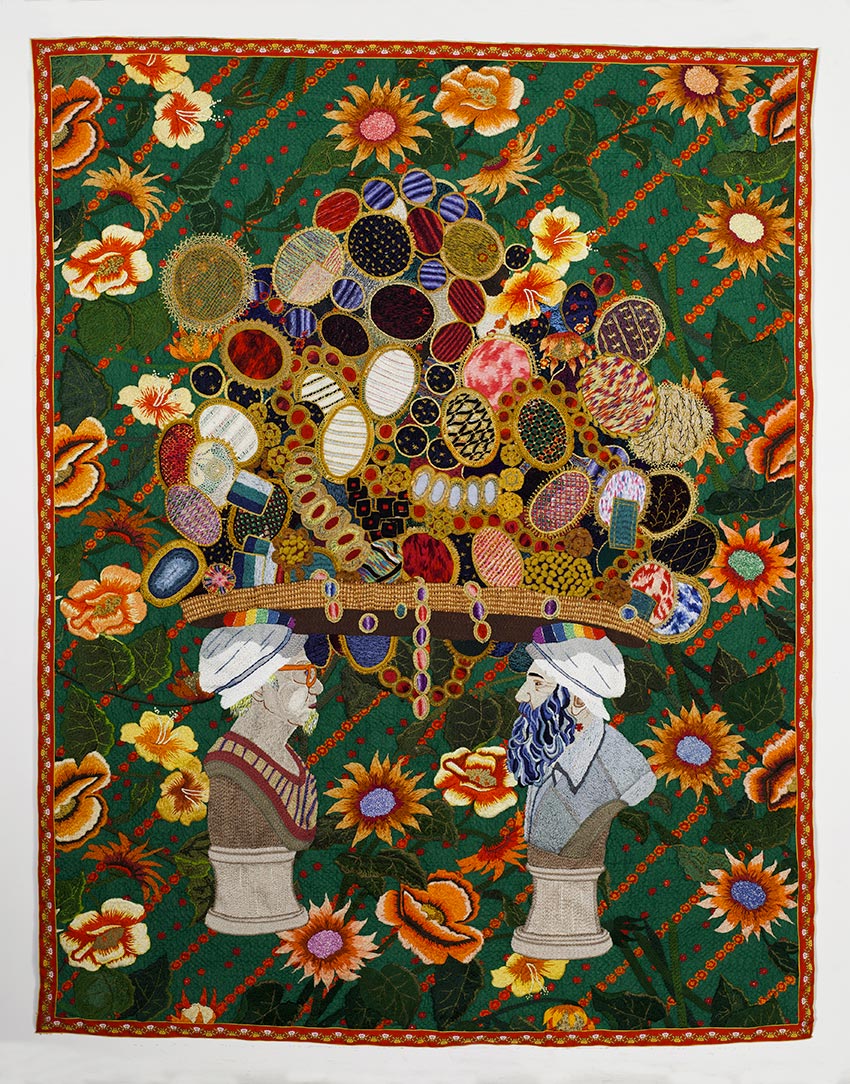 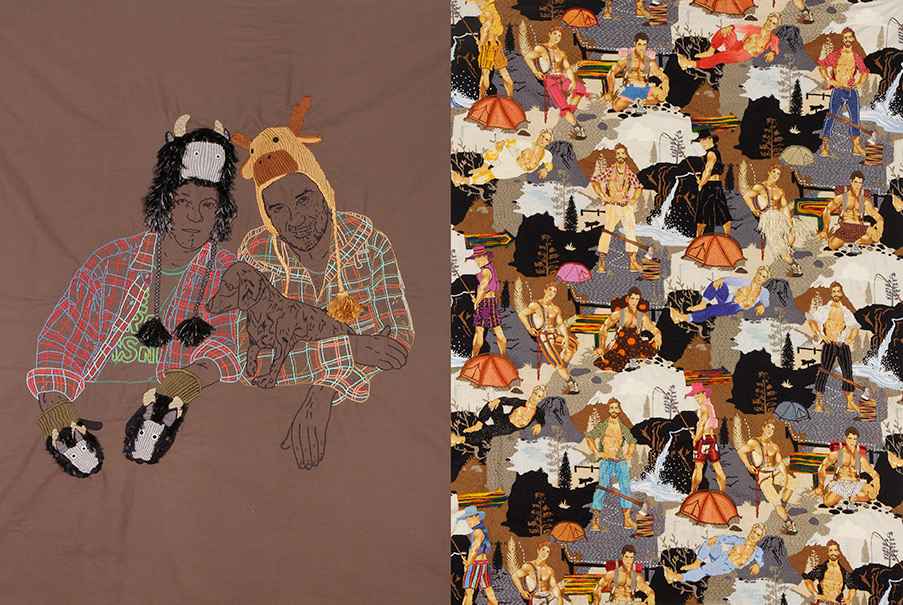 Textile trajectories
This all-out exploration also extends to their trajectory in the textile arts. The artist duo began by working on embroidery. Then, several of their works used this medium combined with quilting. In particular, they explore the textile mosaic in works such as Splash Criollo. 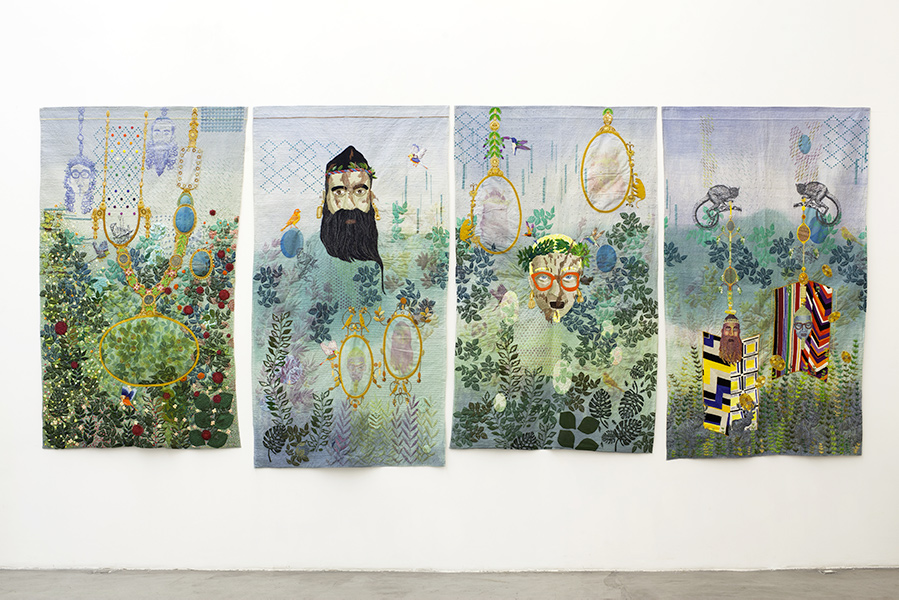 In times of Covid, the artists had to adapt their practice and return to more intimate work, easy to develop in a domestic sphere, especially during confinement. They set about restoring old tapestries (cushions, doilies and table runners) with embroidery and printed silk appliqués that divert the initial motifs. 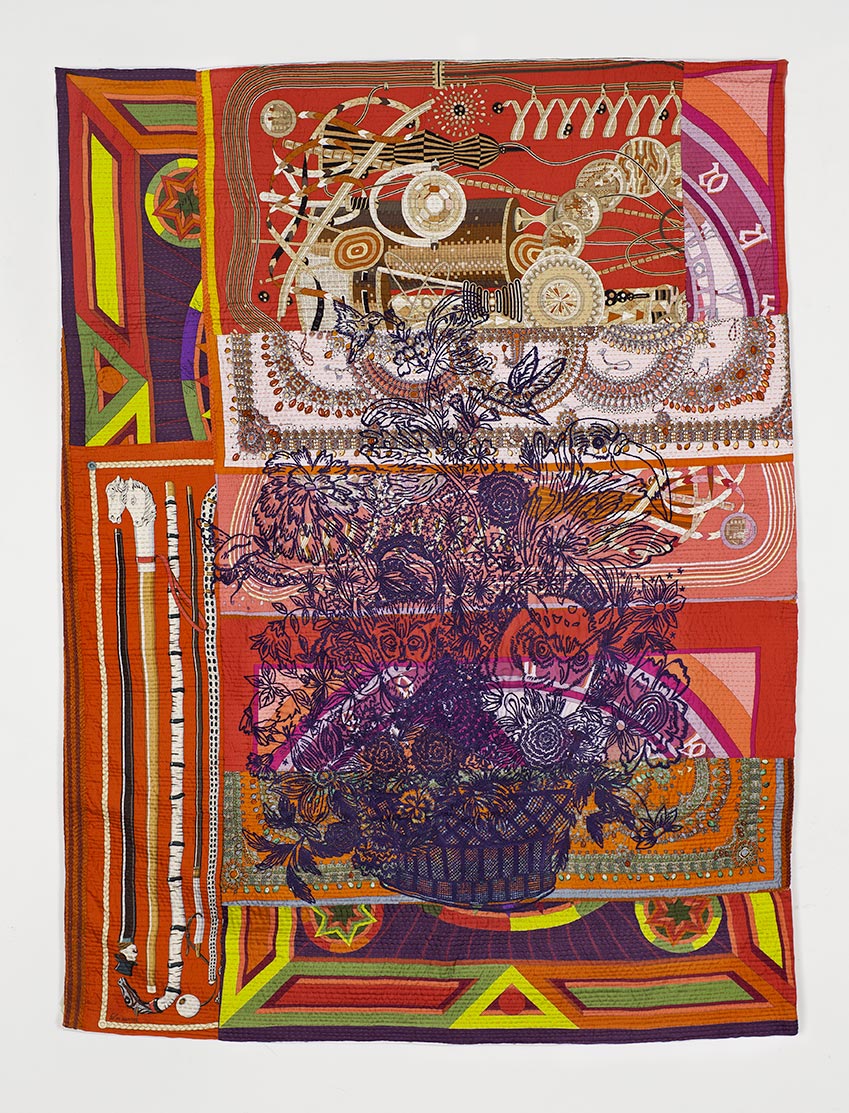 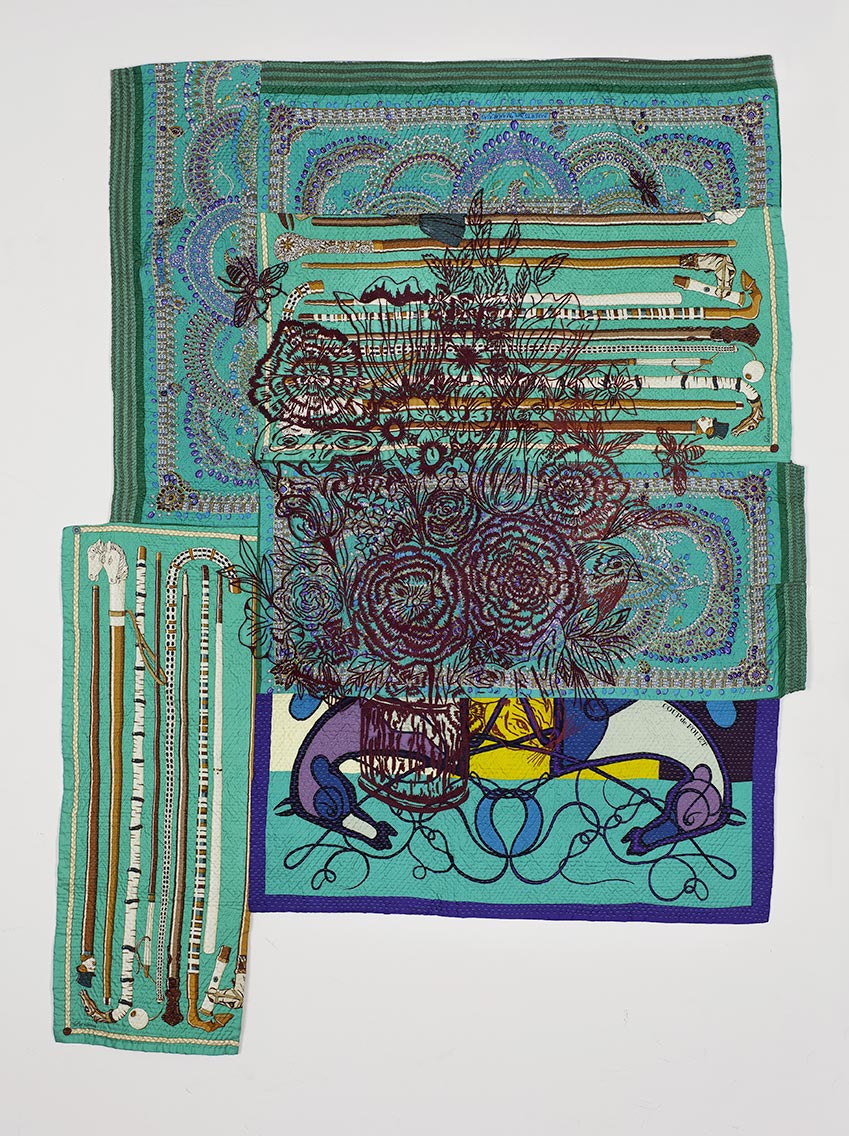 This approach allowed them to give a new twist to their work. During an artistic residencie in the United States, Chiachio & Giannone explored the participatory dimension of their work. They worked on the expression of gay identity by accompanying participants in their workshops in the realization of gigantic gay pride flag from everyday clothes. 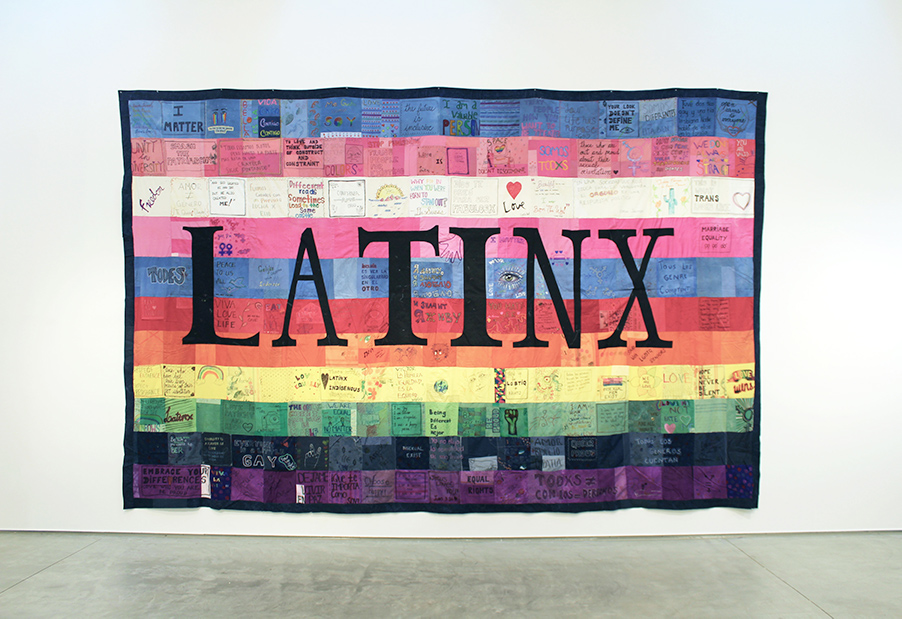 They extend this quest to the reconstruction of a history of queer art in one of their latest exhibitions, “Hope Will Never be Silent” (Antrepeaux, Bourges (France), 2022). The notion of the “six-color” family is worked on the principle of mosaic, which is applied by the use of color patches in fusible fabric assembled on a textile base. The artists also sought to transform the interactions with the people who come to see their works. Visitors are invited to participate in the work in progress throughout the exhibition, which is transformed into a veritable creative workshop. The notion of “Work in progress” therefore becomes that of “Show in progress”. Thus, the artists intend to place their work in a broader community, a playful horizon and a “constellation” approach, which emphasizes the links rather than the personality of the artists*. 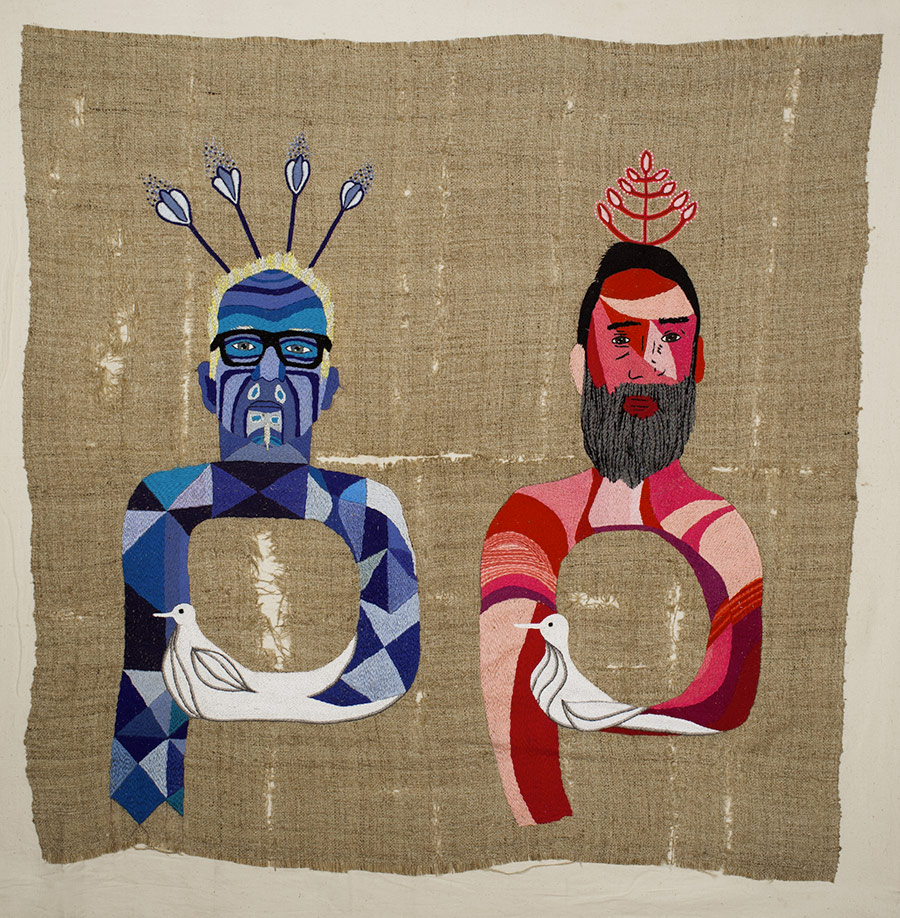 Conclusion
The works of Chiachio & Giannone depict a complete universe, developed over more than twenty years, and in which their taste for play shines through. By embroidering the emotional family ties, the two artists reflect the polymorphic nature of the family, beyond gender or species preferences.

Thanks
All my thanks go to the artists Leo Chiachio and Daniel Giannone, who took the time to read and suggest improvements to the initial manuscript. I also thank my friend Ana Lafon for her wise reading of the text and for the information on the artists’ exhibitions in France. Finally, thanks to Claire de Pourtalès for trusting me with the writing of this article and for her editing work with a view to publication on Le Temps de Broder.

One interview during the Covid-19 pandemic