Some time ago I came across a book with an intriguing title: Resounding Images: Medieval Intersections of Art, Music, and Sound, which consists of 16 articles on the subject of the representation of sound in the arts of Middle ages.

One of these articles, written by Henry Schild, is based on the representation of sounds in a particular type of embroidery. I present to you a summarized version here.

Henry Schild : «Embroidered liturgical veils of the Byzantine tradition are visually rich. They are also eloquent witnesses to the sounds of the Byzantine liturgy. They record what was seen and heard – the real experience of the liturgy by the faithful – and this real experience has left other traces as well: whiff of incense, drops of candle was, all evidence that the liturgy in which these veils took part engaged all the senses. In spite of stifled sobs and calls for silence, the images and texts embroidered on these epitaphioi attest to the fact that the liturgy was an experience that engaged all the senses and was far from silent.» 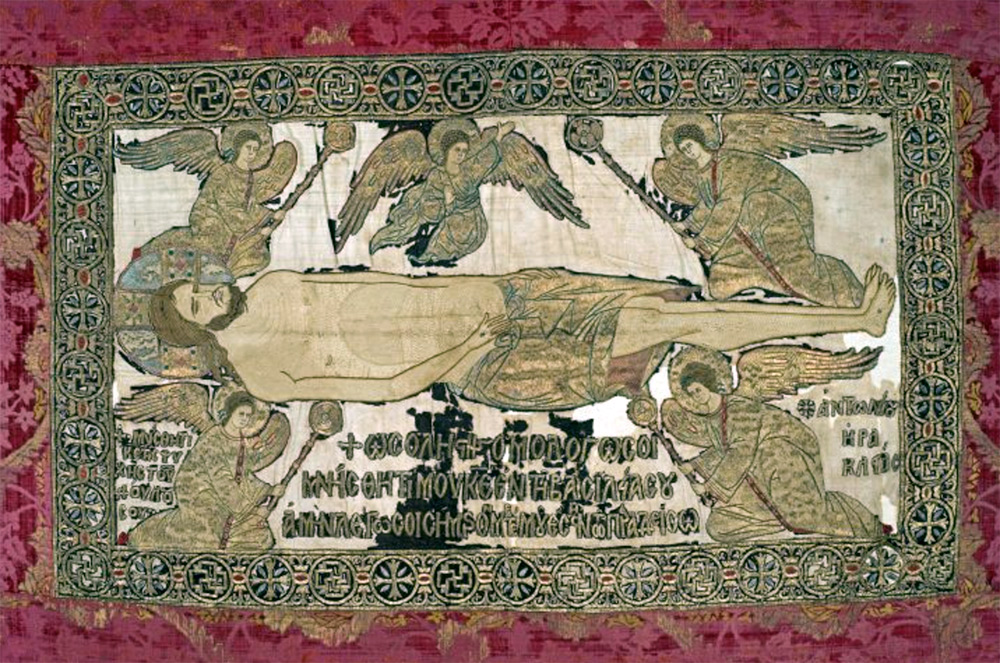 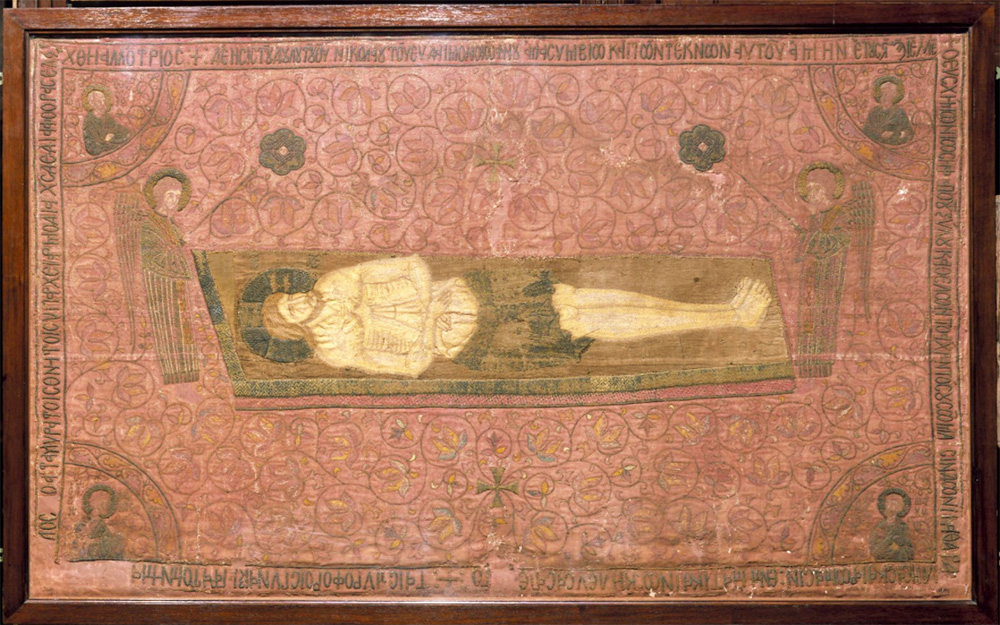 The representation of sounds in the embroidered epitaphioi

An epitaphios (plural epitaphioi) is an embroidered cloth representing the Lamentation over the dead body of Christ. These large fabrics were carried in procession during Good Friday. Byzantine liturgical fabrics had a dual function: to update a historical scene while allowing it to be truly lived through the liturgy associated with it.

Looking at these embroidered fabrics one realizes that a very important element is both absent and represented: sounds. These reenactments, these memories were sound! The gestures, the facial expressions are there to make us “hear” the exposed scene. Prayers and embroidered songs are visually there so that we participate orally in this scene.
Looking at the murals from the same period, one realizes that the embroidered fabrics, painted in great detail, were very present in the liturgy represented. They are worn at certain times of the year, by such and such a person, or in procession. So we know that they had an important role.

The central motif of the epitaphioi is the Dead Body of Christ. Around him are represented angels, human figures, symbols. Very simple at the beginning of the Middle Ages, sometimes with just Christ and 2 angels, the scene quickly takes on a big scale, associating Heaven and Earth, the Past and the Present.

In the oldest veils, angels are both eternal and symbolic beings, wearing the clothes or accessories of the priests they represent. This cohabitation allows the historical scene to become current, but also to reflect a liturgy which, for its part, has disappeared.
It is often embroidered with the words of the Cherubikon (or Sanctus), the song of the angels. Sound = heavenly song.
Around the body of Christ, people lament: either angels, or angels carrying liturgical vestments (or carrying rhipidia, liturgical fans used to protect the sacred Bread and Wine), historically present characters (Mary, John, the apostles, etc.) or not (kings, saints, donors, etc.). Sound = crying, screaming
Texts related to the liturgy are often also embroidered. Sound = hymns, out loud prayers.
There are thus three references to the various sounds associated with iconography and the liturgy that brings it to life.
Embroidered prayers must be sung or recited, sobs and cries of pain must move us.

Perhaps one of the most beautiful depictions of lamentation is the Thessaloniki epitaphios: the sobbing of one of the angels is so strong that his companion turns around as the 1st tries to stifle his sobs, in a particularly expressive gesture. In the decades that followed, we saw this expression take more and more exaggerated forms: arms raised to the sky, hair torn off, etc. 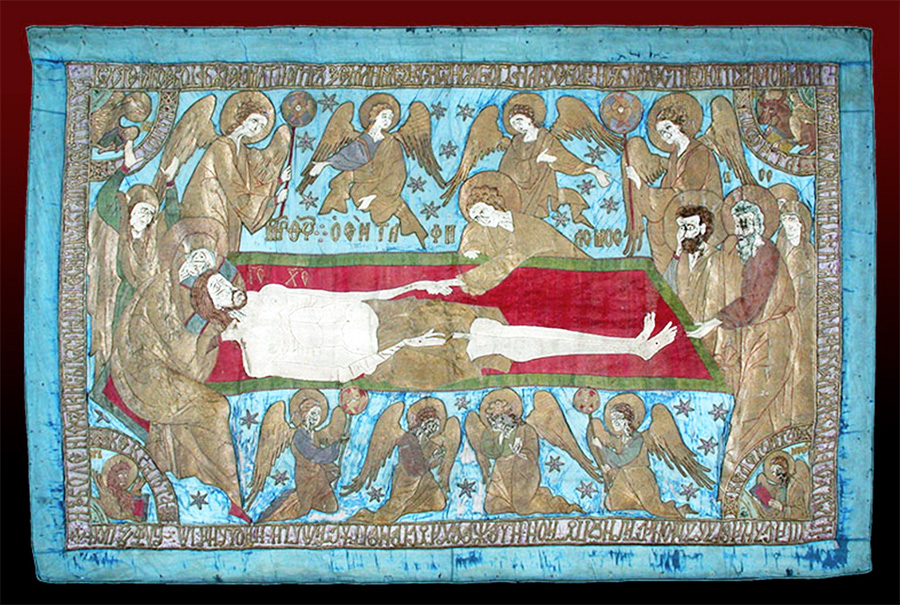 Epitaphios of Stephen the Great, 1489, 252 x 166 cm © The holy Monastery of Putna, Romania
Mary Magdalena throws her arms so high that one of them crosses the space of the evangelist John (symbolic space, out of time)

Another sound element will make its appearance: on the later epitaphioi, the symbols of the 4 evangelists are often embroidered on the 4 corners of the fabric. A few words are embroidered between them and the central motif: “Sing, cry ou, Shout, Say“. These words are spoken by the priest in the introduction to the Hymn of Victory (of Christ over death).

Note – These 4 symbols were “seen” by the prophet Ezekiel (1, 1-12) and are found in the Revelation of John (4, 6-7). They were first associated with the evangelists by St Irénée of Lyon in 180, then by St Jerome in his commentary on St Matthew in 398. This preface will be introduced in the copies of the Vulgate, which explains the general adoption of these symbols.
Man represents Matthew, who begins his Gospel with the genealogy of Christ; the Lion is Mark, who begins his Gospel with “a cry in the desert”; the bull is Luke because he speaks of the sacrifice of Zechariah and finally John is the Eagle because he begins his Gospel with the Celestial Mystery.

The epitaphioi are not the only sound-bearing fabrics – the veils separating the nave and the sanctuary (the Katapetasma) are also covered with prayers – these are said by the priest in silence, but readable by the faithful who can associate with the priest.
The names of the donors or the characters for whom these veils were embroidered are also present and were certainly to be recited during the Grand Entrance.

On the Katapetasma embroidered by Sister Jefimija, Saints John Chrysostom and Basil the Great carry scrolls embroidered with the prayers of their liturgy, spoken silently by the priests. In the lower part there is an embroidered poem that mentions the “sinful mouth” daring to address God. Silent prayers are made visible if they cannot be heard. The silent sound is thus itself represented.

Katapetasma embroidered by sister Jefimija, 1399, 118 x 144cm © Chilandar Monastery, Mont Athos
The photo does not capture the finesse of the embroidered writing, but the entire bottom of the piece is made up of a long, elaborately embroidered poem. 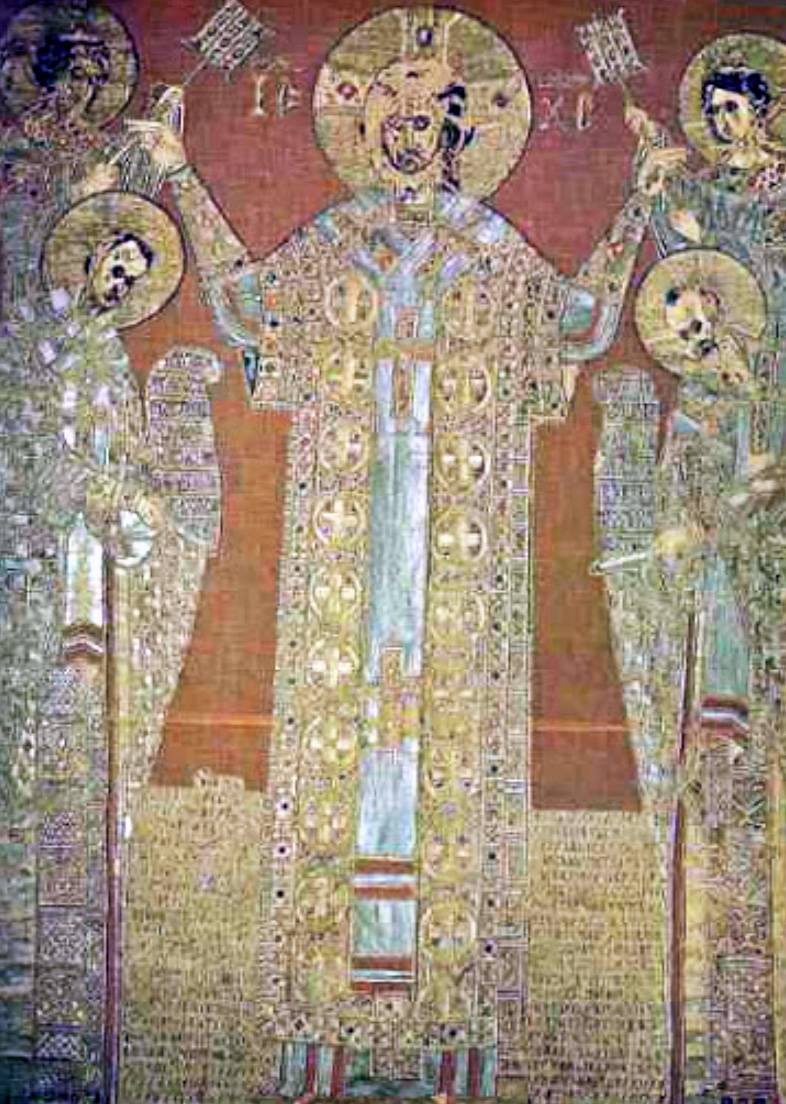 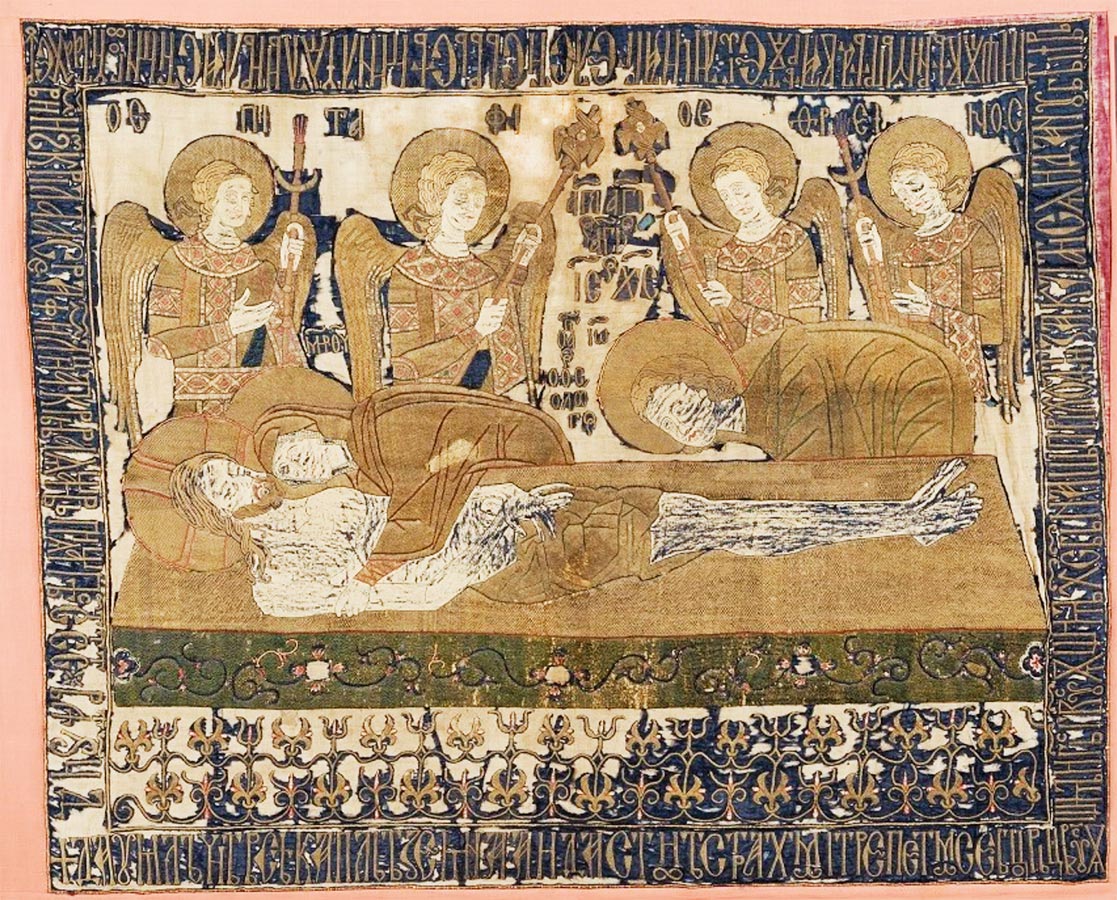 Epitaphios of Cozia – A Description

This superb piece was found in 1860 in the monastery of Cozia (Romania). It dates from 1396. The basic fabric is blue silk. Imagine the effect that the gold embroidery must have given! This color was rarely chosen and reflects a prestigious origin, either by the workshop or by the donor.
Voids and traces of attachment stitches show that pearls and precious gems were sewn to the edge.

It is to date the oldest epitaphios on which we find historical figures. Here we have a fusion between the iconography of the Aërs (fabric covering the Bread and the Wine, whose central theme was the Eucharist) and the iconography of the epitaphios, which corresponds to the renewal of the Byzantine liturgy of the time. Christ rests here on what looks more like an ornate altar than a tomb.
Finally, it should be noted that the chosen vocabulary is linked to the very precise place where this fabric was to be used. These words were to be spoken by those who were used to them. We write what we say.

Curiously, it is with an invitation to silence that the embroidered hymn begins: “Let all mortal flesh be silent and stand in fear and trembling, for the King of kings and Lord of lords Christ our God comes to be slaughtered and given as food to the faithful. Before Him go the choirs of angels with all the principalities and powers, the cherubim with many eyes, and the six-winged seraphim covering their faces and crying the hymn Holy Holy Holy.” 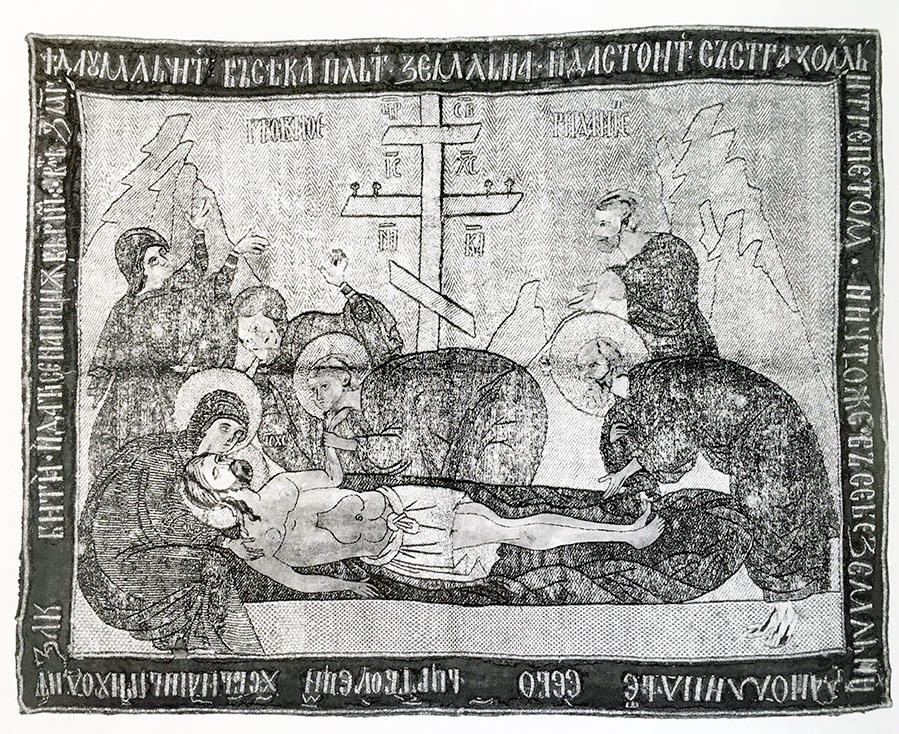